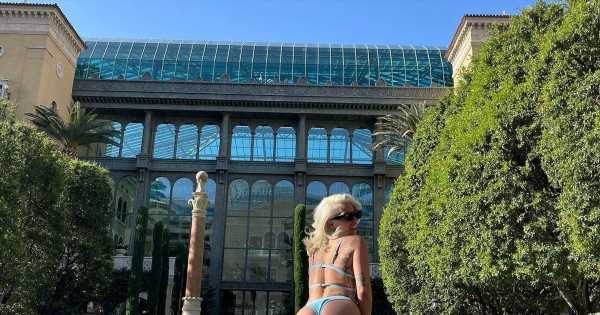 Lady Gaga has set pulses racing as she showed off her incredibly toned figure in her latest social media snap.

The 36-year-old gave her 52.3 million Instagram followers a glimpse of her peachy behind as she turned her back to the camera while wearing a baby blue thong bikini.

The 12-time Grammy award winner posed at a luxury pool in Las Vegas and let her platinum blonde locks fall just past her shoulders.

While holding on to the pool railings, the chart-topping artist shielded her eyes from the beaming Nevada sun as she donned a pair of jet black sunglasses.

She was surrounded by lush greenery and perfect blue sky as she dipped a toe into the glistening aqua waters of the pool.

Fans and followers didn't hesitate to gush over the singer's smoking-hot snap, which amassed thousands of comments and over one million likes.

One user called the A Star is Born actress the "HOTTEST WOMAN ALIVE."

"Queen of beauty," a second added.

Another user penned: "Stunning as always."

While a fourth called the star "So hot."

Lady Gaga's new track, Hold My Hand was released as a single earlier today ahead of its appearance in the upcoming blockbuster, Top Gun: Maverick.

The conversation about the songwriter's next Oscar has already begun, with several fans taking to Twitter to express their thoughts on how good her new track really is.

One fan wrote: “My God, just give it the damn Oscar."

"On my way to give Lady Gaga already her well deserved oscar for hold my hand," another penned.

While a third said: "If you need a break from the internet today since it’s a pretty dark place right now, do yourself a favour, take a break and go listen to @ladygaga's new song Hold My Hand. It’s beautiful."

Lady Gaga won her first Oscar in 2019 for Shallow from the critically acclaimed film A Star is Born, which she wrote alongside Mark Ronson, Andrew Wyatt and Anthony Rossomando.