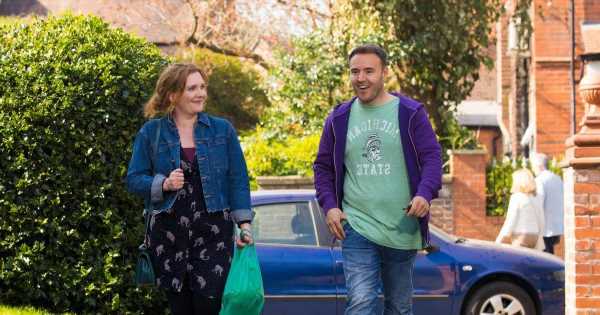 In upcoming scenes, Tyrone suggests that Fiz should stay and watch their favourite TV programme together for old time’s sake.

When he offers her a lift home, Fiz is touched and admits that she never had this when she lived at No.9.

As Tyrone pulls up outside Fiz’s new house, she offers to show him around.

Fans of the ITV soap are aware that Tyrone decided to leave Fiz after hooking up with Alina Popp.

However, Alina has since left Weatherfield and Tyrone has been trying to win back Fiz from her new love interest Phill Whittaker (Jamie McKenna).

Corrie has filmed another dramatic showdown between love rivals as the battle for Fiz affections heats up again.

In new scenes that the soap has filmed on location, Tyrone and Phill are seen coming to blows at the new house that Fiz and Phill have just moved into, together with Fiz and Tyrone's daughters.

As the pair clash, they both end up covered in concrete as they scrap among the renovations being done on the house, with spoiler both men looking pretty filthy.

After Fiz agreed to move into the new family home with Phill, she admitted to Tyrone that she had some doubts about moving away from the cobbles after calling them home for over 20 years.

Tyrone, however, made a selfless move as he told Fiz that she deserved a new start and tried to point out all the benefits that moving to the new place would bring for her and the girls.

Although he managed to hide his true heartbreak as Fiz pulled away from the street, it looks like he won't be able to keep his emotions in check for much longer.

Corrie producer Iain MacLeod promised at the beginning of the year that fans could expect more clashes between the love rivals.

He teased that he is "constantly on the lookout for when the earliest [opportunity] is for Tyrone and Phill to have another ludicrous fight".

Iain added that there is "lots more comedy feuding between those two men" to come, with "a long, brilliant and complicated story" ahead for Fiz and Tyrone.

"Once you've been hurt and humiliated like Fiz has, even if you find yourself wanting your ex back, is it that straightforward? Will pride, and your family, let you?" he said. "I think it's going to be a cracking year for that household."