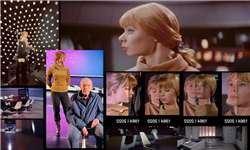 Making good on their promise to deliver a singular virtual fan experience, the cloud graphics company Otoy has mounted its first project under a sweeping rights deal with “Star Trek” creator The Roddenberry Estate.

Variety reported last summer that Otoy would produce everything from holographic and digital renderings of the famous Starship Enterprise vessel to TV and movie sets. In its first staging, the company has reunited the living original cast and crew of the first-ever “Star Trek” pilot for a rendering of a founding set.

“Gene Roddenberry created an entirely new way of seeing the world, pushing us to explore the limits of space, technology and what it means to be human. Today, new archival tools and media formats are reshaping how we share and experience history,” said Jules Urbach, CEO and founder of OTOY. Future plans for the technology include offering the virtual experiences at fan conventions around the world.