Prime Minister Scott Morrison has ruled out holding a referendum on enshrining an Indigenous Voice to parliament in the Constitution if he is re-elected, declaring it is not his government’s policy.

Morrison was quick to shut down the prospect of a national vote as an Indigenous-led campaign to make the referendum an election issue was launched with the backing of corporates and philanthropists around the country. 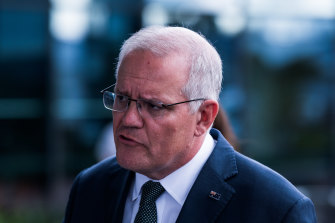 Prime Minister Scott Morrison shut down the prospect of a referendum on an Indigenous Voice while campaigning at a retirement village in the seat of Corangamite, south-west of Melbourne, on Monday.Credit:James Brickwood

“It’s not our policy to have a referendum on the Voice, so why would I be doing that?” Morrison asked while campaigning at a retirement village in the seat of Corangamite, south-west of Melbourne, on Monday.

The Voice to parliament would be a body enshrined in the Constitution that enables Aboriginal and Torres Strait Islander people to provide advice on policies that affects their lives. It emerged from the 2017 Uluru Statement from the Heart as Indigenous Australians’ preferred form of constitutional recognition, which John Howard first promised during his 2007 election campaign.

Dean Parkin, the director of the From the Heart campaign, said there were “two clear answers to the prime minister’s question”.

“Firstly, there is a longstanding existing bipartisan commitment to a referendum on Indigenous constitutional recognition. We would expect that commitment to be upheld and delivered,” he said. “The second is that the Australian public support this.”

While the Coalition promised in 2019 to hold a referendum on Indigenous recognition during this term of parliament and allocated $160 million to the process, which did not happen, its policy is to establish a Voice through legislation rather than a national vote.

It has since completed a co-design process for a legislative model, led by prominent Indigenous leaders Tom Calma and Marcia Langton.

When Morrison was asked in April about whether he would progress with the Uluru Statement, he said: “That is not our policy either. Our policy is to build up a Voice from the ground up and that is the process that we have been going through with [Calma and Langton] and that is being heard by the minister for Indigenous Australians.”

But Parkin said there was “no option for Indigenous constitutional recognition other than a Voice to parliament”.

“It is the government’s longstanding policy for a referendum on Indigenous constitutional recognition. The Uluru Statement from the Heart settled [what that would look like] definitively,” he said. “At a time when people are looking to political leaders to deliver upon their promises, we think there’s a very strong case that there should be a commitment to a referendum in 2023.”

If a referendum were held, it would be the first since Australia decided against becoming a republic in 1999.

Opposition Leader Anthony Albanese committed to enshrining a Voice to parliament in the Constitution during Labor’s campaign launch in Western Australia on Sunday but did not give a timeframe.

“I am proud to promise our Labor government will work with First Nations people to implement the Uluru Statement from the Heart in full,” Albanese said.

“This will be an uplifting moment of healing and unity for our country, in the same spirit as the national apology to the Stolen Generations, delivered by prime minister Kevin Rudd.”

Greens leader Adam Bandt last month signalled his party’s preference for Truth and Treaty – two other components of the Uluru Statement – to come before a Voice to parliament.

“If we do it the other way around, then we set up for the terrible prospect that [the Voice referendum] may not succeed,” he told the ABC Insiders program on Sunday.

But he said the Greens would not block action on the Voice if it came first. “We’re not going to stand in the way of any genuine reforms, including [a Voice to parliament],” he said.

The campaign’s preferred date for a referendum would fall on Saturday, May 27 2023: the 56th anniversary of the 1967 referendum that amended the Constitution by allowing the government to make laws for Indigenous people and include them in the census.