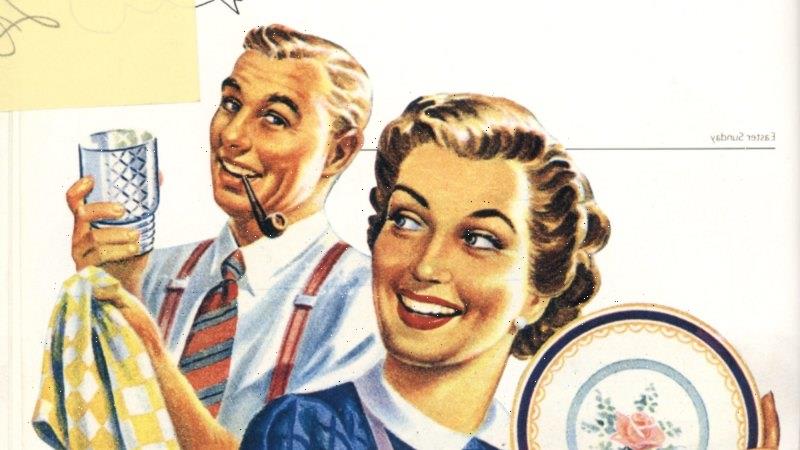 Washington: In 2013, when Betty Choi was pregnant with her first child, she made three times as much money as her husband, who, like her, was also a doctor.

At the time, Choi worked two jobs – as an attending physician and a medical writer. Her husband was working an intense schedule during his fellowship years, she said, often logging 100-hour weeks. 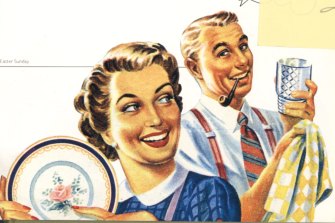 Women who earn more money, get saddled with more housework, a study shows.

But while Choi greatly out-earned her husband, she also did more of the housework and child care for about three years, she said.

For a while, the couple had a part-time nanny, but balancing two careers, first-time parenthood and maintaining a home was difficult, Choi said. She remembers doing the cooking and cleaning, and sometimes not seeing her husband in the morning or after work.

As a pediatrician and a writer, Choi shifted more of her time toward her writing, because of her interest in it and the flexibility it offered. Even though her husband was willing to do more around the house, their work distribution did not allow them to approach the tasks evenly, she said.

That unequal distribution of domestic labour falls into a pattern documented in a recent analysis published in the journal Work, Employment and Society. New mothers take on more housework than their husbands – and even more so when the woman makes more money than him, according to the article by Joanna Syrda, a professor at the UK-based University of Bath School of Management.

“We see these top female earners as compensating in doing more housework,” Syrda said, “not when women out-earn their husbands but when mothers out-earn fathers. So parenthood seems to have that traditionalising effect.”

Syrda’s study used research from the Institute of Family Studies and examined the relationship between spousal income and division of housework from more than 6000 dual-income, heterosexual married couples between 1999 and 2017.

Women with children reduced housework from 18 to 14 hours a week as they went from earning zero to half of the household income. But after passing her husband’s salary, a woman’s home tasks increased to nearly 16 hours a week, the analysis found.

In contrast, a man’s housework ranged from six to eight hours a week when he was the primary breadwinner but then declined as his wife out-earned him.

Syrda posited that women out-earning men bucks traditional gender stereotypes, so women do more housework to compensate and men do less. That hypothesis corresponds with her other research on couples’ income and male psychological distress.

“Men have very high stress levels when they are the only breadwinner, understandably, and lowest when their wife brings in around 40 percent of the household income,” she said. “Because, importantly, it is less than half.”

The findings also correspond with other studies that found women with unemployed husbands still did considerably more housework than their husbands. But this research specifically looked at heterosexual couples with children. 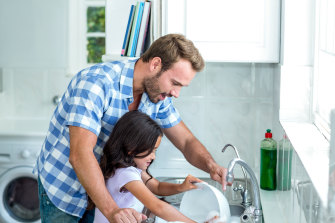 There must be a place for men in the conversation.Credit:Shutterstock

While counterintuitive to some, these findings did not surprise economist Misty L. Heggeness, who has also conducted research on dual-income households and the distribution of domestic work.

“Not only are societal gender norms stronger around parenthood, biologically women end up spending disproportionate time with young kids due to birth, breastfeeding and the bond that develops out of those activities,” she said.

This translates into many tasks – changing nappies, putting children down for naps, cooking, taking care of appointments – falling disproportionately on women, she added.

That’s where Choi found herself logging more hours than her husband, she said.

One of their two children has food allergies, so cooking and preparing food became more time-consuming. She also said she became the default “on call” parent in case something happened at school. 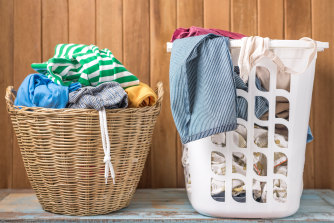 The couple talked through how to more evenly split tasks, which was made easier when her husband’s fellowship ended and his work transitioned to more-manageable hours, Choi said.

These days her husband, who now earns more than her, does all of the cooking on the weekends, does “tons of laundry” and helps get the kids ready for school because his day now starts later, she added. During the pandemic, even though he also worked most weekends, he took charge of the kids when he could so Choi, now an author, could meet her book deadline.

“I give him a lot of credit,” Choi said. “He loves being involved, and we have learned to communicate our needs.”

Historically, American women have taken on more responsibilities at home because they have not been able to work outside the home or have worked fewer hours and earned less, because of limited access to higher-paying jobs.

But since the 1970s, even as women’s participation in the labour force and salaries have risen, men have still not taken on an equitable share of housework.

During the pandemic, this was laid bare as millions of women dropped out of the workforce amid remote schooling and a lack of child care.

Biology, social constructs and persisting traditional perceptions regarding gender can all play a role, experts say. Research has shown that women earning more than their husbands can put stress on a marriage (increasing the likelihood of divorce by 50 per cent) and prompt partners to lie about their incomes.

Like Choi, Sarah Tuttle, an astrophysicist and assistant professor at the University of Washington, and her husband have alternated being the higher-earning spouse. In graduate school, they had similar salaries. But in her field, post-docs made more than those in her husband’s.

“Earlier in our relationship, I absolutely took on many more of the roles. When he did stuff, I’d be like, ‘Oh, I hate how you do this’ . . . all of those stereotypes,” she said. “Then we worked through a bunch of it.”

There were also structural biases to fight, Tuttle said. Throughout parenthood, others have assumed she would be the point of contact for school, activities and appointments. Just recently, her husband tried to make a doctor’s appointment for their son and the office instead called her, Tuttle said.

Now, her husband is about to take a job at a large tech company, and his salary will be larger than hers. But he often cooks dinner, because he works from home, and he does the laundry, Tuttle said.

“It worked out the way it worked out because we really intentionally had those conversations,” added Tuttle, who’s in her mid-40s.

That kind of communication and re-centering has been key to the balance in her marriage, she said, especially after a stressful period during the pandemic. Tuttle said that as they had to manage remote school, their careers and their home, they initially retreated into traditional roles, with her taking on the organisational and emotional part of their family’s work.

Heggeness, the economic researcher, said that “there is literally no reason why men cannot engage in household chores equally to women, especially when children arrive. It just takes more assertive engagement from men to take the lead on certain tasks.”

Choi acknowledged that despite her husband being a willing partner, it also takes constant communication – from both sides.

“You have to voice your needs,” she said, adding with a laugh, “I’ve learned to be more compassionate in my delivery.”