An exotic bird normally found in the Mediterranean is expected to start breeding in the UK this year due to Britain’s warming climate.

The glossy ibis is to ‘make wildlife history’ and may start breeding in the UK this spring and summer, according to the Met Office and RSPB.

Extremely dry conditions in the south of Spain and Portugal, and mild winter temperatures here have already encouraged large number of glossy ibis – a distant relative of storks and herons – to spend the winter here.

Birdwatchers are hoping this could lead to the first nesting in the UK of a wetland bird found mainly in the Mediterranean. 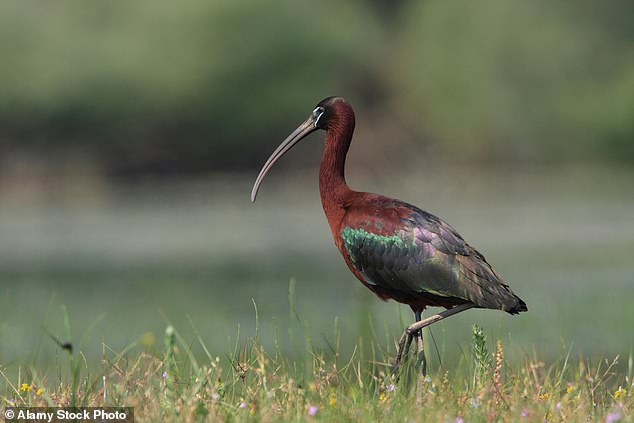 The glossy ibis (pictured), which mainly lives in Mediterranean countries like Spain and Greece, will expected to breed in the UK for the first time ever thanks to warmer weather here

The glossy ibis can be found near wetlands in warmer areas of the country, pictured is a juvenile glossy ibis spotted in Dorset

Grahame Madge, from the Met Office, said: ‘Although it is tempting to speculate about which species may arrive in the UK, many of our traditional species are losing out, especially in southern England, as their ranges shift further north.’

Malcolm Ausden, an ecologist with the RSPB, has recently co-authored a paper on the prospects of the glossy ibis nesting for the first time in the UK.

He said: ‘The glossy ibis is a bird which is largely found in extensive wetlands in warmer climes. It is one of the world’s most widespread birds, being found from southern and eastern Europe through central and southern Asia to Australia, across Africa and also in the Atlantic and Caribbean region of the Americas.

‘In common with a number of wetland birds the glossy ibis has to be able to cope with occasional periods of drought and this strategy may force a shift to new locations should existing areas become unsuitable.

‘In fact, the glossy ibis did make a leap across the Atlantic, colonising the warmer parts of the Americas from the 19th Century onwards. So this species has a proven track record of colonising new areas far from its traditional breeding grounds.

‘Weather conditions in Spain were extremely dry last winter and this encouraged a large number of glossy ibises to disperse north to the UK where they encountered milder-than-average winter conditions. Glossy ibises are unable to survive prolonged periods of cold weather.

‘We still have large numbers of glossy ibises across the UK and if they remain here they may well see the UK as a good place to nest.’

Dr Mark McCarthy, head of the Met Office’s National Climate Information Centre, said: ‘UK temperature has risen by close to 1C in the last 60 years as a consequence of global climate change. We see this across all seasons, and for the 30-year period between 1961-1990 the mean winter temperature was 3.3°C.

‘By 1991 to 2020 the 30-year average winter temperature had risen to 4.1°C. One consequence of our changing climate is that it is already influencing the range of some of the flora and fauna that can make their home here.’