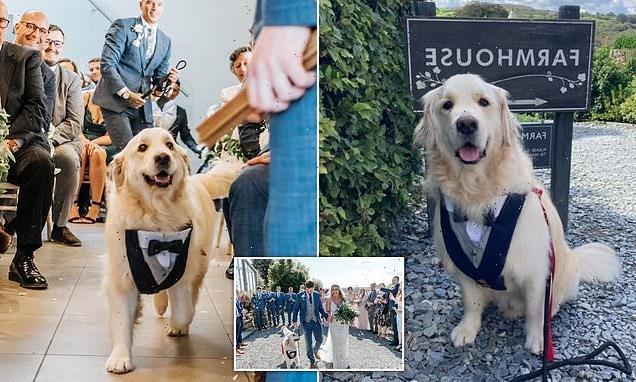 Til death do us BARK! Bride and groom share adorable snaps of their Golden Retriever as a ring bearer – and he even walked down the aisle in a three-piece ‘suit’

For most couples on their big day, the ring bearer is a young relative – however, one bride and groom enlisted the help of their beaming Golden Retriever.

And it seems pet Nico couldn’t have been happier to be part of his owners’ big day as he appears to be smiling non-stop in wedding photographs from the celebration.

Dressed in a homemade £5 three-piece suit attached to his harness, the dog stole the limelight when performing his role as ring bearer at the ceremony of Morwenna Negus, 28, and Macaulay, 26, from Pool, in Cornwall.

The couple, who always knew they wanted their four-year-old dog to be an important part of their wedding, finally tied the knot after having to cancel their nuptials five times due to Covid. 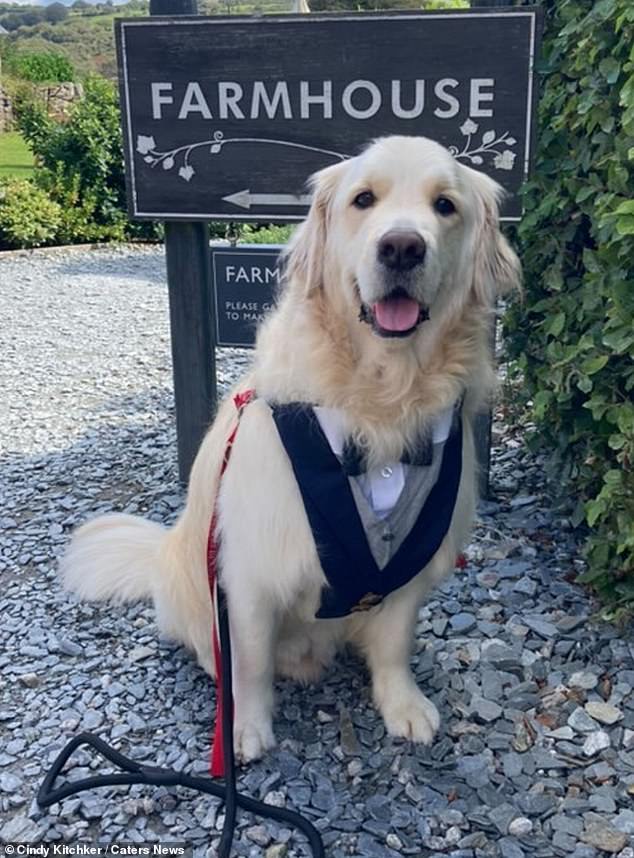 Nico couldn’t stop smiling as he walked down the aisle as a ring bearer at the wedding of his owners, Morwenna and Macaulay Negus 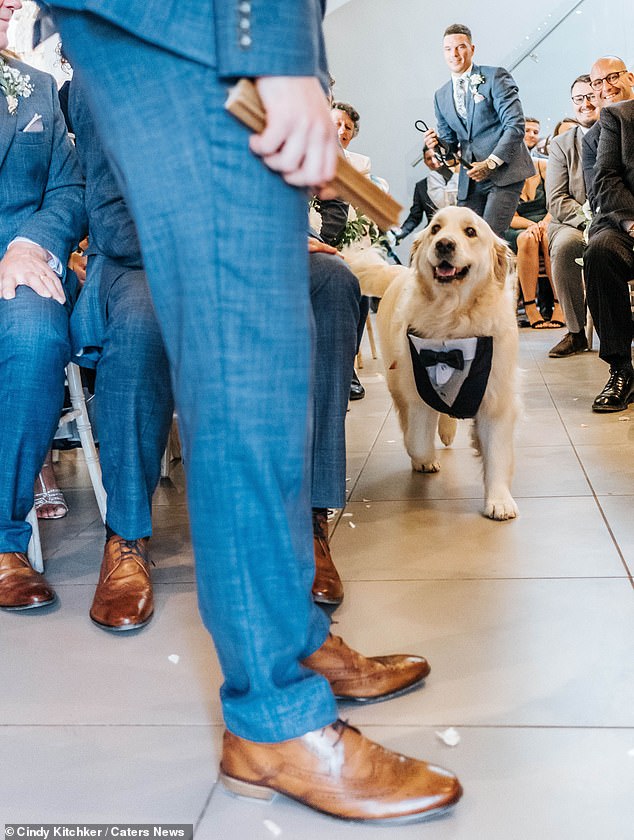 The moment: Nico smiling as he walks towards his owner Macaulay holding his biscuit as he delivers the rings

Dressed the part, Nico had a three-piece dog suit attached to a harness, made exclusively by Morwenna.

She explained: ‘I stumbled across wedding inspiration on Pinterest and then saw adverts for mini dog suits for sale. You couldn’t buy suits for larger dogs, and small dog suits were being sold for £150.

‘So, I decided I would make my own, it cost me £5. I just used an old suit and cut it up and added the buttons.

‘I made it look like it was a three-piece suit, but it was actually all sewn together as one and it was fitted onto his harness, so as far as he knew it was just a harness he was wearing. He had no idea how cute he looked.’ 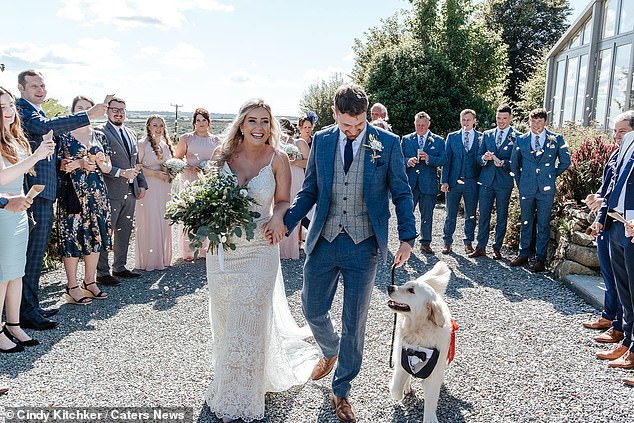 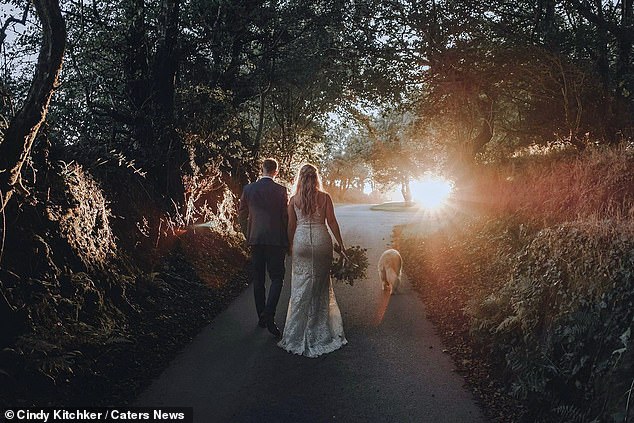 Nico was adopted as a puppy and the couple say he’s like their first child.

Morwenna, who works as a management accountant, added: ‘I knew he had to be a part of the wedding somehow, so one of the first questions we asked when viewing the venue was if it was pet friendly.

‘We were lucky that our dream venue allowed him to be there, and that’s when we decided he was going to be our ring bearer.

‘You see your wedding as a significant moment in your life, you remember everything, and everyone there, so we needed Nico there too.’

Morwenna and Macaulay, who is a vehicle technician, also decided to hire a dog nanny, Sarah, from Wedding Day Dog Nanny, to look after him throughout the day. 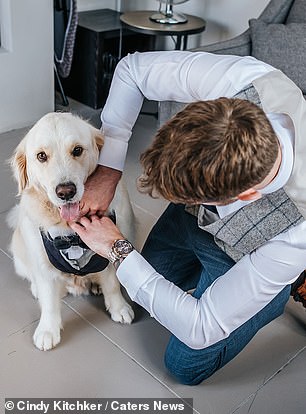 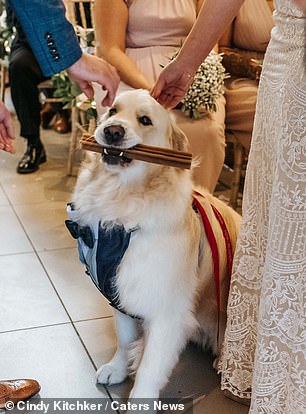 Groom Macaulay dressing Nico with his harness and three-piece dog suit before the wedding (L), and Nico with his prized treat after his job was complete (R)

‘She was brilliant. She looked after him the whole day. She came in the morning and was dressed for the occasion too.

‘She chaperoned him around all day and made sure he was in the photos and was behaving. I don’t know if we would have been able to have him there if it wasn’t for her.’ 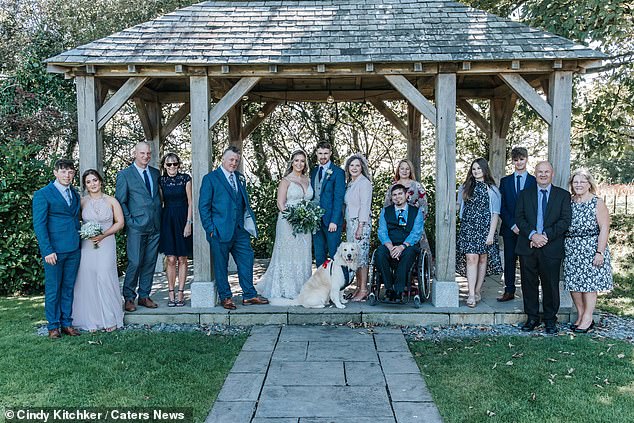 Morwenna and Macaulay decided to hire a dog nanny from Wedding Day Dog Nanny, to look after Nico throughout the day, so it meant the newlyweds could relax knowing he was taken care of

‘As he walked down the aisle he strutted, he looked so chuffed, he loves attention and he was definitely the centre of attention. Not many people knew he would be there, so he took the spotlight.

‘We had a huge dog treat at the end of the aisle to get him to come to us, and as soon as he got it he ran straight outside with it, we just managed to get the rings off him.

‘He wasn’t meant to be at the evening party, but a friend went and got him. Everyone loved him. He had so many treats and ate nearly half of the pasties, we wouldn’t have had it any other way. He partied with us all, it was so special.’