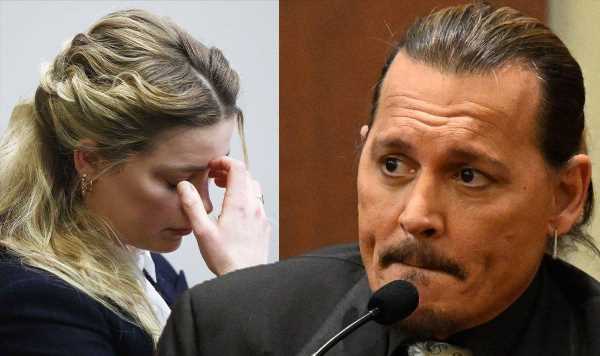 Johnny Depp claims he was a victim of domestic violence

Johnny Depp, 58, has been making headlines over the last few weeks as his libel trial against his ex-wife Amber Heard, 36, has rolled on. In the trial’s latest update, Johnny has claimed he was the victim of domestic violence during their marriage.

The actor took to the stand to conclude his testimony in the $50 million libel case against Amber.

Camille Vasquez, Johnny’s lawyer finished with the question: “What did you say in response when Ms Heard said, ‘Tell the world Johnny, tell them I Johnny Depp, a man, am a victim too of domestic violence?'”

During his testimony earlier in the day, the Hollywood actor admitted that he was “ashamed” of texts he had sent to fellow actor Paul Bettany.

Johnny had sent several texts, including seemingly threatening messages concerning Amber, to his friend, where he suggested he wanted to “burn” and “drown” his ex-wife.

The Pirates of the Caribbean star said he shared an “abstract sense of humour” with Paul and the jokes were based on a Monty Python sketch.

The court had previously seen a text exchange between Johnny and Paul in 2013.

Johnny had written: “Let’s burn Amber. Let’s drown her before we burn her. I will f*** her burnt corpse afterwards to make sure she’s dead.”

Johnny, defending himself, claimed that this was how the friends dealt with hard moments and they were never “intended to be real”.

He continued: “As these are private texts there was a lot … in context.

“It’s important to know none of that was ever intended to be real, and the language used, which yes I am ashamed [of] has to be spread on the world like peanut butter.

“For example, the text that is about burning Ms Heard is directly from Monty Python and the sketch about burning witches and then drowning the witches.”

He continued: “This is a film we had all watched when we were 10, it is just irreverent and abstract humour.”

Johnny then furthered his point by saying that his friendship with Paul was viewed as a “threat” by Amber.

He told the court: “Ms Heard despised Mr Bettany, mainly because we had become such close friends. For her he was a threat and would take me away from her.”

The Hollywood actor is suing Amber for defamation over a 2018 article she wrote in The Washington Post. Johnny’s lawyers say the piece falsely implies that he physically and sexually abused her.

Amber describes herself as a “public figure representing domestic abuse” in the lengthy article.

Johnny claims the article, which does not mention him by name, is defamatory and derailed his career.

He has subsequently been stripped of his Jack Sparrow role in the Pirates of the Caribbean franchise, along with being replaced by Mads Mikkelsen in the Fantastic Beasts films.

Amber is counter-suing her ex-husband for $100 million and the case is expected to last around six weeks.

The couple were married for one year before Amber filed for divorce in 2016.