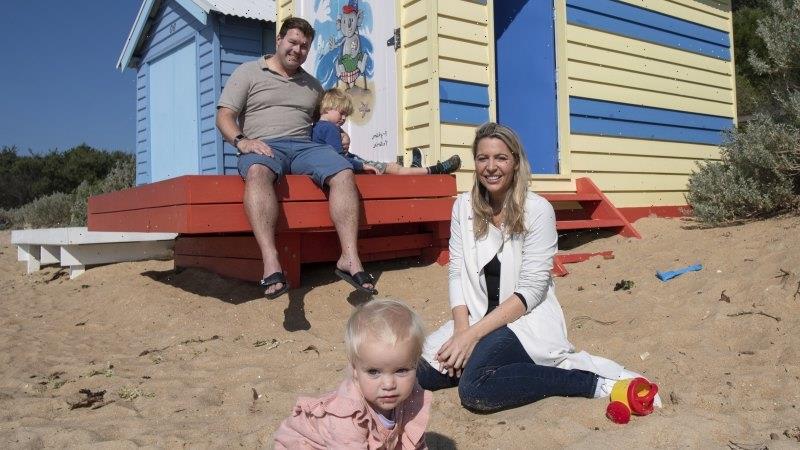 It will cost $3 million to save one of the most Instagrammable scenes in Melbourne due to increasing sand erosion that threatens the picture-postcard Brighton bathing boxes.

Bayside City Council is scrambling to protect the 96 colourful sheds, most of which were built at water’s edge in the 19th century to protect the modesty of bathers in demure colonial times and now sell for more than $300,000 each. 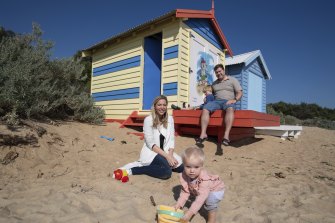 Next month the council, which owns the heritage-protected Dendy Street beach (most other Melbourne beaches are Crown land) will import sand from north Brighton beach to “renourish” the boxes after sandbagging at the southern end failed.

“We can’t do much about the rising seas, but we can do something about the storms,” Bayside mayor Alex del Porto said.

“We have the iconic photo of Melbourne with those Dendy Street bathing boxes. We are here to say we need the state and federal governments to assist us.”

Consultant Matthew Graham, 38, and wife Jenna paid more than $300,000 three years ago to buy their box – known as the “koala box” – at the southern end of the beach. 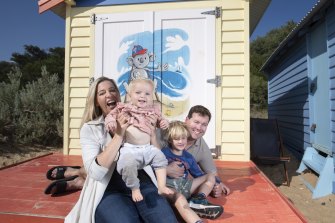 The Grahams paid more than $300,000 three years ago for the “koala box”.Credit:Penney Stephens

“We have lived in the area for some time and were familiar with the beach and the erosion issues,” he said.

It would be nice to see governments and business doing more to address the effects of climate change, he said.

“Obviously if sea and storm damage consumes my box they will be consuming coasts around the world, so it has to be in perspective. I don’t think we are pushing against the tide, so to speak.”

The worsening situation has forced Bayside council to consider building a protective groyne or a breakwater, which the mayor said would cost $3 million.

Long ago, the boxes were moved beyond the high-tide line, and in 2013 the Dendy Street Beach Masterplan recommended the installation of new bathing boxes at the southern end of the beach.

But the Brighton Bathing Box Association and Brighton Foreshore Association warned the southern part of the beach was vulnerable.

The association told the council there would be a higher risk building boxes at the southern end of the beach, he said. 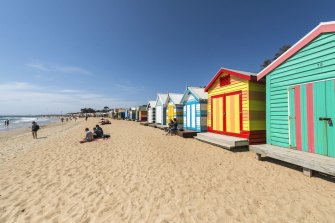 The row of Dendy Streeet beach boxes is a well-known Melbourne scene, and popular with photographers, both professional and amateur. But the council says the boxes are under threat from erosion.Credit:Domain

“Professor Weston Bate years ago warned Alex del Porto, a still-sitting councillor, never to build boxes at the south end of the beach where they have been traditionally washed away, and Alex responded ‘caveat emptor’ [let the buyer beware],” said McQuire, who attended a meeting between the local historian and the councillor in October 2013. 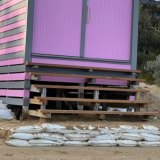 The expensive boxes – one sold for $337,000 in 2018 – have no electricity, no running water and need to meet strict decoration guidelines. They can only be bought by locals, who don’t even gain a title over them – merely a lease of perpetuity – but do have to pay rates of about $1000 a year.

Local real estate agent Nick Johnstone has sold some of the boxes. “They are still incredibly highly sought after and very tightly held. The last sale was around $370,000,” Johnstone said. “They are a great fun thing to have, and they just switch from generation to generation. I wouldn’t be surprised if the prices go up.”

Coastal erosion is a wider headache for Bayside Council. Brighton was third in a list of Melbourne suburbs most at risk from coastal erosion, a report from CoreLogic warned in March, with houses and apartments worth $415.4 million vulnerable.

“We are confident with the renourishment we are starting and the longer-term engineering will address the issue of erosion for the next 50 to 100 years,” the mayor said.

A guide to the environment, what’s happening to it, what’s being done about it and what it means for the future. Sign up to our fortnightly Environment newsletter here.