An artist doesn’t always know they’ve created the “greatest ever” of something.

Gene Kelly certainly didn’t. And yet many cinephiles would say “Singin’ in the Rain” is the greatest-ever movie musical. Those who are on the fence about it now have another chance to assess: Warner Bros. Home Entertainment just released a 4K ultra-HD Blu-ray restoration of the movie, which Kelly co-directed with Stanley Donen, for its 70th anniversary.

In a new interview with IndieWire, Kelly’s widow and biographer, Patricia Ward Kelly, talked about the idea of cinematic greatness and what exactly it means — including for when we talk about new movie musicals being made today. Are today’s musicals pushing the medium forward the way “Singin’” did? Are they expressing as personal of a vision? Are they trying to do something new?

Though not naming names about specific recent musicals, Ward Kelly thinks her husband would have found those being made today “a bit regressive, honestly. I think that he would think that maybe we’re going backwards a bit, because oftentimes you look at the dancing, the dancing is very much like the 1930s and ’40s. It’s a line of people lined up. And they’re more like Pepsi commercials and things, as opposed to the camera in there moving. The camera’s often stationary, or the camera is zinging around almost out of control and then you see just body parts flying. That was anathema to Gene.”

The insight with which Ward Kelly speaks — using academic film terms such as “the camera eye” — is startling at first, until you learn she’s a writer herself. She met Gene in 1985 when she was writing for a show he was hosting and he quickly enlisted her in writing his memoir, then married her. She’s still working on that biography more than 25 years after his death, but she’s been busy as the trustee of The Gene Kelly Image Trust, which protects the use of his likeness. And she has a mountain of material: she recorded his words every day for over a decade. Along the way, she’s been evangelizing for her husband’s legacy, including standing up for his cinematic values.

“You don’t cut in on a closeup of the hand or a closeup of the feet [during a musical number],” she said, like reciting a statement of principles. “And you don’t put the camera on the ground and shoot up and distort the body. You shoot head on, in full figure. And so I think he would think that we need to slow it down and trust the audience. I’ve been on panels where people say, ‘Well, we really have to dumb things down now, especially for young people, because they have no attention span.’ Then why have I seen kids lining up to see ‘Singin’ in the Rain’ not once, not twice, but they’ll see it 10 times.” 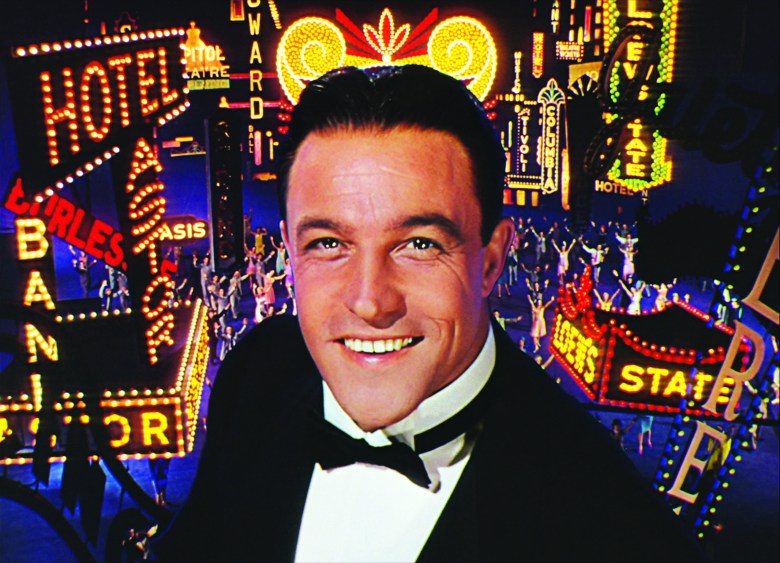 Pushing forward the way dance is captured on film was always a passion of Kelly’s. Even in the 1985 clip-based anthology film “That’s Dancing,” he praised breakdancing, and showcased Michael Jackson’s “Beat It” video. That progressive instinct in his work has led some film scholars to try to act like “Singin’ in the Rain” is Kelly making fun of his predecessor Busby Berkeley, with his overhead shots of massive groups arranged in kaleidoscopic formations, in films such as “Gold Diggers of 1933.”

“It was never with disrespect,” Ward Kelly said. “Gene started his film career with Busby Berkeley in ‘For Me and My Gal’! He just knew that Berkeley was trying to capture a hundred violins [playing] or something. It wasn’t about the movement of the dance. And Gene was trying to say, How do we use this camera — as he called it, a ‘one eyed monster’ — to capture a three-dimensional art form, which flattens the art form? So it was always Gene trying to figure out how, without the advantage of 3D technology, even though he’d experimented with it, just figure out how best to use the camera for dance.”

Ward Kelly has given this major thought. When I suggest that “Singin’ in the Rain” takes a similar approach to Baz Luhrmann’s “Moulin Rouge” in only having a couple original songs, with the rest being repurposed and reimagined preexisting songs, she immediately breaks down the differences in their authorial vision. “Gene’s only using one camera,” Ward Kelly said. “And Gene said, ‘I edited in the camera. I edited in the can.’ Baz Luhrmann is shooting dance from eight and nine cameras. And then he took the material and turned it over to editors. So the editors crafted it. And Gene had it all in his head. And each shot is connected to the next by musical beats. So there’s no way. He knew exactly that this piece had to fit with that. They’re like puzzle pieces. You don’t throw this piece in because you want to.”

It was about evolving the portrayal of dance with each film, not about creating the musical of all musicals. “Nobody thought [‘Singin’’] would become that,” Ward Kelly said. “[Co-writer] Adolph Green was the only person who really thought that it might have legs. And the others thought that ‘An American in Paris’ would be the sine qua non of the American movie musical. But interestingly also, Stanley Donen did not think ‘Singin’ in the Rain’ wouldn’t make it at all.”

Sometimes it’s hard to recognize what’s right in front of you. With Ward Kelly’s advocacy for her husband’s legacy, she’s helping ensure we won’t just watch his films — we’ll really see them.