The ABC will announce who will replace Leigh Sales as the host of flagship current affairs program 7.30 imminently, with former Four Corners host Sarah Ferguson considered the most likely choice.

The broadcaster has been hunting for a new 7.30 presenter since Sales announced she was stepping down in February, after 12 years in the job. The role is one of the highest profile on-screen jobs in the ABC, and involves interviewing senior politicians on all sides of politics, key business figures and international celebrities. 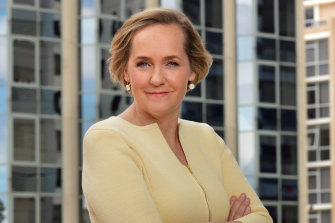 Sarah Ferguson, former host of Four Corners, is a strong chance to take over from Leigh Sales on 7.30.Credit:ABC

Despite some speculation that the ABC would look externally to replace Sales The Sydney Morning Herald and The Age understand the most likely candidates are internal. They include 7.30’s chief political correspondent Laura Tingle, Insiders host David Speers, the ABC’s international affairs analyst Stan Grant, and Ferguson.

As well as hosting Four Corners the Gold Walkley-winning Ferguson has presented a number of documentaries on the ABC, including Hitting Home and Revelation, the latter of which is a three-part series on sexual abuse cases in the Catholic Church. She currently resides in Washington and has a wide brief to cover US and international affairs for the ABC. Last month she reported on the war in Ukraine for Four Corners.

Ferguson’s appointment would see her return to the ABC’s Ultimo headquarters after a number of years overseas. She previously hosted 7.30 for six months in 2014, while Sales was on leave, and conducted a number of memorable political interviews including with then Minister for Immigration and Border Protection, Scott Morrison.

The process to find a new host for 7.30 has been slowed down by the broadcaster’s need to first find a news director. In March, Justin Stevens, the executive producer of 7.30, was appointed the role, replacing Gaven Morris who stepped down last year.

With Stevens now in the role the ABC is preparing to announce Sales’ replacement in the next few weeks. It is also currently looking for executive producers to helm both 7.30 and Four Corners, and while a selection process is ongoing for both those roles the decision to appoint high-profile positions on screen has traditionally been at the discretion of the news director.

Sales is leaving her 7.30 post in June, after seeing out this year’s federal election.