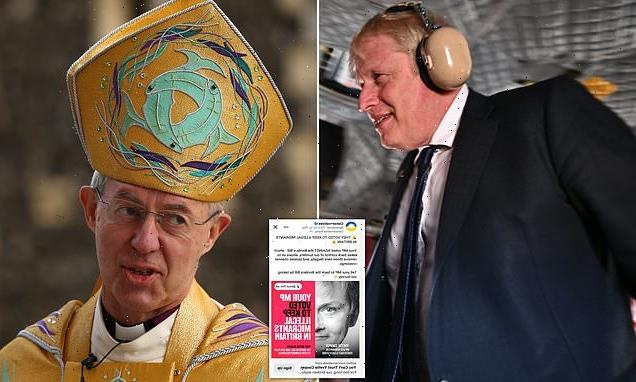 Boris Johnson today doubled down in his row with the Church over his plan to fly thousands of migrants to Rwanda, branding the scheme ‘morally right’.

The Prime Minister has this week become embroiled in a war-of-words with top clergymen about the £120m agreement struck with the African country.

Under the new policy, migrants who enter Britain illegally will be sent 4,000 miles away for processing.

The Archbishops of Canterbury and York have slammed the proposed scheme to send some aslyum seekers on a one-way trip.

They have spoken out on ‘moral and ethical grounds’ against the plans.

The Archbishop of Canterbury, Justin Welby, used his Easter Sunday address to claim the policy cannot ‘stand the judgment of God’.

The row deepened when Mr Johnson told Conservative MPs at a private meeting that Church leaders had ‘misconstrued the policy’.

The PM was also said to have suggested senior clergymen had been ‘less vociferous’ in their condemnation of Vladimir Putin’s barbaric assault on Ukraine than about his new migration plans.

Mr Johnson defended his remarks to MPs and the Rwanda plan as he spoke to journalists on his trip to India.

‘I have a very good relationship with the Archbishop,’ he said.

‘All I was saying was I think we have an excellent policy to try to stop people drowning at sea, in the Channel, and I was surprised to find it criticised.

‘I think it’s the morally right thing to do, to stop criminal, cynical gangs from exploiting people and sending them to a watery grave. I think it’s a sensible, brave and original policy.’ 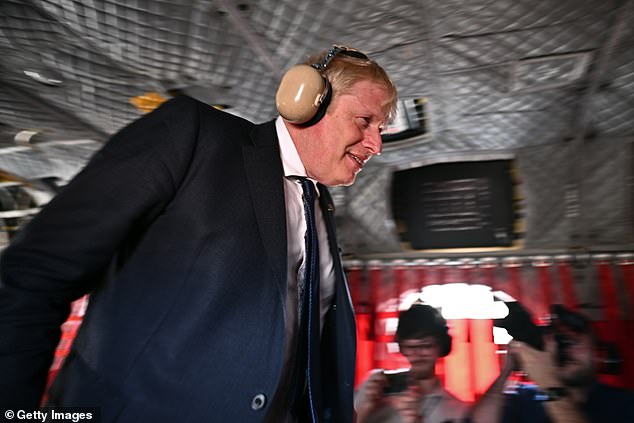 Speaking on his visit to India, Boris Johnson said his plan to send some migrants to Rwanda was the ‘morally right thing to do’ 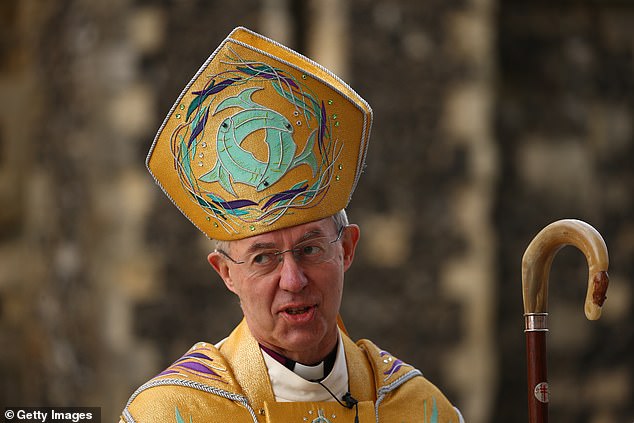 The Archbishop of Canterbury, Justin Welby, used his Easter Sunday address to claim the new migration policy cannot ‘stand the judgment of God’

The PM denied claims that he had also used the private meeting to blast the BBC’s coverage of his Rwanda scheme.

‘What I said was, and I was very mild, I’m surprised this has engaged such a response,’ he added.

‘All I said is I thought the policy had been misconstrued on the BBC and by some parts of the clergy, that’s what I said.’

It was today revealed that Home Secretary Priti Patel is facing an internal mutiny over the Rwanda asylum deal with some staff threatening to strike.

Certain Home Office employees branded the policy ‘totally unethical’ and asked if they can refuse to work on the scheme.

Yesterday, the Archbishop of Canterbury refused to back down in his row with the PM and lashed out at Mr Johnson.

Lambeth Palace said both the Archbishops of Canterbury and York had ‘condemned Russia’s invasion of Ukraine as an act of great evil and spoken out repeatedly against it’.

A spokesman said the pair remained ‘gravely concerned’ by the Rwanda proposals’ and added they would ‘continue to speak out against these plans on moral and ethical grounds’.

A fresh row over the Government’s Rwanda plans also erupted today after Conservatives put the issue at the heart of their campaigning ahead of next month’s local elections.

In a series of adverts, the Tories targeted Labour MPs and claimed they had ‘voted to keep illegal migrants in Britain’. 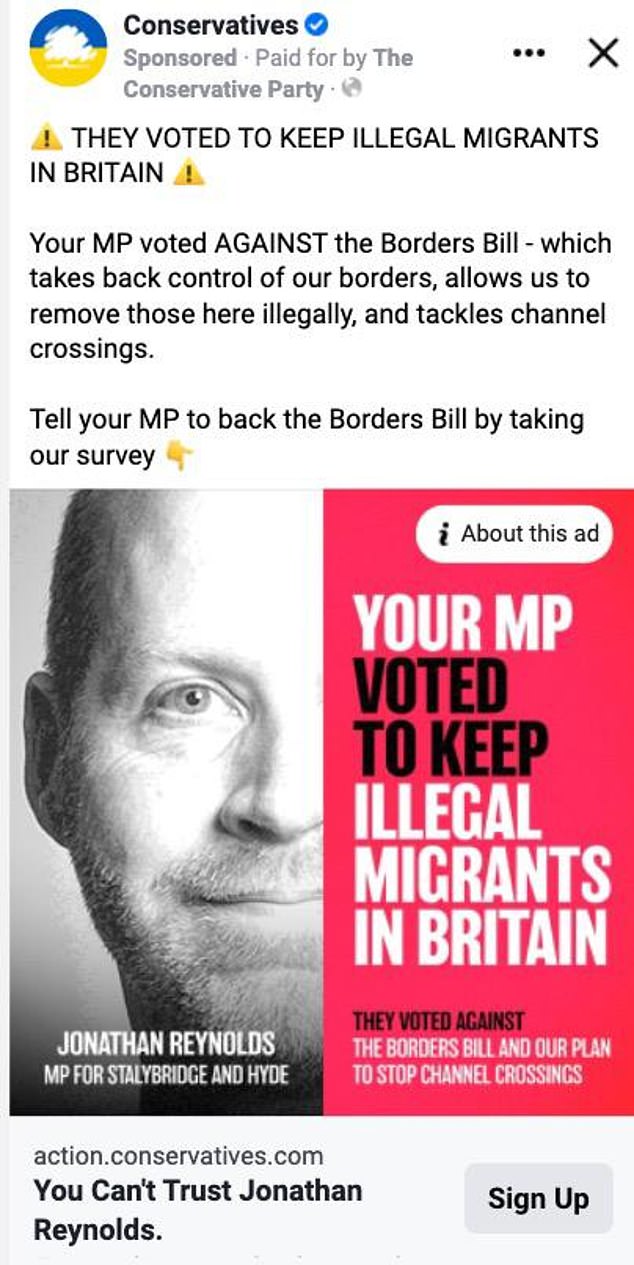 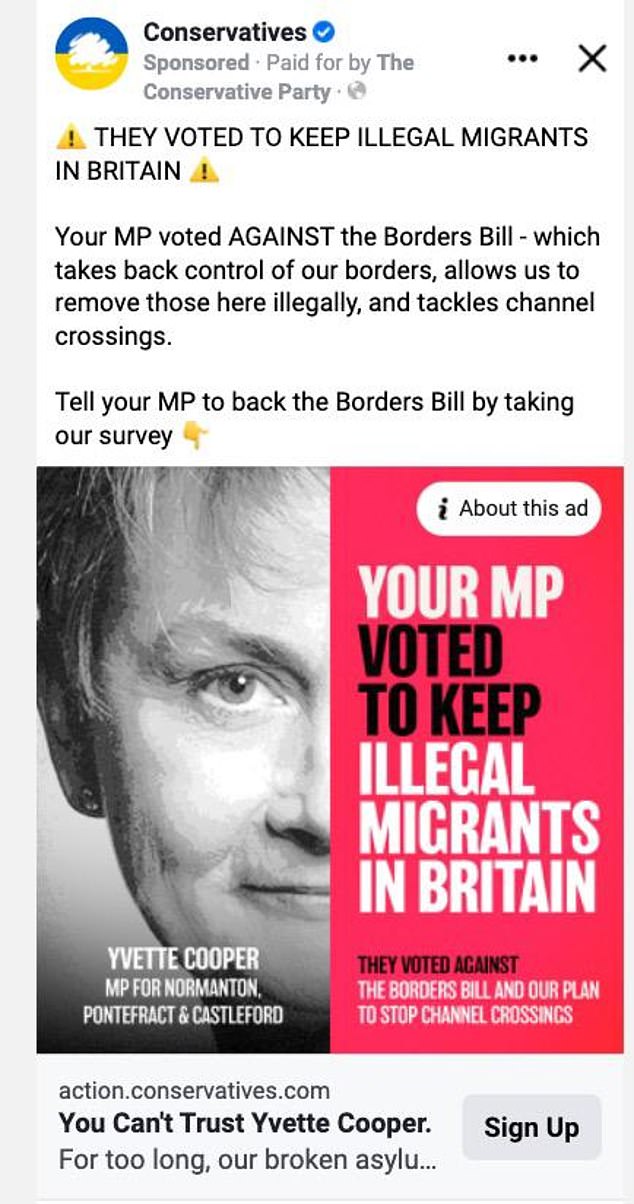 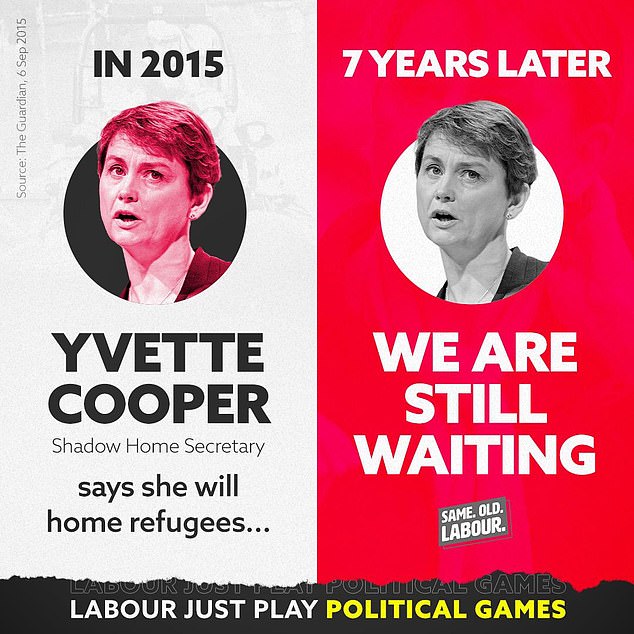 In response to the adverts, a Labour source attacked Home Secretary Priti Patel’s record on illegal migration across the Channel

Last night, Labour voted against the Government on its Nationality and Borders Bill, which would allow the UK to send asylum seekers to a ‘safe third country’.

Shadow Home Office minister Stephen Kinnock said Labour does not support the Rwanda plan and described the bill as ‘profoundly inadequate and mean-spirited’.

In their adverts, the Tories have targeted senior Labour frontbenchers such as shadow home secretary Yvette Cooper and shadow business secretary Jonathan Reynolds.

One read: ‘Your MP voted AGAINST the Borders Bill – which takes back control of our borders, allows us to remove those here illegally, and tackles Channel crossings.’

A Labour source branded the adverts as ‘yet another lie from the Tories’ and attacked Ms Patel’s record on illegal migration across the Channel.

They added: ‘Labour wants stronger action against trafficking gangs but under Priti Patel small boat crossings have soared and this unworkable bill makes it worse.

‘No one believes a word she or Boris Johnson say.’