Every actor has their secrets. However, some of those happen to be hidden talents that their fans would never expect to see from them. Timothée Chalamet is one of the most talked-about actors of this generation. He appeared on Jimmy Fallon’s The Tonight Show with a special gift. Chalamet showed off his “hidden talent” which shocked the host and the studio audience.

Chalamet’s most obvious talent is the one that he showcases in front of the whole world – acting. He originally got his start in 2014’s Men, Women & Children, but his career would only grow from there. Getting a role in Christopher Nolan’s Interstellar is also particularly impressive, even though he had a rather small role as Matthew McConaughey’s son.

However, Chalamet really impressed the world with the talent displayed in his Oscar-nominated performance in Call Me by Your Name. His roles in Lady Bird, Little Women, Don’t Look Up, and Dune only solidified his star status, as he continues to attract major roles. 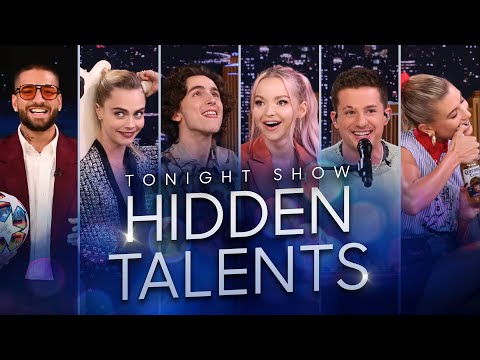 Fallon’s The Tonight Show uploaded a compilation of different celebrities showcasing their “hidden talent” on YouTube. The video includes a look at stars, including Cara Delevinge, Maggie Gyllenhaal, and Charlie Puth. However, Chalamet showed off a particularly impressive hidden talent that both the host and the studio audience loved.

“It said on your resumé, your acting resumé, you put things on there besides acting, skills that you could do,” Fallon said. “One of them, I think, was dance. Maybe one of them was chess, I want to say?”

Chalamet responded: “It was random. My mom used to fill out my resumé, so they have special skills when you go in for auditions. Like, no casting director is gonna be like, ‘This kid plays chess! Let’s put him in a movie.’ (laughs) But, it was a lot. It was like chess, bike riding, swimming, like normal s***.”

The actor repeatedly apologized for swearing on television. Fallon joked that Chalamet cost NBC a lot of money in fees for the profanity.

Fallon continued: “One of the things we saw on there was juggling.”

“Juggling, yeah. I used to be able to know – maybe I know,” as Fallon pulled out juggling balls from behind his desk. “But you have juggling balls right here. (laughs)”

The actor will show that he can also sing in ‘Wonka’

Chalamet will continue to surprise his audience with another talent in the upcoming movie Wonka. He will play Willy Wonka in a prequel film that will follow the eccentric chocolatier in his earlier days. Keegan-Michael Key, Sally Hawkins, Rowan Atkinson, Olivia Colman, and Jim Carter star in supporting roles.

Chalamet confirmed that he will bring his talent to Wonka by recording his own songs for the movie. There’s a lot that this actor can do that continues to surprise his fans. Audiences will have to wait to see what else he’s capable of.