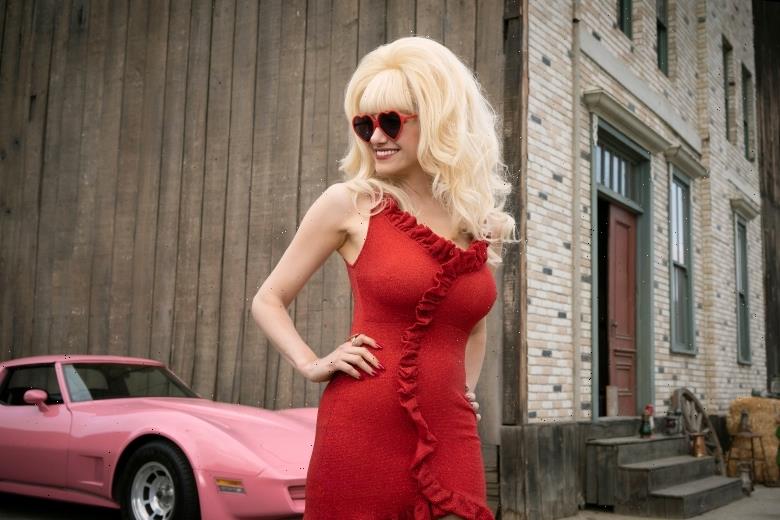 Fame is her destiny and Angelyne is her name: Meet the blonde bombshell behind the billboards in the new Peacock Original series, “Angelyne.” Watch the trailer for the series below.

Per an official synopsis, “Angelyne” is about L.A.’s original billboard icon from the ’80s, who infiltrated pop culture and rose to fame when a series of billboards began to appear around L.A. featuring her signature curvy figure. The Peacock Original series also addresses fame, identity, survival, billboards, Corvettes, lingerie, men, women, women teasing men, men obsessed with women, West Hollywood, crystals, UFOs, and most importantly of all, the self-proclaimed Rorschach test in pink, glow-in-the-dark queen of the universe Angelyne.

“I love Angelyne. She’s as if Marilyn Monroe got into an easy bake oven with a ’80s punk Barbie Doll, and a dose of new-age spirituality,” Rossum shared in a press statement. “She’s a trailblazer, a hustler, a visionary, the original influencer, a living-breathing piece of art.”

Showrunner and executive producer Allison Miller added, ” ‘Angelyne’ is an homage to the real Angelyne, who became a cultural icon in Los Angeles. This isn’t the true story of Angelyne. It’s not a straightforward biopic. It’s a story inspired by everything Angelyne represents and so it’s a magical story, a hopeful story, a story about becoming the person you were meant to be and believing in your own inner strength to manifest your dreams. It’s a story about Los Angeles and everything the city means to people who move here and to people who dream about moving here.”

“Angelyne” premieres May 19 on Peacock.