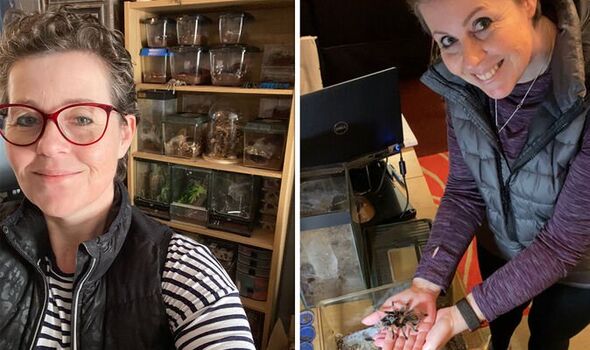 Claire Jones, 48, followed yo-yo dieting patterns for years, before finally deciding to lose weight in 2009. The former NHS nurse lost an impressive five stone and later managed to maintain her ideal weight through diet and exercise. However, in 2016, the 48-year-old suffered an injury, which meant she couldn’t exercise for several months. “The opportunity to start keeping tarantulas presented itself completely randomly at around the same time, and so my time and attention went into developing the hobby in place of my running and weight training, and it was an extremely effective distraction,” Claire said.

In this way, keeping tarantulas helped Claire keep off the weight she had worked so hard to lose in the first place.

She continued: “If it hadn’t been for that I am sure I would have fallen back into old habits such as comfort eating, especially as exercise had become such an important way of me maintaining my mental and physical health, and I enjoyed it so not being able to do it made me feel very sad.

“However, when I put my mind to something I tend to go all in. So once my interest was piqued, I ended up spending lots of time learning about them [tarantulas], watching them, feeding them, shopping for new ones and even got a microscope so I could examine their shed skins to find out if they were male or female.”

But how did Claire, who said she used to be so scared of spiders, get into tarantula keeping in the first place?

Claire explained: “Firstly, I have to say it’s not something I ever thought I’d do. It was a series of events that happened at the right time, it wasn’t a conscious, deliberate thing.

“I’d always been frightened of spiders for as long as I could remember – I remember having to get rescued from them as a child.

“I couldn’t stay in my bedroom if I knew there was a spider in there for example, and would scream if I saw one.

“Then, having to rescue some children I was babysitting from a huge spider in their bedroom, and then having children of my own and dealing with spiders in their bedrooms, I had to confront my fears.”

DON’T MISS:
Meghan and Harry missed out on ‘ideal’ opportunity with Queen and Lili [COMMENT]
Prince Harry once left ‘shaking’ while delivering ‘worst’ ever speech [VIDEO]
Harry and Meghan hoping ‘Charles will be open’ to review arrangements [INSIDER]

Therefore, when Claire attended HorrorCon UK in Sheffield in 2016, and met a woman who owned a tarantula, she knew it was her chance to overcome her fear.

“The lady who ran the stall explained to me that she would use the tarantula to help people to overcome their fear,” Claire recalled.

“And so, before I knew it, I had a tarantula on my hand. And I was struck by how it was so gentle and fluffy – not words I would previously have associated with it.

“And I was fascinated at how I was able to hold this tarantula on my hand.”

Claire later visited a friend of a friend, Mike, who owned 100 tarantulas and had just nought even more – baby salmon-pink bird-eater tarantulas.

Before she knew it, Claire was taking one of the tarantulas “home in a small plastic tub in my handbag, with instructions from Mike on how to look after it, knowing he’d take it back if I didn’t get on with it”.

“And then I was thinking ‘how on earth am I going to tell my husband about this?’,” Claire said.

Since her first tarantula, Claire has owned 53 of the creatures. She now has 32.

The 48-year-old explained: “I don’t intend at this point in time in getting any more. But I obviously want to nurture the ones that I’ve got as they get bigger and grow into adulthood, as well as the adults I already have.

“The females could live for up to 30 years. So obviously I need to consider having enough space for all of them for the foreseeable future.”

She said: “It’s still very much there. But I am in control of it a lot more. So, for example, I get quite nervous at times when I need to perhaps move them into a new enclosure when they’ve got bigger and need a new home, or at feeding time when I have to take the lid off the enclosure.

“I have a healthy respect for them and the fact that they could bite me, but actually I’ve realised that what I’m more scared of is if they make any sudden movements – then I will jump and might hurt them by accident.”

However, Claire added: “I am much less scared than I used to be and I think that is simply down to a better understanding of spiders in general and also exposure to them more and more over time.

“I am okay with spiders in the house now and I have actually walked into a spider in its web across the path in the garden – face-to-face – and not freaked out.

“Now that is progress.”