It’s rarely a straight road, the one that leads to celebrity status, but Jimmy Rees’ fame highway has surely been bendier than most. There are probably still Australians of a certain age who know Rees best as Jimmy Giggle, the pyjama-clad pal of a puppet owl in that smash hit of the pre-school set, Giggle and Hoot. On the other hand, nowadays there would be many among his new battalion of more mature fans who know nothing of his toddler-pleasing antics. 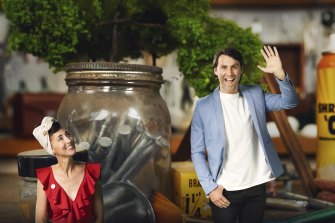 For these days Rees is what the youth have probably long ago stopped referring to as a “viral phenomenon”, taking the internet by storm with his homemade one-man comedy sketches taking aim at myriad elements of Australian life. How does such a transformation happen? The answer is that the new Jimmy Rees is one of the happy silver linings of the COVID pandemic – it was videos wherein he poked fun at the government’s response to the virus that caused his new career path to go supernova.

“It was kind of born out of a bit of necessity,” he muses.

“Giggle and Hoot ended in 2019, I had a bunch of gigs booked for Giggle and Hoot, we had a little tour that was planned, then 2020 rolled around and the single live event I had planned that was going to be my income for that year disappeared.

“And we had to deal with being in lockdown. I was confused about to what to do, I was bored basically, and I was like, this is my chance to make some silly videos for the internet, this is something I’ve wanted to do. I wouldn’t have been able to do the stuff I do now when I was Jimmy Giggle, so I thought this is my time.

“I started making some silly videos, I think the first ones I made were about parenting, things my five-year-old does around the house. And it just blew me away how far it reached: Facebook would send me stats and I’d never had more than 20 or 30,000 on any of the posts I’d done … and this one was a million.

“I said to my wife, I’m gonna make another one tomorrow. So I did another one the next day, and it did the same thing. It was gaining so much more reach than I could ever have imagined. I guess the rest is history, it just kept going and going and going. And I took the layers of my ABC hat off more and more.”

And yet his soaring fame online has led him to don that hat again: having moved from kids’ television to grown-ups’ internet, he’s back on Aunty, now as Jimmy Rees rather than Giggle, presenting Tiny Oz, a documentary series about the curious community of passionate artists who dedicate their lives to recreating important moments in Australian history in miniature.

One might say that after cutting his teeth entertaining tiny people, he moved on to making tiny bits of online comedy, and now he’s entered the final stage: peering intently at tiny models.

Whence comes his fascination with the minute? “I think that I’ve always been interested in art and things that are different, and mostly things that are funny,” Rees says.

“There’s something about tiny miniature things that create a bit of wonder. Even my kids’ matchbox cars, when they do a tiny little version of those, the size of your thumb, you’re like ‘Aw that’s cute isn’t it’. Everyone’s always got this wonder, this ‘how is it so small?’ thing.”

But what is it about Rees – comedian, influencer, former owl-associate – that made the ABC sure he was the man they wanted at the helm of their tiny world? “I’m not a miniaturist,” he makes clear from the outset.

“I think they wanted someone to go along on that journey, learning about it all and having fun. Sometimes the guys in the series get quite serious because they’re building this amazing model with so much intricate detail, and you could get bogged down in, that doesn’t look right, this doesn’t look right. I can be the person who can step back and be like, (voice of childlike glee) ‘Hey guys! We’re making tiny things!’”

But in that position – the funnyman looking on while passionate artistes work painstakingly on their masterpieces – is there a risk that he might offend the creators with his lighthearted approach to their craft?

“Yeah, a little bit,” he concedes. “But we’re making this for the joy and the wonder that people see in this tiny miniature thing. I think it’s good to look at it with fresh eyes. But there is some part of me that kept thinking … if I just stood on this, I could wreck the whole thing. I could drop one brick and the whole thing’s gone, and it took 400 hours.”

Jokes and destructive urges aside, watching the tiny worlds come into existence was an eye-opening experience for the host.

“The main thing I learned is that making miniatures takes forever. And all these techniques that they’ve got: they have to make this lake in one episode, and they get this epoxy resin, and we cut out the little thing and pour it in there, but it doesn’t really set in the way, so we’ve got to manage it while it’s setting, for hours and hours, slowly mixing it so the bubbles come out.”

Then there’s the historical education the show provides, with models such as the miniature recreation of the day Sydney’s zoo moved from the city centre to Taronga – giraffes and elephants marching down Macquarie Street to the barge to take them to their new home. “The whole series is an explanation of these moments in history that are incredible,” says Rees. “I learned a lot.”

But in learning, and in presenting his learning to a new audience, in a way he’s doing the same thing he did as Jimmy Giggle: teaching. Looks like that bendy road really did come full circle.

Tiny Oz premieres on the ABC and ABC iView on Tuesday April 19.