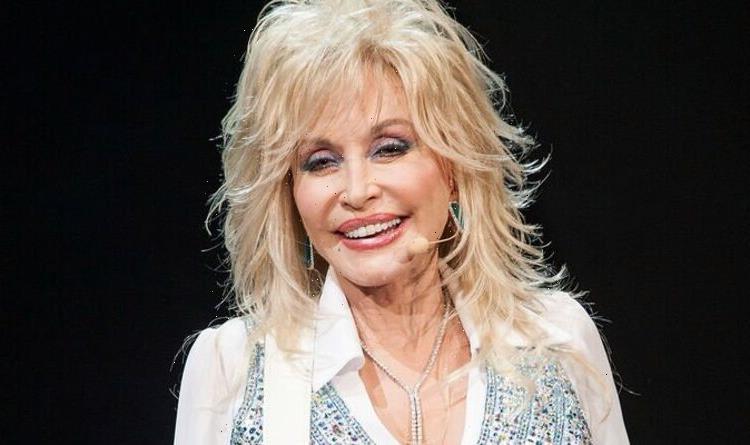 Dolly was standing outside the Wishy Washy laundermatte in Nashville in 1964 when a young man drove by and “hollered” at her. Carl Dean immediately asked her out. She was 18 and he was 21. They courted and then married on May 6, 1966, with just her mother in attendance. That intense intimate privacy has been the bedrock of their relationship, of which Dolly said: “We’re really very proud of our marriage. It’s the first for both of us. And the last.”

Carl has never been part of Dolly’s celebrity life and career. He often tells people he is the gardener if they come to the house and refuses to let his wife use his image, even at her famous theme park, Dollywood, which is based around her life.

Although Dolly respects his wishes, she did reveal that she wrote her iconic song Jolene after a waitress flirted with her husband. However, her most famous balld, I Wil Always Love YOu, was not written for Carl/

The classic track was inspired by the ending of Dolly’s professional relationship with country star Porter Wagoner. The two appeared together on his hugely successful TV show for five years but she decided it was time to forge her own path in 1973. The song is an expression of her love and respect for him, and she wishes him joy as she leaves.

Dolly’s relationship with Carl has always been much more private. However, she has revealed small personal details that give a beautiful glimpse into their life together.

Earlier this year, for Valentine’s Day, the country star tweeted a very rare shot of them together, showing Carl kissing her. Dolly also admitted she dresses up for him at home as much as she does in public.

She said: “I like to dress up for Carl. Every day, I put on some makeup and fix my hair because I think, ‘Well, the whole world, I’m out here and everybody else sees me all dressed up, and I’m not going to just kind of go home and just flop on him. Nobody wants to make out with a slouch!”

She also, famously, recreated her Playboy magazine cover for him and shared the moment with the world.

Dolly dressed up in her Playboy Bunny outfit for Carl’s 79th birthday in 2021 and appeared in front of him in their kitchen.

She said: “I thought, ‘Well, I’ll just go surprise my husband and just cook breakfast for him in my bunny suit. He got a kick out of it, and evidently a few other people did, too!”

Only teh back of Carl’s head is visible and he has always avoided being photographed, but Dolly did  put him on the cover of her album, My Blue Ridge Mountain Boy.

The country star is worth over $600million and Carl ran his own successful asphalt road-paving business in Nashville before he retired. Dolly has also admitted that people may think they spoil each other with fancy gifts, but the reality is very different and much sweeter.

Dolly said: “Carl often buys me things like aprons or oven mitts. People laugh when they find out.

“They ask, ‘What’s your husband getting you?’ thinking it will be a diamond ring! But he just buys me what he knows I really want. He also writes me sweet poems, and I write him songs.”

Dolly also made a rare statement about Carl’s illness just before CHristmas in 2020, saying: “My husband, Carl, has not been in great health for a while, so I’ve been spending a lot of time at home…”

Insiders have claimed that Carl had beenbattling high blood pressure and a weak heart before a rumoured Alzheimer’s diagnosis.