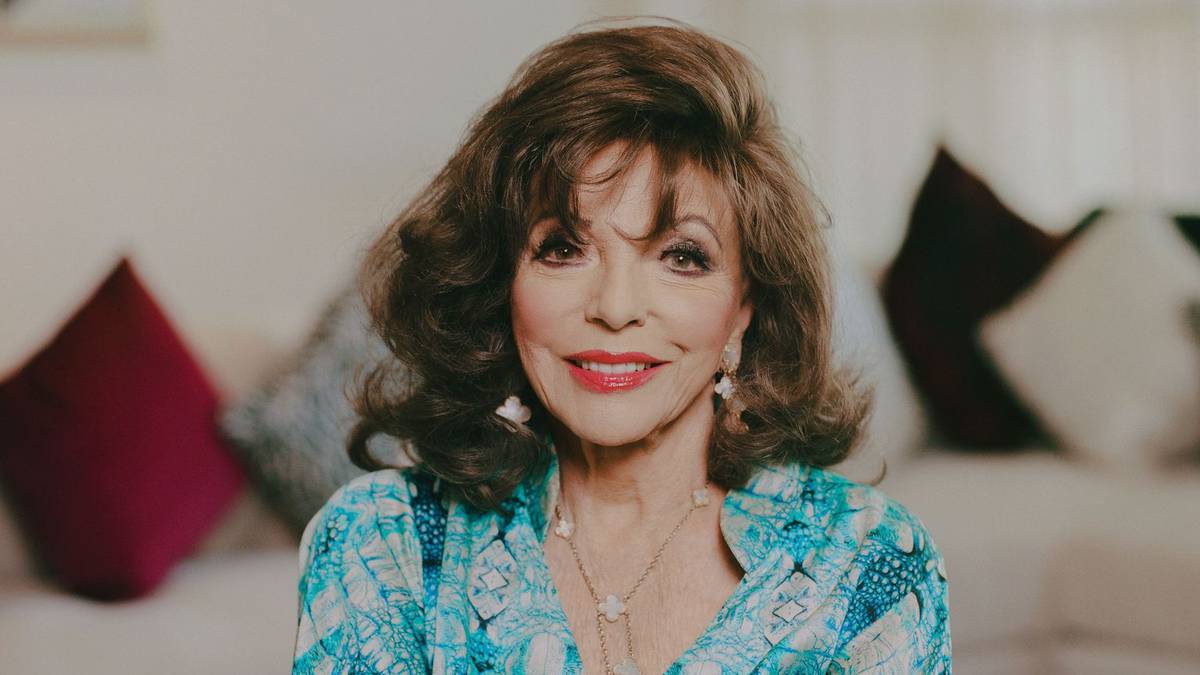 The actress (don’t call her an actor, please) reflects on her seven-decade career, predatory Hollywood and why sometimes it’s better not to relive the past. By Alexis Soloski.

“I’m not a bad girl,” said Joan Collins, draped across a white sofa. “I was a very innocent girl. But I had dark hair and green eyes and I suppose they said that I smouldered.”

This was on a recent, sun-strafed California afternoon in her apartment, part of a luxury building on the edge of Beverly Hills. Collins, an actress whose career has ranged from the sublime (“Land of the Pharaohs”) to the ridiculous (“Empire of the Ants”) to the sublimely ridiculous (“Dynasty”), wore white slacks, an aquamarine blouse and white espadrilles. A pink diamond the size of a strawberry weighted one finger; her hair had been teased toward the heavens. How many synthetic zebras had died for those nearby pillows? That pouf? So many.

As for the smouldering, well, it was 29C outside. Wouldn’t anyone?

Collins, 88, had invited me over — plying me with coffee, water, an assortment of deluxe cookies — to talk about “This Is Joan Collins,” a documentary that ran on the BBC on New Year’s Day and arrived this week on BritBox.

What did it mean to look back on her life for the project? “I’m not very analytical,” she said languorously. “I just do a thing. I just get on with it.”

For the film, Collins gave the producers access to her archives and home movies. She otherwise discounts her contribution. “I said, ‘Just don’t put in too many of the nude bits,'” she said. But she narrates the film, with much of what she says adapted from her memoirs. “Here I am,” she purrs in the opening moments, “after seven decades in the business, to tell you a thing or two about how to survive the perils of the profession and what it really feels like to get what you want.”

Collins was born in 1933, the eldest child of a dance teacher and a talent agent. As a child, she lived through the Blitz in London — the bombings, evacuations, dislocations — which has made her impatient with what she perceives as whining.

“I have to say, every time I read about an actor today, they’ve all been abused or had terrible childhoods,” she said. “I had a great childhood, other than the war.”

At 17, she signed with a British film studio. She doesn’t believe she was glamorous. Not then. But the press disagreed and she recalled some of the nicknames she was given: Britain’s bad girl, coffee bar vixen, the torrid baggage. She was typecast accordingly.

At 21, Fox made her a contract player and she came to California. She had already separated from her first husband, Maxwell Reed, an actor who had raped her on their first date. As she wrote in her first memoir, “Past Imperfect: An Autobiography,” and reiterates in the documentary, most of the men she encountered in the business were predatory.

She remembered being chased around a house in Palm Springs, a pass made in a car. Then she stopped remembering. “It’s all nasty memories that I don’t wish to relive,” she said. “It happened. It happened to girls all the time.”

How did she survive it? She shrugged and got on with it. “A lot of the time, I would just laugh in their faces,” she said.

In these early years, she developed a reputation for promiscuity, which wasn’t entirely deserved, even as it became part of her fame. (A 2015 auction of her belongings included not only love letters, but also her headboard.) “I did have a lot of boyfriends, but sequentially,” she said. “And I would sleep with some of them. Not at the same time. I think that I was ahead of my time, because women didn’t do that.”

At 30, she married the actor and songwriter Anthony Newley and had two children. When her relationship with Newley ended, she married the music executive Ron Kass and had a daughter. Later, there was a fourth marriage, to the Swedish singer Peter Holm. (“The only one I didn’t understand was the Swede,” she said. “That was such a total mistake.”) She now lives with her fifth husband, the theatrical producer Percy Gibson. He was the one who brought the water and took away the cookies.

She left the business after she married Newley and she struggled to return to it. The documentary includes clips of a particular low point, the real estate investors vs. mutant insects B movie “The Empire of the Ants” (1977). How did she handle schlocky material? “You do the best you can,” she said. “You learn your lines, you hit your marks and you get on with it.”

Only rarely could she escape typecasting, but she shrugged that off too, recounting a conversation she had with the actor John Gielgud, in which he told her that because she could never escape her physicality, she could never play an ugly woman. “That was true for a certain amount of years,” she said.

She believes that good looks can be a deterrent when it comes to quality roles: “Which the young actresses of today realise, which is why most of them try to look as ordinary as possible.”

In the late 1970s, she made a comeback with two soft-core films — “The Stud” and “The Bitch” — adapted from novels by her sister Jackie Collins. This exposure led to her most famous role, Alexis in Aaron Spelling’s nighttime soap “Dynasty.”

Despite well-publicized on-set struggles, and the producers’ petty reaction to her demands for equal pay, she remains proud of “Dynasty.” Much of the memorabilia hung throughout her apartment dates from that era. “It was glamorous,” she said. “It was about very, very rich people, most of them good looking.” She compared it to the current hit “Succession,” though she remarked that on “Succession” they wear shabbier clothes.

“Dynasty” ended more than three decades ago. Collins hasn’t had a great role since. She thinks she knows why. “Casting directors say, ‘Oh, no, we can’t use Joan Collins in this vixen, bitch part, because it’s too obvious.’ And ‘Oh, no, we can’t have her in this other role. She can only do vixen bitches.'”

Still, she has gone on, describing her glamorous life in columns for the British weekly magazine The Spectator, where Boris Johnson was once her boss. “Jolly, very funny, great buffoon,” was how she described him, acknowledging that buffoon was perhaps the wrong word.

“He never cut a word of my diaries,” she added.

Collins hasn’t changed much. (Even her look has altered very little, though she claims to have tried Botox only once: “I screamed and left the surgery.”) And she’s not sure if the entertainment industry has either. “I’m not having men making passes at me, so I don’t know,” she said. “But I think probably.” Still, in the wake of the #MeToo movement, she seemed worried mostly about the men.

“Sadly, I think that now young men are suffering from being labeled toxically masculine,” she said, “because of this rise of anti-maleness.”

And yet, she identifies as a feminist. “I believe that women are equal to men in every single way,” she said. “Except physical strength. People say you didn’t burn your bra, you wear lipstick. So what? I’m very proud of being a woman.” She added that she hates being called an actor, preferring actress.

This was about an hour into the conversation, just before I was ushered out of the apartment just as warmly as I had been welcomed in — a photographer had arrived, Collins had smoldering to do. But first I had to ask her about that opening line of the documentary: What does it really feel like to get what you want?

She wakes up every morning and thanks “God or whoever it is,” she said. “I mean, I’m very lucky.”

Then she added, with something that may have been a wink, “But you make your own luck sometimes, right?”
New York Times