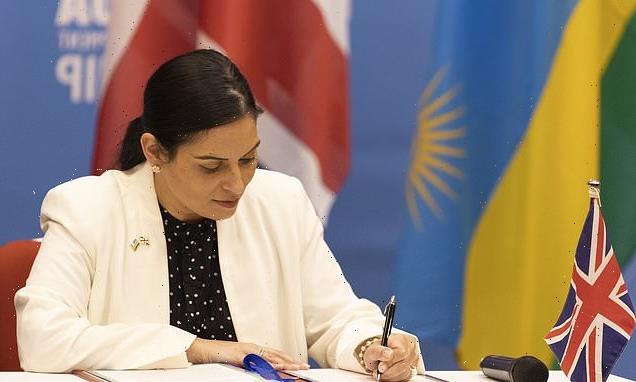 Boris Johnson’s new immigration plan involves sending ‘tens of thousands’ of asylum seekers to Rwanda. But how will it work?

Q. Does the new proposal apply only to migrants who arrive on small boats?

A. No. It will be enforced on all asylum seekers who arrive by ‘irregular routes’, including stowaways in the back of lorries, for example.

Q. What happens to a migrant boat in the Channel under the plan?

A. The Armed Forces took command of the Channel operation yesterday and will be responsible for overseeing the rescue of migrant boats. A wide range of military and civilian assets will be used on the sea and in the air, with up to 300 personnel involved on busy days. Migrants will be brought to Dover, where they will be received by UK Border Force staff backed up by military personnel.

Q. Will the military push back any boats to France?

A. No. Mr Johnson indicated yesterday that tactic is all but dead. He said ‘relying solely on this course of action is simply not practical’, although it could be used in ‘extremely limited circumstances’. Ministers have been unable to secure agreement with the French to accept migrants back. 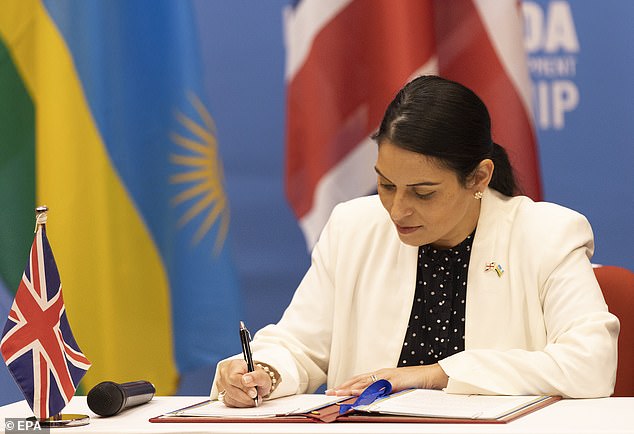 Home Secretary Priti Patel, the architect of the Rwanda deal, signs the partnership

Q. What will happen once asylum seekers are ashore in Britain?

A. They will undergo initial processing at a new centre at a former RAF base in Manston, Kent. They will be screened for ‘vulnerability and safeguarding measures’ that could prevent them being suitable for removal to Rwanda, and then transferred to temporary accommodation.

Q. How will asylum seekers be assessed for removal to Rwanda?

Q. Are any types of migrant not eligible for the Rwanda scheme?

A. Lone children are exempt, and family groups will not be split up.

Q. What happens if someone is deemed eligible for removal to Rwanda?

A. The Government will provide Rwanda with biographical details of each person they want to transfer, as well as any special needs, health issues, security issues and biometric data, if available. Rwanda can refuse individuals for several reasons, such as if they have a criminal record.

Q. What happens to the migrants Rwanda agrees to accept?

A. They will be given five days’ notice that they will be removed to Rwanda. As soon as they are told, they will be taken into immigration detention, over concerns they would abscond. They will then have access to legal advice. The outcome of each case is then likely to be in the hands of the courts.

Q. Won’t asylum seekers just abscond before a decision has been made?

A. Possibly. But Home Office officials refused to speculate on the possibility of more people absconding. 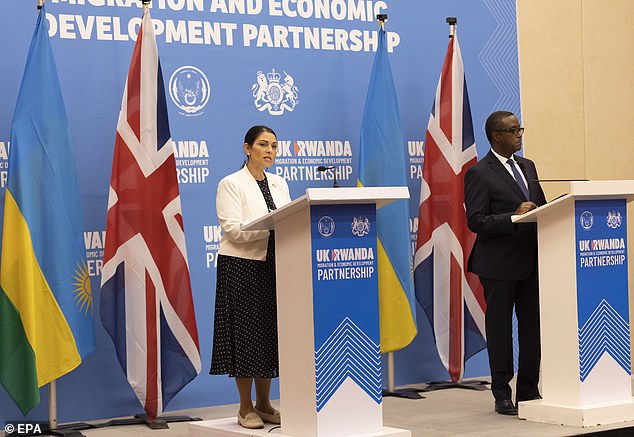 Q. How will the asylum seekers get to Rwanda?

A. The Government will charter planes. The process is costly and controversial. A similar policy to return foreign criminals to Jamaica costs about £14,000 per person.

Q. What happens once they arrive in Africa?

A. Rwanda has arranged accommodation – including a former tourist hostel on the outskirts of the capital Kigali. The migrants will then be able to apply for asylum, under the local system. The UK will cover Rwanda’s costs and fund an extensive support package. Once a decision is made, successful applicants will be given refugee status and be able to ‘build a prosperous new life’ in the country. If they are refused asylum, they could be offered another immigration status. As a last resort, they could be returned to their country of origin or another safe country.

A. Officials say they have taken extensive legal advice, which said the five-year deal with Rwanda complies with international law. However, they are poised for a surge of legal challenges.

Q. What could the legal challenges involve?

A. Human rights and refugee groups could bring a case for judicial review of the entire policy, or another type of litigation, designed to block it being implemented. Once a decision has been made in court there would most likely be further appeals.

Q. How much will the Rwanda plan cost?

A. Home Secretary Priti Patel and her officials have been extremely coy. They admit a full financial analysis has been conducted – but refuse to reveal its contents. The asylum system currently costs £1.5 billion a year, and will rise as levels of asylum claims increase.

Q. Is the Government looking at sending asylum seekers to other countries?

A. Yes. Officials have indicated negotiations are under way.