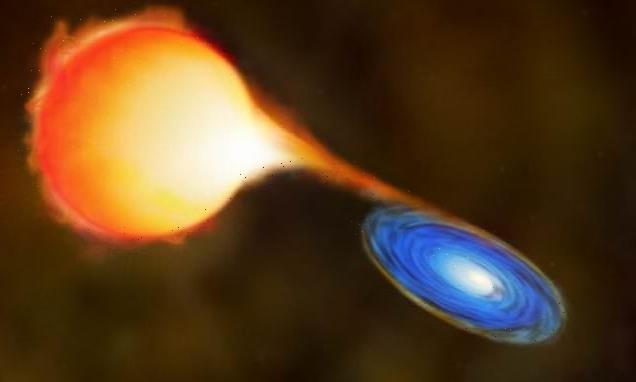 Astronomical weight-loss plan: Scientists discover a ‘slimmer’ type of red giant that may be having its mass sucked away by a neighbouring star

Astronomers have discovered a ‘slimmer’ type of red giant that they believe is having its mass sucked away by a neighbouring star.

Experts had predicted the existence of such objects but this is the first evidence of the phenomena.

The University of Sydney researchers found not just one but a smattering of 40 slimmer red giants hidden amongst ‘a sea of normal ones’.

They said the discovery is an important step in understanding the life of stars in the Milky Way. 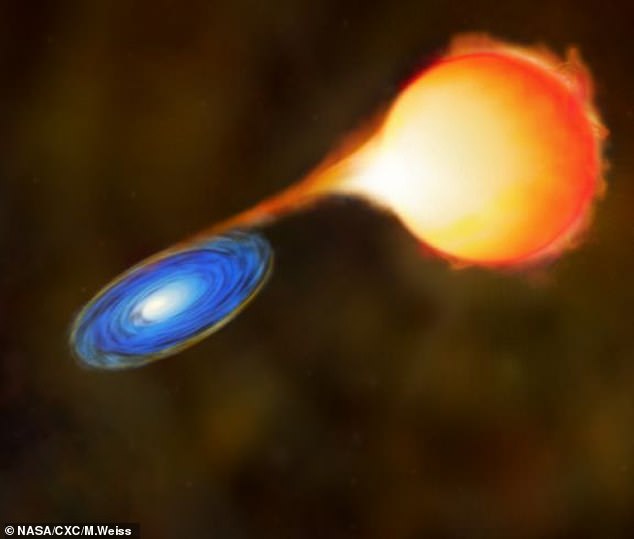 Astronomers have discovered a ‘slimmer’ type of red giant that they believe is having its mass sucked away by a neighbouring star. In the binary stellar system named Mira, a red giant star transfers mass to a white dwarf (pictured in an artist’s impression)

WHAT IS A RED GIANT?

A red giant star is a star in the last phase of its life.

This increases the luminosity of the star enormously ( up to 1000 times the sun) and it expands.

After a few more millions of years, the star evolves into a white dwarf-planetary nebula system and then its all over for the star.

There are millions of cool and luminous ‘red giants’ – which is what our sun will become in four billion years time – found in our galaxy.

But the slimmer ones have undergone dramatic weight loss, which scientists think is possibly due to the presence a greedy neighbour.

Most stars in the sky are in binary systems — two stars that are gravitationally bound to each other.

When the stars in close binaries expand, as stars do as they age, some material can reach the gravitational sphere of their companion and be sucked away.

‘In the case of relatively tiny red giants, we think a companion could possibly be present,’ Mr Li said.

From 2009 to 2013, the telescope continuously recorded brightness variations on tens of thousands of red giants.

Using this incredibly accurate and large dataset, the team conducted a thorough census of this stellar population, providing the groundwork for spotting any outliers.

The very low-mass stars weigh only 0.5 to 0.7 solar mass – around half the weight of our sun.

If the very low-mass stars had not suddenly lost weight, their masses would indicate they were older than the age of the Universe, which is impossible.

‘So, when we first obtained the masses of these stars, we thought there was something wrong with the measurement,’ Mr Li said. ‘But it turns out there wasn’t.’

The underluminous stars, on the other hand, have normal masses, ranging from 0.8 to 2.0 solar mass.

‘However, they are much less “giant” than we expect,’ said study co-author Dr Simon Murphy, of the University of Southern Queensland.

Only seven such underluminous stars were found, and the authors suspect many more are hiding in the sample.

‘The problem is that most of them are very good at blending in. It was a real treasure hunt to find them,’ Dr Murphy said.

These unusual data points could not be explained by simple expectations from stellar evolution. 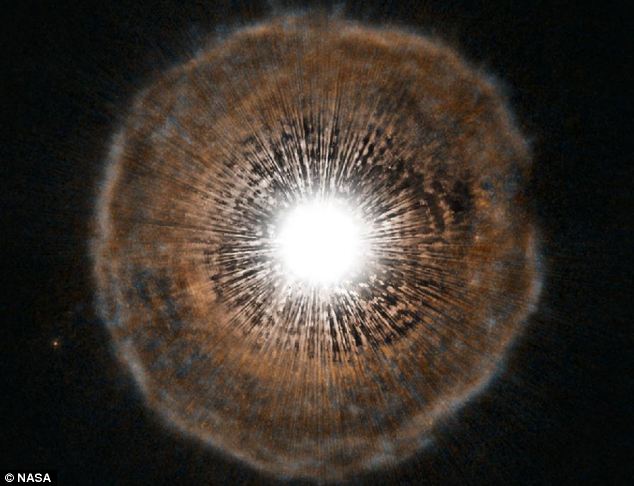 Red giants, such as this one taken using the Hubble telescope, form when a star converts hydrogen to helium to produce light and other radiation. Over time, the heavier helium sinks to the centre of the star, creating a shell of hydrogen around the helium core

This led the researchers to conclude that another mechanism must be at work, forcing these stars to undergo dramatic weight loss: theft of mass by nearby stars.

The researchers relied on asteroseismology – the study of stellar vibrations – to determine the properties of the red giants.

Traditional methods to study a star are limited to their surface properties, for example, surface temperature and luminosity.

By contrast, asteroseismology, which uses sound waves, probes beneath this.

‘The waves penetrate the stellar interior, giving us rich information on another dimension,’ Mr Li said.

The researchers could precisely determine stars’ evolutionary stages, masses, and sizes with this method.

And when they looked at the distributions of these properties, something unusual was immediately noticed: some stars have tiny masses or sizes.

‘It is highly unusual for a PhD student to make such an important discovery’, said Professor Tim Bedding, Mr Li’s academic supervisor.

‘By sifting carefully through data from NASA’s Kepler space telescope, Yaguang spotted something that everyone else had missed.’

The study has been published in the journal Nature Astronomy.