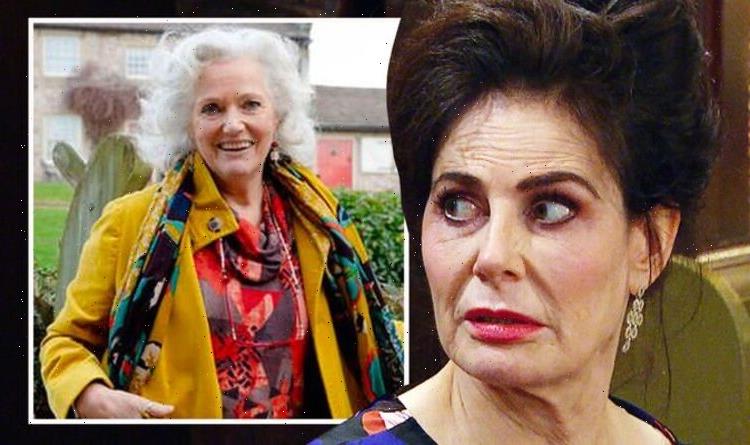 Faith (played by Sally Dexter) made her grand return to Emmerdale just over a year ago and she has been reestablishing her relationships with her son, Cain Dingle (Jeff Hordley), and daughter, Chas Dingle (Lucy Pargeter). The matriarch of the iconic ITV soap family has also been helping her grandson, Nate Robinson (Jurell Carter), with his young daughter Frankie, offering some motherly advice in the absence of his own mother. However, away from the drama on-screen, the beloved character might have been having relations with another villager, someone who has been on her radar for quite some time. Having finally found a friend in Mary (Louise Jameson), she could finally believe now is the time to share her happiness.

In upcoming scenes of the weeknight serial drama, Faith will find herself becoming a confidant to Mary, who has become deeply concerned about her daughter, Rhona Goskirk (Zoe Henry).

With her partner, Marlon Dingle (Mark Charnock), still recovering from his stroke, Rhona has been doing the job of two parents as well as still making time to go and visit her other half.

Mary will tell Faith all about her worries, which doesn’t go down too well with her daughter who ends up chucking her out of the house.

Although her relationship with her child will become increasingly strained, the newcomer will be sharing more scenes with Faith as their friendship continues to blossom.

The actress who plays Mary, Louise, has spoken out about the characters’ relationship and teased a few secrets could come to light.

Addressing why she thinks her alter-ego gets on so well with Faith, Louise said: “Faith is also a woman of a certain age who understands the problems of a dysfunctional family and feelings of loneliness.

“So there probably isn’t anything they wouldn’t share, especially if there was a glass of two of Prosecco involved,” she added.

This is a big hint either one of the two women could decide to share with each other something no one else knows about.

Faith is known for stating a few home truths once she has had a drink and she could confess to Mary she has been having an affair with Bear Wolf (Joshua Richards).

In the past, the two characters have had a spark but Faith always felt her heart belonged to stalwart, Eric Pollard (Chris Chittell).

As this boat seems to have sailed and with Faith and Bear spending a lot more time together following the Woolpack explosion, they could have given in to temptation and started a steamy affair.

Faith could tell Mary she has never felt so youthful and her new lover knows how to make her happy, but she still wants it to be a secret.

Once it is out there for everyone to know about, judgement would be cast as he is the father of Faith’s son-in-law, Paddy Kirk (Dominic Brunt).

When more people get involved in a relationship, things become tricker and the fun they are having could be gone as quick as it came.

But will Mary agree to keep the secret or will she share the gossip with the rest of the village, possibly jeopardising her new friendship?

Louise continued to explain why Mary and Faith’s friendship works as she added: “I think Mary functions off expecting people to like her.

“Appreciate might not be the right word but she definitely loves having more friends around than she has been used to.”

Asked if she would like to work with the actress who plays Faith, Sally, more in the future, the actress’s answer was certain.

She replied: “I love, love, love working with Sally.

“She’s such an amazing character on and off-screen. Yes, I would very much like more scenes with her, who wouldn’t?”

It seems this pair could get up to a whole lot of mischief and things would become more difficult if Mary were to have a playful flirt with Bear.

The two women could end up warring over who Bear likes the most, with Mary providing him with a chance to have a romance which isn’t a secret.

This could be the point Faith is forced to admit she is in love with Bear publicly in front of her friends and family.

Mary might have been playing a game plan all along, knowing if she flirted with Bear, this would make Faith sit up and think about her feelings.

As well as exposing the secret, this would also allow Mary a chance to interact with some more characters in the village.

Asked whether she is enjoying her time on the show, Louise said: “I absolutely bloody love the Dales and I am thrilled to be part of such a brilliant storyline.

“I’ve landed in a fabulous family of actors, both on and off-screen,” she explained before adding whether she would like to stick around for longer.

The soap star remarked: “You’ll have to ask the producers, but if it was my call, I’d say, ‘Yes please’.”

If Mary does stay around for the foreseeable, could she be the person to help Mary and Rhona rebuild their relationship?

This would certainly mean Mary could stay for longer, rather than feeling she was being pushed out by her own family.