A former compliance manager at The Star casino says he would have altered advice to the board about money laundering risks if he had not been kept in the dark about a notorious junket operator’s alleged criminal links.

Micheil Brodie on Thursday told an inquiry he was not fully informed about incidents of alleged money laundering by the Suncity group in 2018 and 2019 and that he has still never been shown a report held by senior executives linking the junket’s operator to drug trafficking and triads. 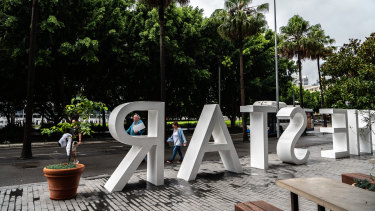 Star general manager of social responsibility Micheil Brodie said any regulated entity should be “as forthright in providing information as it can be.”Credit:Flavio Brancaleone

The Hong Kong Jockey Club report suggested Suncity was of interest to Australian Federal Police for laundering up to $2 million a day from 2013-2015. Counsel assisting the inquiry Naomi Sharp, SC, described the document as “horrifying”.

Brodie conceded he had never seen the report, agreeing that had left him ill-equipped to advise the board on allegations relating to Suncity, which at the time had exclusive access to a gaming salon.

“If I had been aware of this information, it may have changed the risk assessment I presented in relation to anti-money laundering compliance,” he said. “It probably would have caused me to do things that I didn’t do.”

He is the 23rd witness to give evidence to the public inquiry by the Independent Liquor and Gaming Authority, which is reviewing The Star’s suitability to hold its Sydney casino licence. The regulator is required to review any casino licences in the state every five years.

The royal commission style probe follows reporting in The Sydney Morning Herald and The Age, which exposed money laundering, criminal infiltration and wide-scale fraud at the Pyrmont casino.

It has previously heard Suncity was first given access to a private gaming room in 2016 provided the group used Star’s “cage” to purchase or cash in gaming chips. However, extensive evidence to the inquiry has revealed the group repeatedly breached this requirement.

Brodie on Thursday was asked to reflect on an internal investigation report titled “Operation moneybags”, reviewing Suncity’s exclusive use of the Salon 95 gaming room in May 2018.

The report detailed a cash payment of $45,000 being handed to Suncity staff in the salon office, a bag of cash being taken to the retail arcade of the casino complex, as well as a blue esky bag full of $50 notes being delivered to the private suite.

Brodie said the document, which he saw about the time it was produced, revealed the casino had concerns about Suncity, but that he did not remember thinking the operator was “very problematic”.

“I don’t recall thinking … in mid-2018 that we were confronting an operator that was trying to avoid compliance,” he said.

Brodie added that the incidents contained in the report were consistent with a money laundering typology known as the “Vancouver model”. The term refers to casino gambling being used to launder funds, taking its name from Vancouver in British Columbia where it is common.

Brodie agreed when asked by Sharp if the documents showed that problems with Suncity were more serious than he understood at the time.

“Does that suggest to you that you may not have been kept fully informed of what was going on in Salon 95 at the time?” Ms Sharp said.

Brodie, who is a former chief executive of the gambling regulator, agreed the casino should have informed the agency once it knew there had been a series of concerning cash transactions in the Suncity room.

“I think it’s incumbent on any regulated entity to be as forthright in providing information as it can be,” he said.