London: The US Army Chief of Staff has said the lesson of Ukraine for smaller countries fearing invasion from larger neighbours is that the public must be prepared to defend their freedom, if they are to have any chance of success. 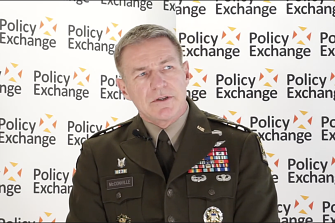 General James C. McConville,Chief of Staff of the US Army at Policy Exchange in London on Tuesday April 12, 2022.Credit:Policy Exchange

Carleton-Smith said countries were rarely in the position of choosing wars and that conflict more usually chose them at not in a way or time of their choosing.

Asked by The Sydney Morning Herald and The Age what their advice for Taiwan would be, amid Western fears China could be emboldened by Russia’s invasion of Ukraine and launch an invasion of Taiwan, McConville said governments must ask their public stark questions.

“I would suggest to every country that they take a hard look, whether it’s Taiwan, it’s Ukraine or anywhere, are your people willing to defend their country?

“Do they believe in the systems that they have? Are they willing to die for their country?”

He said the answer to these questions would set the stage for the scale of Western assistance.

Since Russia invaded Ukraine on February 25 in an effort to subdue the nation, attention has swung onto Taiwan, which China regards as a breakaway province. China has vowed to unite democratic Taiwan with the mainland by 2049, by force if necessary. The island nation is subject to frequent incursions on its airspace and sovereign areas at sea by Chinese planes and vessels.

General McConville said: “If a country itself doesn’t believe in what they want to do, their people are not willing to defend their country, then that makes it very, very challenging for people to help them in that situation.”

When asked about the contrasts between Afghanistan, which fell immediately to the Taliban as the President fled, and Ukraine, he said leadership was critical.

“Leaders stayed in the country,” he said of Ukraine. 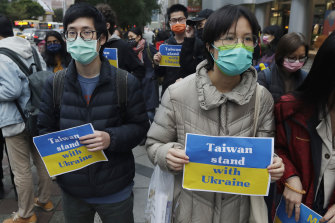 There has been a public outpouring of support for Ukraine in Taiwan since Russia launched its invasion.Credit:AP

“Military aged-men stayed and defended their country and there was a feeling within that country that the right thing to do was that you had to stay,” he said.

McConville said the United States and its allies had been training the Ukrainians for seven years and that they had developed significant military capabilities as a result. 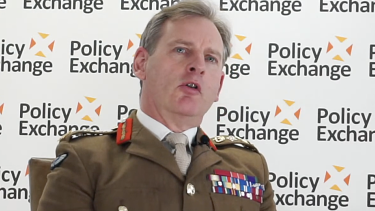 He said this was in contrast to Russian conscripts amid widespread reports of soldiers abandoning the battlefield.

“They are very, very challenged with their morale right now,” he said.

Western officials have said the Russians abandoned huge amounts of military equipment, including tanks as they withdrew from northern Ukraine to regroup for their assault on the Donbass in Ukraine’s east.

Carleton-Smith said the rapid and united Western response to Ukraine set a precedent for other authoritarian regimes, including China and Iran, who are out to challenge and upset the current international order.

Predicting a frozen conflict or stalemate in Ukraine that would enable the Russians to claim a measure of success and use the area as a launch point for subsequent campaign.

“And I don’t think the international community and Europe, is going to be able to live comfortably with a frozen conflict in Ukraine,” he said.

Russia is deploying General Aleksandr Dvornikov, who oversaw Russia’s Syrian intervention, to command the assault on the Donbas.

“As I understand it, he is creating a new headquarters to command the next phase of the campaign but he comes with a very brutal reputation from his previous performance in Syria,” Carleton Smith said.

He said he was surprised by the Russians’ “poor” performance because he thought that Russia would have learnt from the West’s Middle Eastern land interventions.

“The fact that they went all in with a strategy that really resembled Grozny, [Chechnya] as opposed to keyhole surgery I think has been a surprise.

He said the Russians were surprised by the West’s decision to release intelligence warning of Russia’s likely moves ahead of the invasion that they would previously have kept classified.

That must have surprised them,” he said. “They seem to lack low-level initiative,” he said.

“Those are very significant numbers in terms of reconstituting a capable and motivated force,” he said.

“Those are very difficult numbers, probably, to conceal from the families and the wider Russian public.”