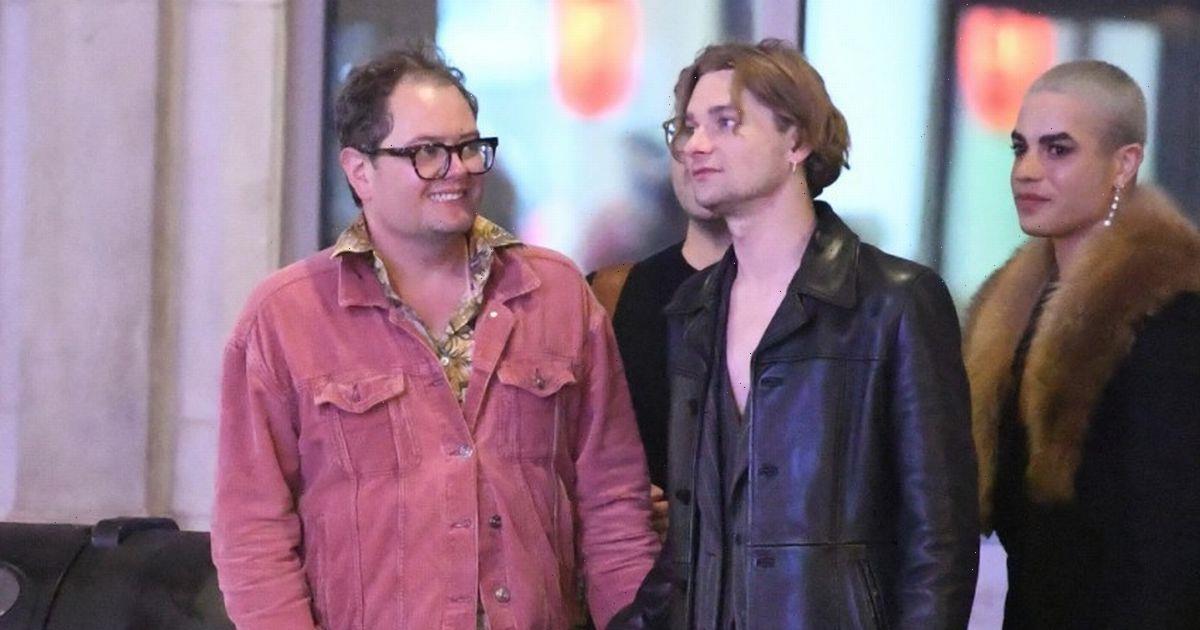 Alan Carr has been pictured holding hands with a friend as he headed out on a night out in London.

The comedian, 45, was seen looking cosy with his companion as he blew off some steam during an evening out with friends in Soho.

The pair were seen laughing together and chatting as they attempted to flag down a taxi on the road, holding hands on various occasions as they tried to get home from their evening out.

Alan was seen wearing a pale pink jacket over a shirt and grey jeans along with his iconic heavy-framed black glasses.

His companion, meanwhile, looked stylish in an oversized leather jacket and trousers and wore a simple gold earring and ring to complete his look.

The comedian split from his husband earlier this year following 13 years together and three years of marriage.

The former couple broke the news in January via a statement through PA news agency, explaining they were separating "amicably" after three years of marriage.

"After 13 years as a couple and three years of marriage, Alan Carr and Paul Drayton would like to announce they are separating," the statement read.

It continued: "They have jointly and amicably made the difficult decision to divorce and go their separate ways.

"We request that their privacy is respected at this sensitive time."

Alan and Paul first got together over a decade ago andtied the knot in 2018, which his close pal Adele is said to have paid for.

At the time, a spokesperson shared their excitement over their wedding as they said: "Alan Carr married his long-term partner Paul Drayton at a small private ceremony in LA last week.

"The couple are currently on honeymoon in Mexico and are planning a big celebration with all their family and friends back in the UK later this summer. They are both extremely happy."

Alan had supported his ex in his struggles with alcohol abuse, which resulted in Paul being arrested in 2021 for driving into a police car while under the influence.

Speaking on Kelly Hoppen's podcast in 2020, Alan said: "It's been tough for Paul during lockdown.

"He's been so good and I'm so proud of him," the former Chatty Man host said.

He added: "I like eating and drinking, but it was ridiculous before – we were cracking open a bottle of rosé because it was a Monday.

"We were out of control. It was a laugh, but looking at Paul, sometimes the party has to stop."

It comes after Alan’s ex-husband Paul Drayton recently completed his stint in rehab after having avoided a 14-week prison sentence in January.

He went on to plead guilty to the charges he was facing and was initially sentenced to over three months behind bars, butPaul went on to be released after just two days.

Taking to Instagram on Tuesday 15 February, Paul answered a Q&A where he was largely asked about his time in rehab.

“I’m out now and I completed the full treatment which was 28 days,” he told his followers, “But in between that I went to hospital to have the operation and to court and prison.”

It was revealed back in December thatPaul needed to have surgery on his skullafter doctors found a potentially fatal blood clot on his brain.

Another of Paul’s 11,500 Instagram followers asked if he thought rehab had helped him.

“A very difficult question to answer,” he began. “I do feel like I’d hit rock bottom this time, therefore this rehab has really helped and I’m really determined to stay sober.”

A third person proceeded to ask Paul what the best and worst part of being in rehab was.

He replied: “The best thing is knowing that you’re in there and that you’re safe. The worst thing is hearing about other people’s addictions and problems.”