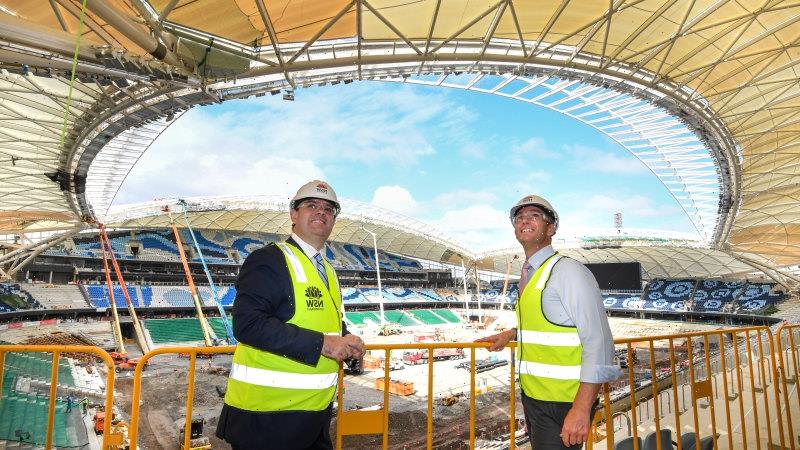 Four thousand pieces of steel stretching more than 19 kilometres in length now form the roof of the rebuilt Sydney Football Stadium, which is almost complete ahead of its opening in September.

The stadium will hold 45,000 spectators, with the NSW government set to pitch the venue to the global market as major events re-emerge from the pandemic. 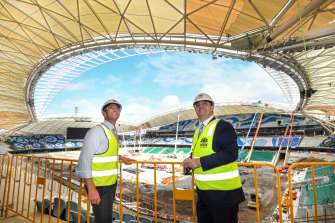 Minister for Infrastructure and Cities Rob Stokes and Minister for Tourism and Sport Stuart Ayres at Allianz Stadium on Tuesday.Credit:Peter Rae

All 4000 pieces of steel making up the new stadium roof were fabricated in western Sydney, weighing a combined 2000 tonnes, and the structure is designed to enhance sound reverberation when the seats are full.

Demolition and construction of Allianz Stadium was a hot issue before the last state election when polling showed the state government’s policy was unpopular with almost 60 per cent of voters.

Then-Labor leader Michael Daley said the 2019 poll would be a referendum on stadiums, saying he would not rebuild the proposed $730 million ground if elected. The state government on Tuesday confirmed the final price tag was around $890 million.

Premier Dominic Perrottet said the stadium, which supported 1100 jobs during construction, would boost local tourism and create further jobs once it opens, hosting NRL, A-League and Super Rugby matches as well as music and major events. 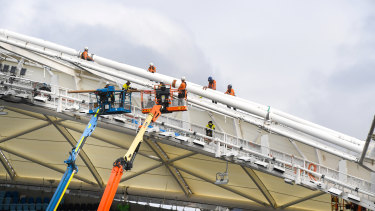 The new stadium is set to open in September 2022.Credit:Peter Rae

Minister for Tourism and Sport Stuart Ayres was tight-lipped about what the first game at the new stadium would be, but it is expected to be an NRL clash.

Ayres said the project was “value for money” compared to similar infrastructure projects around the world, adding that the finished roof would give more spectators cover during wet weather.

“Sydney is a global city … we’re in an immensely competitive global market for major events. If you don’t have the best facilities, you can’t expect the best,” he said.

“I think if it rains during an outdoor event people are always going to be subject to a little bit of rain, but there is a lot more coverage with this roofline.” 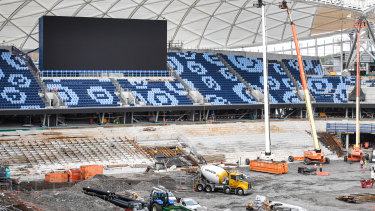 The project in Sydney’s east is 90 per cent complete.Credit:Peter Rae

The premier last week flagged timeline changes for major projects in the government’s infrastructure pipeline, including the deferral of mega projects like the Beaches Link motorway and an extension of the Parramatta light rail line.

However, Ayres on Tuesday said shifting timelines would have no bearing on the final stages of Allianz Stadium.

“We’ve already spent it [$890 million]. The stadium is built. So, I think the challenge with our infrastructure pipeline is the projects that we haven’t started. And it’s so important to keep these projects moving,” he said.

Allianz Stadium last hosted a game in September 2018, when the Roosters defeated the Rabbitohs in an NRL preliminary final.

Minister for Infrastructure Rob Stokes said the stadium facade was also complete, with work continuing on its surrounds.

“Unlike the old gated SFS, the new design of the stadium fosters an open atmosphere and welcoming public open space that is no longer limited to just game-day activity.”

On the state’s $110 billion infrastructure pipeline, Stokes said he was having regular conversations with federal counterparts, including about Commonwealth funding for the second stage of the Parramatta light rail project.

“We have raised this as a project that we believe is worthy for them to consider, given a federal election is obviously in the offing,” he said.

“We would welcome federal support and that would certainly make our decision even more attractive.