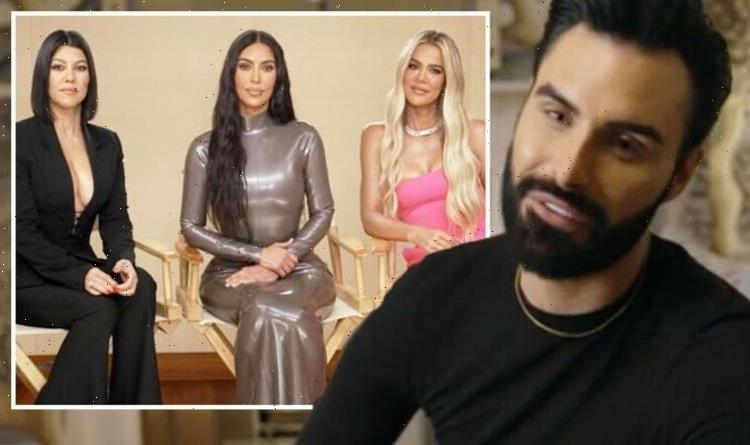 The Kardashian sisters Kim, Khloe and Kourtney joined presenter Rylan Clark on The One Show to discuss their new Disney+ series, The Kardashians. Rylan quickly got down to business to find out what fans can expect to see from the family and addressed the rumours of marriage for Kourtney. However, within seconds of the interview beginning, BBC One viewers were not impressed with the segment and slammed the chat on social media.

Taking to Twitter, user @Jonsta1990 commented: “The Kardashians on #TheOneShow, it’s an unwatchable no from me.”

@iCrowby fumed: “Just when you think #TheOneShow couldn’t get any worse, they turn the show into a Kardashian trailer.”

@FlopsyPickle slammed: “I do not and will never understand the fascination people have with the unlikeable Kardashians.”

@isitjustmeMrsT said: “Christ, why is #theoneshow giving airtime to the Kardashians?”

However, not all users were annoyed with the interview, and Molly Holmstead celebrated: “Yes! Can’t wait to see you back on my screen, have missed this family so much!” (sic).

Speaking about their new series and how it would be different to their previous series with Hayu, Kim explained: “I think that the show is really different in the sense that we kind of show ourselves individually.

“The other show was less documentary style and showed us all as a family all the time, so it is really interesting to see what we do daily, individually.

“I think we are still who we are, the viewer will also love seeing us come back together as a family.”

Speaking about the year break the family took away from the cameras, Kourtney described: “We had a good year off, and I think it felt amazing.

“It really allowed us to see what our lives were like individually instead of always being together, and I think we barely saw each other as much, we just had a break -“

“Speak for yourself,” Khloe interrupted but Kourtney continued: “We saw what was important to our lives without this, what is important to me now today, starting from scratch.”

Kim continued: “When you have some time off, you can really regroup and live your life.”

Rylan quickly touched on the pictures that Kourtney released of her and her fiance Travis Barker getting “married” in Vegas with an Elvis Presley impersonator.

He asked: “Am I right in saying that I saw some pictures of the white chapel and Elvis singing, a bouquet in hand, is something going on?”

Kourtney laughed and awkwardly replied: “Urm, it was fun, Elvis sang when I walked down the aisle.

“I mean, congrats on like the best night of my life, it was just a really fun, wild Vegas night that I am sure many people have had or wished they had.”

Back in the studio with hosts Jermaine Jenas and Alex Jones, Jermaine revealed: “Well, we know that the wedding pictures were just for practice.

“There is actually no licence as yet, which does beg the real question, though, is there a wedding on the cards for Kourtney?

“Well, we are going to have to just watch this space, aren’t we?” he added to which Alex excitedly quipped: “I can’t wait to call Rylan and get all the goss.”

The One Show airs weekdays from 7pm on BBC One.