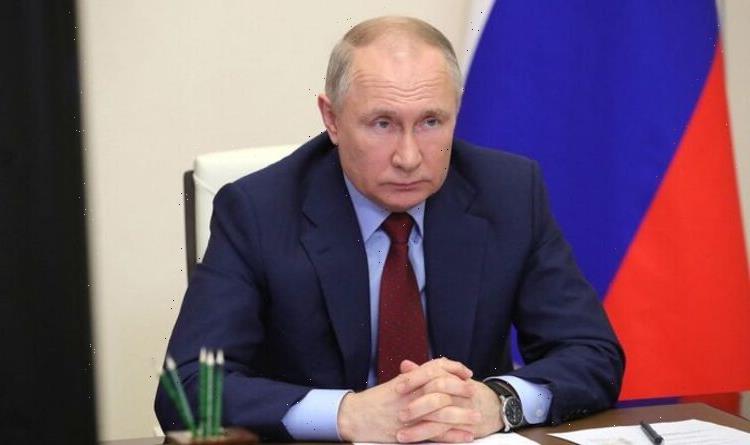 Russia is thought to have the largest nuclear stockpile on the planet, with around 6,000 nuclear warheads. But the most terrifying of all is Russia’s “Dead Hand” system, thought to be one of the most destructive nuclear systems on Earth. Also dubbed the “Perimeter”, the system from the Cold War-era was reportedly upgraded three years ago. It is an automatic control system that is intended for a retaliation nuclear strike.

This means if Russian territory is impacted by a nuclear attack, the Perimeter system automatically strikes the enemy in return.

The system is said to be capable of carrying around 30 of the world’s most dangerous nuclear warheads and can release them all at once, according to some reports.

Back in 2011, the Russian commander at the time, Sergei Karakaev, admitted that the horrifying weapon is still around and is even on combat duty.

He told KP.RU: “Yes, the Perimeter system exists today – she is on combat duty.

“And when the need arises for a retaliatory strike, when there is no way to bring a signal to some part of the launchers, this command can come from these missiles from the Perimeter.”

It is thought that a command and control system is able to measure communications on military frequencies, radiation levels and other indications of nuclear attacks.

Ivan Konovalov, Development Director of the Foundation for the Promotion of Technologies of the 21st Century, explains: “The system passed several modifications throughout the years of exploitation.

“First of all, Russia integrated into its new means of radio-electric intelligence such as Voronezh class radars capable of detecting missile launches up to 7 000 kilometres away.

It is also believed to transmit other attack orders on Russian forces too, such as with bombers or submarines.

Once a measurement of a nuclear attack is picked up, it is thought that the Perimeter can start a sequence that fires Russia’s intercontinental ballistic missiles (ICBMs).

Back in February, Russia’s Foreign Minister Sergei Lavrov stressed that the escalation of the Ukraine conflict into a third World War would be “nuclear and destructive”.

Putin also ordered Russia’s nuclear deterrence forces to be put on “high alert” as the tension in eastern Europe continued to soar.

Brandon Weichert, a geopolitical analyst and author of Winning Space: How America Remains a Superpower, told Express.co.uk that these may be more than just empty threats.

He said: “Whenever Russia is engaged in warfare that NATO/US have taken an interest in, one should always be concerned about the prospect of nuclear escalation.

“Putin has a very different view of non-strategic nuclear weapons (tactical nukes of the sort that are being stockpiled in Russian-controlled Kaliningrad).

“Putin views those weapons not in apocalyptic terms but as giant artillery pieces to be used to soften up the lines of opposing forces (NATO).”

According to the Federation of American Scientists (FAS), the large bulk of Russia’s suspected 6,257-strong arsenal of nuclear warheads are located towards the country’s west.

There is a test centre at Yapustin Yar, not far from the west coast, and an intercontinental missile base (ICBM) base Dambarovksiy, one of the nearest to Ukraine.

There are several more bases, including Darazhnya and Pervomaysk dotted further up the coast.

The country has claimed that all nuclear weapons that used to be deployed outside Russia have been withdrawn into its own territory.

Around 1,444 of Russia’s weapons are known as strategic warheads, weapons that are designed to be used on targets.