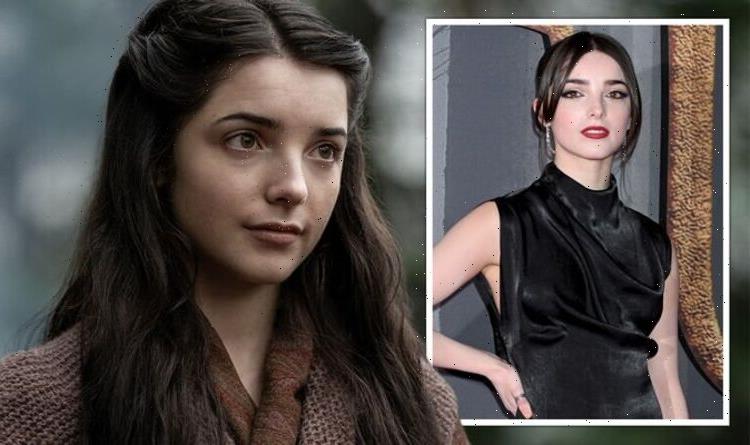 Claire Fraser (played by Caitriona Balfe) was shaken when she realised dysentery had taken hold of Fraser’s Ridge with residents falling ill at an alarming rate. After falling ill herself, she was furious to recover and learn Malva Christie (Jessica Reynolds) was claiming Jamie (Sam Heughan) had taken advantage of her and she was now expecting his child. In a tragic turn of events, Malva was found with her throat slit in the Fraser’s vegetable patch. Why did Jessica Reynolds leave Outlander as Malva Christie?

In an another feature-length episode, there was more trouble on the horizon for the Fraser family as sickness took hold of the fisherfolk who’d set up home on the Ridge.

However, it wasn’t the only thing to trouble the family as Malva arrived with her father Tom Christie (Mark Lewis Jones) and brother Allan (Alexander Vlahos) to spout lies.

Malva claimed Jamie had slept with her on several occasions while Claire was ill and as a result she’d fallen pregnant.

Furious, Claire slapped her, knowing Jamie would never betray her or sleep with another woman while she was alive.

Angry Jamie would not leave his wife for her, Malva stood by her claims and eventually, the residents on the Ridge all turned against the Frasers.

Claire tried to speak to Malva but she spat at her former mentor claiming she was a witch.

As a result, the time-travelling doctor hit back warning Malva to stay away from her family. She later threatened Malva in a dream as she insisted she would kill the young woman.

Unfortunately, in the final moments of the episode, Malva was found dead in the Fraser family’s vegetable patch.

Claire desperately tried to save her baby but was unable to and she was seen crying as the mother and her child lay in a pool of blood.

Why did Jessica Reynolds leave Outlander as Malva Christie?

It’s likely actress Jessica left her role as Malva simply because this was the storyline for her character.

The young woman dies in the Outlander novels by Diana Galabdon so her death wasn’t completely unexpected.

It would not make sense for Jessica to remain on the show as Malva now her character is dead.

It’s likely the actress knew of her character’s tragic storyline and only ever expected to feature in a handful of episodes.

Actress Jessica previously teased tragedy for her character, telling TV Insider: “I think ultimately there is a lot of tragedy.

[Malva’s] had a rough past, but there are moments where she does get carried away, and maybe isn’t always the most morally sound person.”

The seventh, and penultimate, episode of the series will no doubt deal with the fallout of Malva’s death.

With Claire being the one to find her body, it’s likely she will be the one blamed for killing her.

There’s also still the mystery of who the baby’s real father is to solve. Fans will have to wait until next Sunday for answers.

Outlander season six airs on Starz in the US and StarzPlay in the UK.