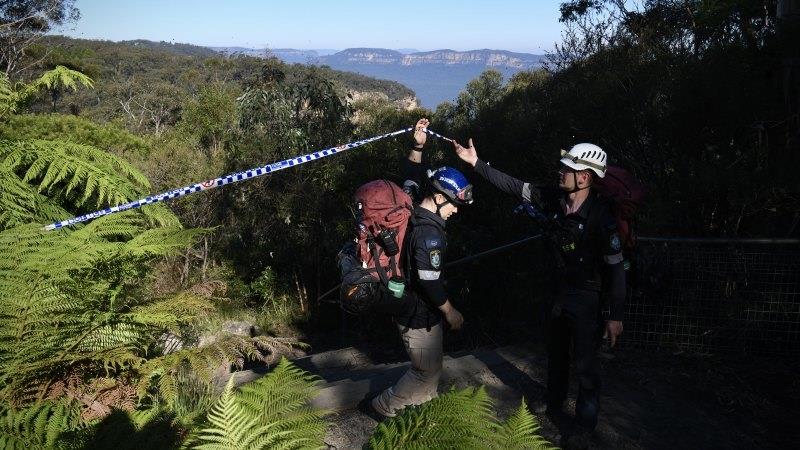 Roaring waterfalls and a rare day of sunshine had drawn flocks of tourists to the Blue Mountains on Monday, but what seemed like an ideal moment for traversing trails turned to tragedy when part of a sodden cliff face dislodged below Wentworth Falls.

A family of five from Britain were caught in the collapse, and the father, 49, and his nine-year-old son were killed. The mother, 50, and a second son, 14, were critically injured and remain in hospital on Tuesday, while the couple’s 15-year-old daughter walked out to safety unharmed before being treated for shock. 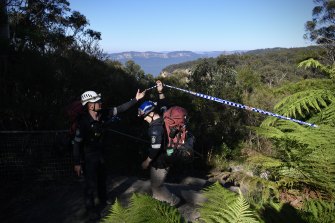 Police rescue workers assess the stability of the walking track before recovering the bodies on Tuesday.Credit:Dean Sewell

Amid concerns about further landslides with more wet weather forecast, all but two lookouts in the Blue Mountains National Park will be closed to the public from 9am on Wednesday.

The tragedy has prompted some people to ask why the track the family took on Monday was left open when surrounding tracks were closed due to the risk of rockfalls.

Blue Mountains Day Tours owner Graham Chapman was at the end of a tour at the Wentworth Falls lookout around 1.40pm when the incident occurred.

The group was overtaken by emergency services on the track before they saw a rescue helicopter fly above. He immediately turned around and brought his group back to safety. 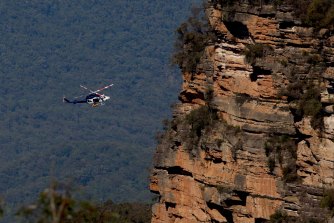 Mr Chapman said he had “lost track” of the number of landslides that have happened in the past two years due to more severe weather. “I’m seeing more and more landslides at the moment, and people aren’t hearing about it,” he said.

He said Monday was just the fourth day in 40 days that it didn’t rain, and people were flocking to the mountains to take advantage of the sun. But he said it was “common sense” the conditions could lead to a landslide risk.

“[The Blue Mountains walking trails] are all on sandstone. We are totally at the mercy of the weather, the mountains are forever on the move.”

An experienced bushwalker, Mr Chapman has run and walked the trail taken by the British family on a number of occasions, but said he would never take tourists there because it’s “not for the faint-hearted”.

However, he said the track itself, while old, is well maintained. The problem is the unpredictable movements of the rock above and around it.

“National Parks and Wildlife are very good at maintaining tracks,” he said. “I don’t think they could do much more. Sometimes landslides occur because there’s so much moisture in the earth, beyond what the eye can see,” he said.

Last week, the NSW National Parks and Wildlife Service notified tour groups and residents of scheduled upgrades and repairs involving a helicopter in the Wentworth Pass area, which were set to go ahead from April 6 to 8.

A spokeswoman for the NPWS said the planned upgrade did not involve the track where the landslide occurred, but in alerts posted by Ultra-Trail Australia on Monday afternoon (before the running event was aware of the landslide), the track in question – Wentworth Pass – was included in the area to be closed for the helicopter operation.

The repair plans have now been indefinitely postponed following the tragedy, with more wet weather due in coming days.

In a statement on Tuesday, NPWS confirmed that the Wentworth Pass track was inspected in the days before the rockslide as part of a routine track assessment program.

The NPWS “has a world class program in place to assess geotechnical risks and maintain the safety of walking tracks and other infrastructure to the greatest extent practicable,” the statement said.

“Unfortunately it is not possible to predict and eliminate all natural risks such as rockslides, which can occasionally occur around the state.”

Darren Levien, a tour guide for Tours R Us, also was taking a group through Wentworth Falls at the time of the incident. He said the waterfalls were “roaring” and at the highest levels he had seen. All trails were filled with “big” puddles which his group had to constantly step over.

He said the landscape in the valley is at its most beautiful when saturated. “You sort of get lost in the lustre and you don’t really think about the dangers of landslides,” he said.

Mr Levien said the family would have put the day aside to go to the bottom of the waterfall.

“At the bottom of the valley, you’ve got a cliff right on the side of you, so rocks and rubble must have just landed on them.

“I had heard there had been a few landslides this week, but for us it’s about trusting the council that the ones left open are normally OK,” he said. “I’m not sure why this track was left open.”

“Probably with hindsight any of those tracks, given the vast amount of rain we’ve been having … a certain amount of care should be taken.”