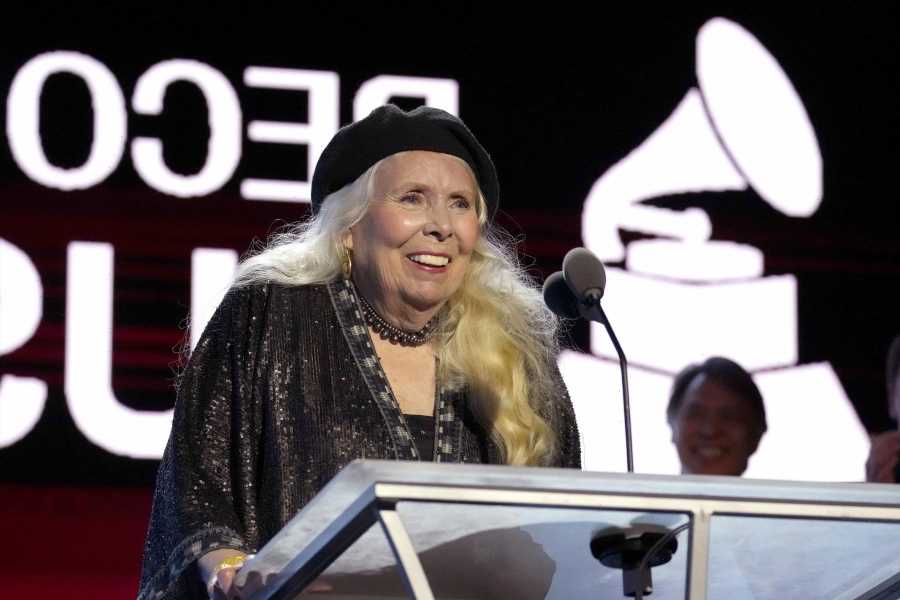 This time last year, Joni Mitchell was Zooming in to Clive Davis’ virtual Grammy party — kicking off the night with wine and dressed in finery, and then, as the hours wore on, kicking back to watch performers in pajamas, with popcorn and her trusty ginger cat Bootsy in tow. (Bootsy was named after Puss and Boots if you must know — and we must.)

This year, however, she strides down the red carpet in a sparkling shawl and beret at the MusiCares Person of the Year event — for which, of course, she is said person. The only animal in attendance is the diamond wolf’s head that tops her cane.

“My house is not a bad place to be quarantined,” Mitchell tells Rolling Stone, referring to last year’s Grammy festivities, which were extremely limited and sometimes virtual due to the pandemic. “We have a group of people — I call the Joanettes — day nurses and night nurses, and they’re all wonderful people who I adore.” She gestures at the dapper gentleman to her left, her physical therapist, who she’s brought along for the ride. He sits beside her during the entire night of performances, during which a litany of Grammy nominees and winners serenade Mitchell — a kind of “this is your life” in song.

Joni Mitchell, fourth from left, and artists perform “Big Yellow Taxi” at the conclusion of the 31st annual MusiCares Person of the Year benefit gala honoring Mitchell on Friday, April 1, 2022, at the MGM Grand Conference Center in Las Vegas.

Brandi Carlile and Jon Batiste acted as ringleaders for the evening, which kicked off with jazz pianist Herbie Hancock and saxophonist Terrace Martin performing “Hejira,” off of Mitchell’s 1976 album of the same name. Carlile has become a close friend of Mitchell over the years, she tells Rolling Stone, dressed in a sharp denim suit she jokingly calls a “Canadian tuxedo.” When she first heard Mitchell’s music, however, Carlile admits that she balked at the lyrics. “When I was 22, T-Bone Burnett played me ‘All I Want,’ but when it got to the lyric, ‘I want to talk to you/I want to shampoo you,’ I was like, ‘Turn this song off; I want nothing to do with this song.’ I didn’t have the maturity for it.” Still, when she heard the 1966 cut “Little Green,” she changed her proverbial tune. “I realized she was probably the toughest songwriter that ever lived,” she says. “I know when I write a song, at some point, I’m going to have to get in my car and drive to Joni’s house and play it for her. So I wouldn’t write a song that I would be embarrassed to play for her.”

Angélique Kidjo, who performed “If” from 2007’s Shine, also found strength and inspiration in Mitchell. When she was first starting out in jazz school, Kidjo tells Rolling Stone, she was met with consternation from her fellow classmates, who couldn’t understand why a woman from Africa was studying jazz. For her part, she didn’t understand why jazz had to be so difficult, so rarefied. When a friend turned her on to Mitchell, she says, she found her path. “From the first time I listened to the song ‘The Dry Cleaner From Des Moines’ I was like, ‘This is what I’m following.’ She and Ella [Fitzgerald] were on both sides of my bed. That’s it.”

St. Vincent performs “Court and Spark” on stage during the 2022 MusiCares Person of the Year gala honoring Joni Mitchell at the MGM Grand Conference Center in Las Vegas, Nevada, April 1, 2022.

For Annie Clark, a.k.a. St. Vincent — who performed 1974’s “Court and Spark” — Mitchell is a maker of mantras, a guidepost. “Much of my listening to Joni has been being a woman on the road,” Clark tells Rolling Stone. “Feeling that desolation and listening to Joni talk about it, too, and feeling understood in a very specific way. I think about her singing, ‘There’s comfort in melancholy’ [from ‘Hejira’] every day. That’s my mantra. She’s so deep. She’s the deepest.”

The night was rangy, with performers from all generations and genres. Foo Fighters frontman Dave Grohl’s daughter, 15-year-old Violet, gave a stunningly precise rendition of 1974’s “Help Me” — declining to hit the carpet, likely, to avoid journalists badgering her about the recent death of her father’s bandmate, Taylor Hawkins. John Legend gave a truly masterful performance of 1971’s “River,” tickling out the Christmasy tune as he rotated on a stage that echoed the night’s Instagram-worthy dessert: a Grammy award spinning on a record, all entirely edible. (When the camera flashed Mitchell across the massive screens, hers was untouched — perhaps because there’s nothing all that elegant about biting into a phonograph.) Beck also made an appearance, choosing the very Beckish track “The Jungle Line,” off 1975’s deliciously avant-garde classic, The Hissing of Summer Lawns.

One of the standout performances of the night by far came from Billy Porter, who — decked out in chainmail made of playing cards — made the oft-covered 1966 track “Both Sides Now” entirely his own, despite the fact that the song is at peak saturation point at present after being featured in Best Picture winner, Coda. And then there was Carlile’s earth-shattering rendition of 1970’s “Woodstock,” accompanied by Stephen Stills on guitar; Stills initially covered the song with Crosby, Stills, Nash & Young. Despite only rehearsing the song once — or so he says — Stills ripped through “Woodstock” as if it were five decades ago. “[We did] her arrangement rather than mine, which was too bombastic,” Stills tells Rolling Stone. “It’s a night for Joni so we should do it like she does.”

Stephen Stills and Brandi Carlile perform onstage during the MusiCares Person of the Year ceremony honoring Joni Mitchell at the MGM Grand Marquee Ballroom on April 01, 2022 in Las Vegas, Nevada.

Cyndi Lauper, Jon Batiste, Graham Nash, and more — three hours of music dedicated to a woman who, as Carlile says, “invented the confessional.” It all capped off, naturally, with a massive singalong of 1966’s “The Circle Game” and 1970’s “Big Yellow Taxi,” featuring, wonderfully, a rare performance from Mitchell herself.

Despite the march through the years that the event was, however, Mitchell is far from done. “I want to get a small jazz combo — which would be Wayne Shorter and Herbie Hancock and Larry Klein on bass maybe — and cut some standards,” she tells Rolling Stone. When asked what she’d most like to cover, she smiles wide, unable to stop herself from singing a snippet from a track by Lambert, Hendricks & Ross, a favorite of Mitchell’s over the years. The Joanettes all laugh at the suggestion. Then, at the impromptu concert’s end, she and her wolfhead cane are whisked off into the night.