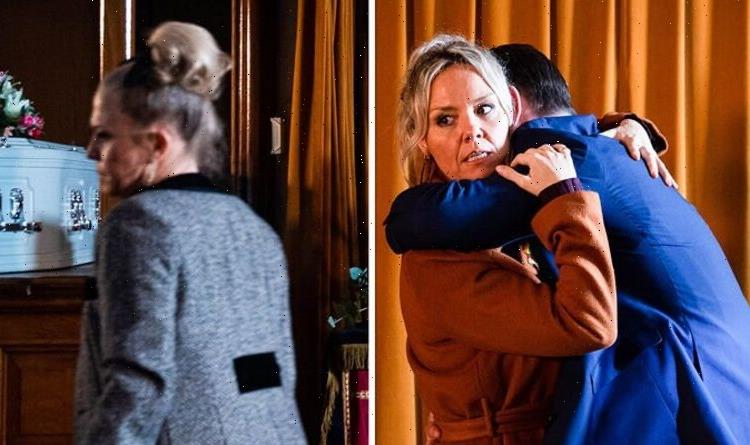 EastEnders fans will soon see the Carter family endure an emotional day in Albert Square. The family will remember the life of Tina Carter (played by Luisa Bradshaw-White) at her funeral, but the service could prove too much for some to handle. According to official BBC soap spoilers, Linda Carter (Kellie Bright) will be left angered by Janine Butcher (Charlie Brooks) at the funeral.

In upcoming scenes on EastEnders, the Carter family will gather for Tina’s funeral.

During the service, Shirley Carter (Linda Henry) gives an emotional eulogy about her sister.

Seeing Mick struggle, Janine rushes over to support and comfort him.

Official images released by the BBC show some of the drama unfolding at the funeral.

The photos show Shirley breaking down in tears as she pays tribute to her late sister.

Meanwhile, Linda is seen getting up to leave as Janine hugs Mick in front of the family.

Regular EastEnders viewers will know Linda has been away from Albert Square, but is set to return just in time for the funeral.

While she’s been away, Mick seems to have moved on with Janine as the unlikely couple have been growing closer.

As Mick struggles to come to terms with the loss of Tina and the circumstances of her death, Janine has been a welcome shoulder to cry on.

When she sees Janine comforting Mick at the funeral, Linda may feel all hope of winning back her husband is lost.

Will Linda come to the realisation that she may not be able to rekindle her marriage to Mick?

If so, she may quickly spiral out of control with her alcoholism as she watches Mick move on with Janine.

It seems as though Janine is winning in the war for Mick’s affection.

But, will this really mark the end of Mick and Linda’s marriage or could there be hope on the horizon?

In a recent interview, Kellie Bright, who plays Linda in the soap, spoke out about her character’s return.

When asked how Linda is feeling about seeing Mick again, Kellie said: “I think she is dreading it, to be honest.

“I think she puts on a front but underneath she feels pretty wretched.

“I think she’s very hurt and I think she’s actually terrified of the future and what it might look like for her,” the soap star told Digital Spy.

EastEnders continues Monday at 7:30pm on BBC One.