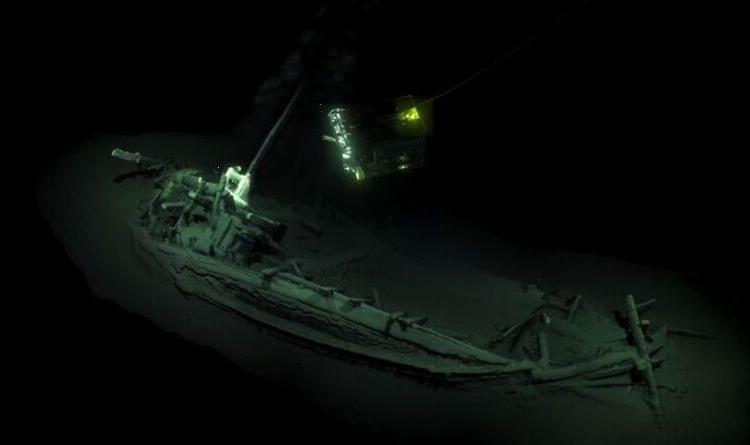 Black Sea shipwrecks are generally very well preserved compared to those discovered from similar periods in different areas, namely the Mediterranean, due to low levels of oxygen in shallow waters. Maritime archaeologists and oceanographers therefore use the waters of the Black Sea to uncover the secrets of ancient civilisations in southeast Europe and western Asia. As ancient humans began to build settlements, both the Mediterranean and the Black Sea became crucial highways of trade and travel.

The 23-metre vessel is believed to have lain undisturbed off the Bulgarian coast, at the bottom of the Black Sea, for some 2,400 years.

Lying more than 2,000 metres below the surface, its mast, rudders and rowing benches were still complete.

It is believed to be an ancient Greek ship, and closely resembles ships that would decorate ancient Greek wine vases two millennia ago.

Professor Jon Adams, a maritime archaeologist at Black Sea Maritime Archaeology, said at the time: “A ship surviving intact from the classical world, lying in over two kilometres of water, is something I would never have believed possible.

“This will change our understanding of shipbuilding and seafaring in the ancient world.”

The team left the vessel on the seabed where it was found, but a group from the University of Southampton carbon dated one small piece of it, and claimed the results “confirmed [it] as the oldest intact shipwreck known to mankind”.

The ship, which dates back to 400 BC, was found on its side in a remarkable state of preservation because the water is anoxic — free of oxygen.

Given the depth at which it lies, it is beyond the reach of modern divers.

Dr Helen Farr, an archaeologist at the University of Southampton, told the BBC: “It’s like another world.

“It’s when the ROV [remote operated vehicle] drops down through the water column and you see this ship appear in the light at the bottom so perfectly preserved it feels like you step back in time.”

“It’s not deteriorating and it’s unlikely to attract hunters.”

Archaeology teams used two underwater robotic explorers to map out a 3D image of the ship during investigations 80 kilometres off the Bulgarian city of Burgas.

The vessel, one of 67 discovered during three years of academic research, bears similarities to the so-called Siren Painter seen on the Siren Vase in the British Museum.

The vase, which dates to 480 BC, shows legendary Greek king Odysseus strapped to the mast of his ship as it sails past three mythical sea nymphs, whose tune was believed to have driven sailors to their deaths.

The ship’s cargo is so far unknown, and would allow the team to enhance their understanding of seafaring two millennia ago.

Dr Farr said: “Normally we find amphorae (wine vases) and can guess where it’s come from, but with this it’s still in the hold.

“As archaeologists we’re interested in what it can tell us about technology, trade and movements in the area.”

The anoxic layer makes up more than 90 percent of the volume of the Black Sea, preventing the physical and chemical processes that result in the decaying of vessels discovered in British waters, for example.

Wood and rope are generally the first things to fall to the sea as bacteria eat away at the material, but these bacteria cannot survive without oxygen.

Instead, ships discovered in the Black Sea can be so well preserved that individual chisel and tool marks may still be seen.

The ancient Greek vessel reinforces the idea that the waters of the Black Sea are “an incredibly rich museum of human history”, according to Fredrik Hiebert of National Geographic.

He said: “This wreck shows the unprecedented potential for preservation in the Black Sea, which has been a critical crossroads of world cultures for thousands of years.”