The Victorian government is calling for the minimum wage to rise by at least 3.5 per cent to eclipse the rate of inflation as Australians struggle with living costs, while NSW is urging caution.

Both states have made vastly different submissions to the industrial umpire’s annual wage review, with the former pointing to the pandemic as the reason to bolster living standards of low-paid workers, and the latter highlighting it as a reason to be wary of wage growth. 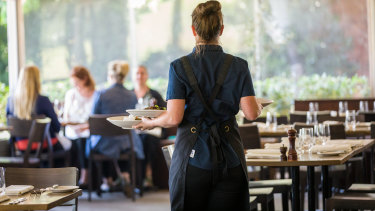 The Victorian government is calling on a 3.5 per cent increase in the national minimum wage.Credit:Natalie Ord

“An increase in the [national minimum wage] and award wages of less than 3.5 per cent would effectively be seen as a cut to relative living standards and the needs of the low paid.”

The Victorian government also called on Fair Work to consider a higher increase to modern awards for lower-paid, award-reliant workers in often female-dominated sectors such as retail and hospitality, accommodation and food services and health care and social assistance.

“This would offset the disproportionate impact of the coronavirus on these sectors and workers … and would go some way to narrow the persistently wide gender pay gap, particularly in the female-dominated health care and social assistance sector.”

The national minimum wage, reviewed annually by the Fair Work Commission, applies to employees not covered by an award or registered agreement. Any increase also flows to about 2 million employees on higher industry awards linked to it.

The Australian Council of Trade Unions is calling for a 5 per cent increase, while employer peak body Australian Industry Group is proposing a 2 per cent rise, which would lift the minimum wage by 41¢ an hour from $20.33 to $20.74. With the federal budget forecasting inflation of 3 per cent through 2022-23, that would represent a fall in after-inflation wages for workers.

The Master Grocers Association, which represents independent retailers, has called for a wage freeze. The Housing Industry Association has also made a submission warning it was “untimely, if not appropriate” to increase apprentice wages, saying it would erode the effect of government stimulus measures.

The Coalition-led NSW government said in its submission wage growth should be driven by increasing productivity, lowering taxes, reducing bureaucratic hurdles, and encouraging competition, and the Fair Work Commission should take a “cautious approach” to the review.

“Minimum wages must not act as an impediment to affected workers securing and maintaining employment or regaining employment once out of the workforce,” the submission reads, adding the minimum wage shouldn’t be raised so that it “hinders an enterprise’s competitiveness.”

It said that while higher pay could lead to greater workforce participation, “that needs to be balanced against potential negative impacts on the supply of jobs for low paid workers, particularly against the background of continuing COVID-related uncertainty.”