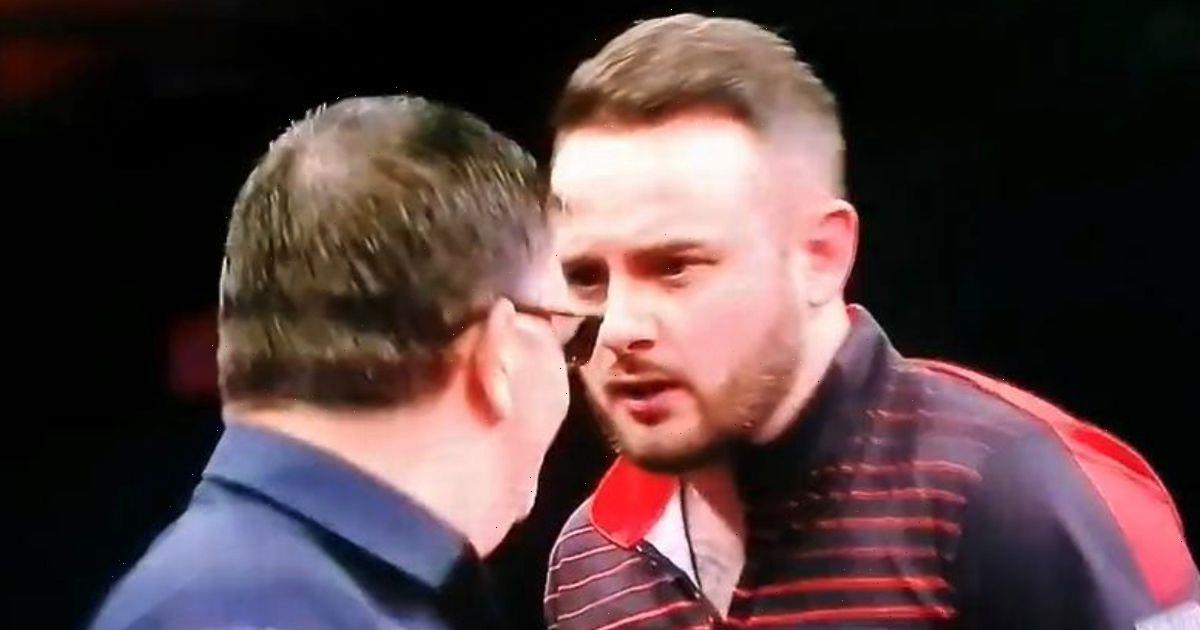 For a game that requires no physical contact whatsoever – darts stars come to blows on stage more often than you might expect with tempers often boiling over as millimetres separate thousand of pounds in prize money.

From Adrian Lewis and Gary Anderson to Gerwyn Price and Daryl Gurney, the familiar sporting faces have all been involved in on-stage battles that don't involve the board.

Daily Star Sport has now taken a look at seven times that the oche turned into a boxing ring as players got at each other's throats, with one former world champion even being handed a suspension.

Joe Cullen says that Gary Anderson called him a cheat on stage during their Premier League Darts clash in March – after the Scot threw away a lead to crash out.

Having shaken hands with his rival and then the officials, Cullen walked back towards the tables and was met by an annoyed Anderson, who spoke in the ear of the Englishman.

The argument continued as Anderson walked off stage, with Cullen then doing an over the top celebration and brushing off the complaints of his counterpart.

Daryl Gurney had to be moved away from Gerwyn Price as tempers flared during their Premier League Darts meeting in Sheffield back in 2019.

HAVE YOUR SAY! Do darting bust-ups ruin matches or make them more exciting? Tell us in the comments section

Gurney later apologised having pushed to get to the face of his foe and having to be separated by several officials as the crowd went wild.

SuperChin then said of the incident: "Last night then I would like to publicly apologise for my overreaction in my match with @Gezzyprice we have spoken and he’s accepted this.

"Sorry to anyone that took offence it was such a high pressure match with lots riding on it."

Phil Taylor shoved away old rival Raymond van Barneveld with a clenched fist having beaten the Dutchman in a tense World Darts Championship semi-final in 2012.

The Power later explained "Raymond's a big lad and he has a strong handshake, and when he pulled me, it hurt me.

"I reacted wrongly and I'm ashamed of that because I really like Raymond I'm gutted about what happened.

"It's upset a lot of people and it's also upset me. I've contacted Raymond to apologise to him and hopefully we can put it behind us now."

Adrian Lewis labelled Peter Wright a cheat after he lost 6-5 to the Snakebite at the Players Championship Finals back in 2021 – after a row over a squeaky floorboard.

Lewis got in the face of his rival and had to be sent on his way by officials, later taking to Twitter to express his disappointment.

"I honestly did nothing wrong. Even I was bewildered with what was going on and trying to process it whilst trying to concentrate on my darts."

Two-time World Champion Lewis was suspended after poking the face of rival Jose Justicia during a UK Open qualifier clash in Wigan. Jackpot warned the Spaniard not to "p*** him off" and the pair had to be separated by security after Lewis had wrapped up the match with a double seven.

Lewis then said: "I deeply regret that my frustrations got the better of me as I felt that my opponent was trying to provoke me."

Price beat Anderson in a bad-tempered Grand Slam of Darts final back in 2018 as the pair clashed verbally on several occasions.

Two-time world champion Anderson even pushed Price after one over-the-top celebration, with Price mocking his opponent as he won the Eric Bristow trophy.

"This trophy means a lot to me, it's the first ever one named after Eric so nobody can take that away from me. I go down in history now, happy days."

In all fairness to Seigo Asada, James Wade created this battle all on his own as he came from 2-1 down to win 3-2 during a game in which he twice shouted in the face of his opponent.

Following a strange post-match interview, Wade apologised to his opponent.

He said: "Seigo Asada is a great player and I would like to say sorry to him, the fans and the PDC.

"Anyone that has followed my professional career will know that this was very out of character for me and I am disappointed with myself in the way I acted both on the stage and in the interviews after the match."