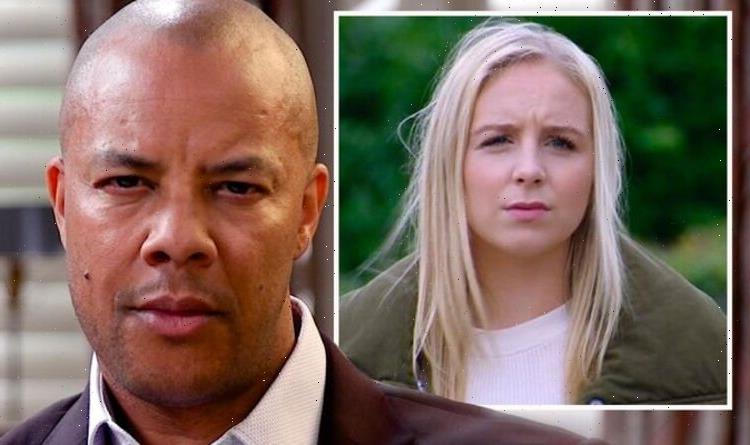 Belle (played by Eden Taylor-Draper) has been taking a back seat from the drama on Emmerdale recently, with the character being a source of support for her family following Marlon Dingle’s (Mark Charnock) stroke. The young woman hasn’t had time for a romance really but this could all change in upcoming scenes on the ITV soap. This is because it seems she is going to be spending a lot more time with the man she was going to call her father-in-law, Al Chapman (Michael Wildman).

The drama begins in next week’s episodes as Belle decides she wants to pursue a new and exciting career path in the village.

At the same time, Al is also looking for work, given how his plans to renovate the Woolpack into a block of flats failed miserably.

Al is a ruthless businessman through and through and he will take any chance he can get to take an idea and run with it as his own.

With this being said, as he listens in to what Belle is suggesting could be her next big venture, he sneakily decides to steal it as his own.

Belle will have no idea he has been doing this but to make sure she is on side, Al could use his charm to try and win her over.

If she were to discover he was trying to steal her ideas, the businessman could flirt up a storm with Belle to distract her from what he’s doing.

Al knows he can manipulate someone if he takes the more romantic approach with them and the young Dingle woman could fall for it hook, line and sinker.

Although the businessman is supposed to be in a relationship with Kerry Wyatt (Laura Norton), he wouldn’t care as he would want to get his foot back on the ladder.

As Belle falls under his spell, the pair could start sleeping together as the businessman promises her the world and more.

Cain and Al’s feud is not over

Although Belle is quite savvy, she has been known to fall under the influence of men before, which has got her into sticky situations in the past.

The young woman has also been known for dating older men before, for example, she had a romance with Dr Jermaine Bailey (Micah Balfour) when she was 17-years-old.

He was married at the time and when their affair was exposed, his relationship crumbled and so did his fling with the teenager.

Unfortunately, with Al, it is unlikely a romance would actually form as the businessman always has ulterior motives.

Belle could be left distraught if she discovers he was just using her as a pawn in his game and he is going to make a business with her ideas.

The young woman might think exposing their affair would destroy him but he wouldn’t care if Kerry found out about them, frustrating Belle even more.

However, the one person who could knock him down a peg or two would be Belle’s older brother, Cain Dingle (Jeff Hordley).

For ages, the village bad boy has had a feud with Al and he would love nothing better than to see the businessman six foot under.

Knowing his archenemies has now messed with his sister, Cain would make it his mission to make sure Al was silenced once and for all.

This could be the catalyst for the big stunt Emmerdale bosses have teased to coincide with the Cain and Al storyline reaching ahead.

Producer of the show, Laura Shaw, spoke with Express.co.uk and other media to explain the two men would go head to head again this year in an explosive storyline.

The soap boss said: “We’re never ones to shy away from stepping outside of our comfort zone and usual storytelling style.

“We do have a very special episode coming up, which we’re about to start shooting quite soon actually.

“This episode is going to spark off one of our biggest stories for this year, but in a different way. It’s something we’ve not done before.

“It’ll enable the audience to see the story from a whole different perspective to usual. I don’t think I can say much more than that without giving it away.”

Laura added: “I can also confirm that we do have one of our big special weeks planned for later in the year, which will contain the culmination of some of our biggest stories as well as the start of other big stories.

“And fingers crossed, COVID permitting, hopefully, we’ll throw one of our infamous stunts in there as well.”

Executive producer Jane Hudson said: “I think we can probably tease in our special week that Cain and Al’s feud is definitely not over.

“Something will happen that will make those two have to look at their relationship with each other.

“So there’s definitely going to be an explosive Cain/Al moment in our special week. I think the audience are really enjoying these two men constantly at war.”

Will Belle be the character to bring the men’s war to an end?