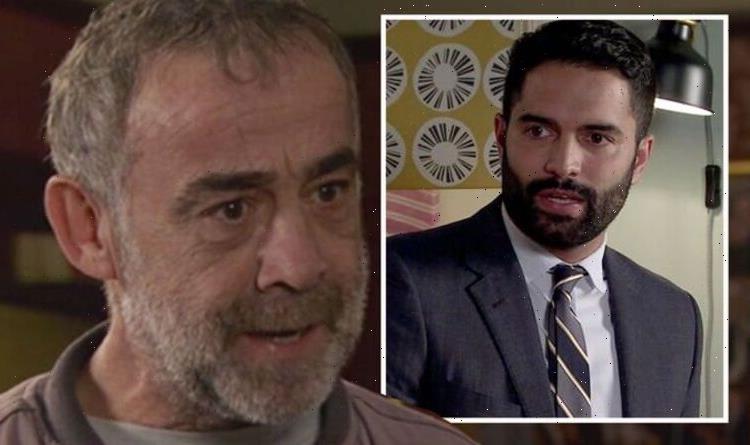 Imran (played by Charlie De Melo) has been trying to hide the fact he is the father of Abi Franklin’s (Sally Carman) newborn from his partner, Toyah Battersby (Georgia Taylor) for months on Coronation Street. However, the most recent instalment of the ITV soap saw his world crumble around him as his other half discovered his name was on baby Alfie’s birth certificate. Kevin (Michael Le Vell) also wasn’t happy to hear his wife had cheated on him with the lawyer and it seems the mechanic will want to take revenge on the solicitor.

Kevin had come across the birth certificate whilst looking through Abi’s bag, believing she could have been back on drugs after losing the first round of her custody court case earlier this week.

Instead, he found the documentation and he didn’t waste any time in taking a picture and sending it to Toyah, who was just about to go into a meeting to discuss adopting her foster daughter.

Unfortunately, with the anger building inside her, she blew up at Imran in the meeting as his secret was exposed to social services.

With it seeming his relationship was over for good, he went to the Rover’s Return to drown his sorrows and he told Abi how their secret was no more.

Just as the pair were wondering what to do next, Kevin arrived at the pub and decided to confront the lawyer about his sleazy ways.

“Another secret conversation, the proud parents,” Kevin commented as he made his presence known, with Abi telling him the pair weren’t proud of what had happened.

Imran made the whole situation about him as he told the mechanic because the pictures of the birth certificate had been sent to Toyah, his relationship was over.

“Oh, your life. And what about me and Jack [Webster]? Because it’s not our fault,” the mechanic said, which made Imran realise how selfish he’d been.

Although the lawyer apologised, Kevin continued his character assignation, telling his neighbour: “You just like playing the good guy.

“Swooping in, helping all the little folk when all along, you’re just a walking disaster,” the father of three continued.

You want to hit me, just do it

“Look, Kevin, if you want to hit me, just do it,” Imran remarked, with the mechanic replying: “You’re not worth it.

“Neither of you are,” he added as he gave a scathing look in Abi’s direction, telling them: “Have a nice life. Between the two of you, I hope you don’t mess up baby Alfie too much.”

Kevin had made it clear he was not a fan of Imran’s by any stretch of the imagination and he would rather not see him again.

As the lawyer tried to smooth things over with Toyah, the mechanic was once again seen in the Rovers drinking alone before Abi arrived to speak with him.

“I have no idea what to say to you to make this right,” the new mother said, with her husband telling her to “save her breath”.

After admitting she was still in love with him, Abi told her husband: “You should know by now this is what I do to people I love.”

Kevin replied: “I do know you Abi. I know how much you suffered and everything you went through.

“I’d like to help you but I don’t think I can. I have to look out for myself and Jack,” the father of three commented.

“You’re better off without me. Like Alfie probably is and all,” Abi said, leading her husband to take pity on her as she bared her soul to him.

“It’s true, though, isn’t it?” she continued with her husband telling her even he didn’t know what to think anymore.

It seems in some way, Kevin is still holding a torch for his wife and in upcoming scenes, he could decide he is going to take her back.

In doing so, he could tell her he is going to adopt her son and they are going to build a family together by moving on from their past.

However, the mechanic knows Imran would have to be out of the picture for good so he could pay the lawyer a little visit.

Knowing how much Imran’s job means to him, Kevin could threaten to report him to the board to tell them he was representing the mother of his son during her custody cast.

This was a huge conflict of interest and he knows if the courts knew about the foul play, he would be struck off and his life would be ruined.

With no way out of his predicament, Imran would have to accept his fate and agree to leave Weatherfield for good and never return.

It was reported last month the actor who plays Imran, Charlie, is set to leave the cobbles after five years in the role.

An unnamed source explained: “Charlie’s loved his time on the soap but the time is right to try new things.

“He’s hugely talented and very ambitious and wants to see what else is out there. He will always cherish his time in Weatherfield but for now, it’s goodbye,” the insider told The Sun.