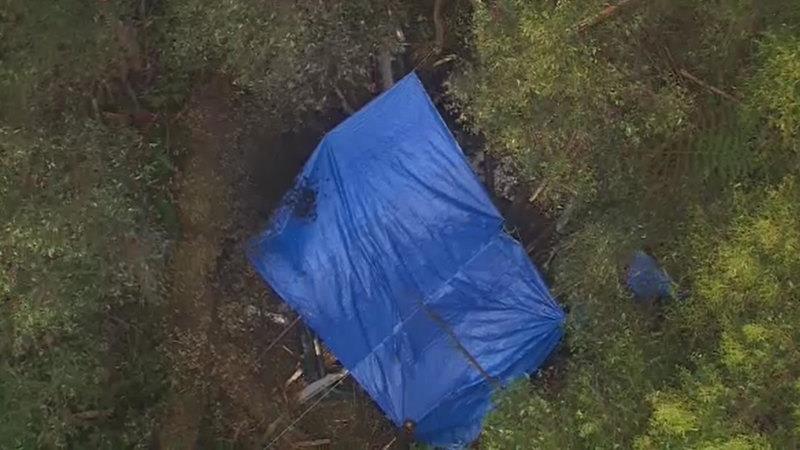 Investigations into what caused a catastrophic helicopter crash at Mount Disappointment north of Melbourne have entered their second day, as transport safety experts roll in to take the reins at the scene.

The crash in rugged bushland near Blair’s Hut killed five people; among them, the pilot – a 32-year-old man from Cheltenham – and his passengers, a 50-year-old woman from Inverloch, a 73-year-old man from Albert Park and two men from NSW, aged 59 and 70. 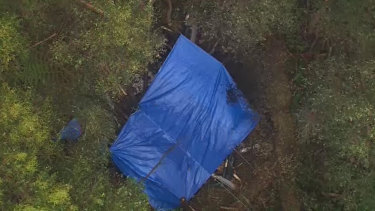 The site of the helicopter wreckage at Mount Disappointment.Credit:Nine News

The identities of the five people who died in the crash remain unknown, however, Victoria Police said on Thursday evening the four passengers were on a business trip headed to Ulupna near the state’s northern border.

They had planned to reach area on Thursday afternoon.

Emergency crews remained at the scene of the crash overnight on Thursday, and Today reported from Mount Disappointment on Friday morning heavy machinery was hauled in to help those on the ground access the wreckage. 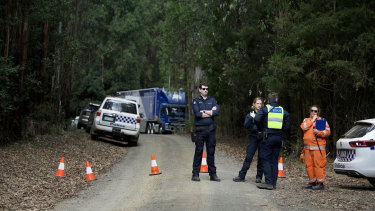 Police on Thursday at a command centre at Blair’s Hut, about 8 kilometres from the crash site.Credit:Marta Pascual Juanola

Victoria Police Acting Inspector Josh Langelaan said on Thursday evening bulldozers and excavators were brought in through the day to deal with the rugged terrain.

“Access is very difficult,” he said. “Our search and rescue members this afternoon had to rappel down from the police airwing to gain first access to the site.

“Our focus and our thoughts are with the families and friends. It’s a terrible accident and we will be working very closely with the next of kin and family and friends through this.”

The Australian Transport Safety Bureau has deployed a team of transport safety investigators from its Canberra and Melbourne offices with expertise in helicopter operations and maintenance, and aerospace engineering.

Acting Inspector Langelaan said the bureau would take over the investigation from Friday.

The weather at Mount Disappointment is expected to be among the factors probed by investigators, as the Australian Maritime Safety Authority flagged their initial aerial search on Thursday was hampered by “heavy fog and cloud”.

The authority was first alerted to the incident about 8.30am on Thursday.

The safety bureau investigators will examine the wreckage and the crash site’s surrounds, and retrieve any relevant components that they can take back to the bureau’s technical facilities in Canberra.

They will also analyse any recorded data and interview those who have knowledge of the flight.

Emergency crews initially spent Thursday searching for the crashed helicopter, which was one of two aircraft travelling in a convoy on a private charter from Melbourne when it lost communication with the second group in low-hanging clouds at 8am.

The aircraft, owned by charter company Microflite, took off from Moorabbin Airport before picking up passengers in the city en route to Ulupna.

Six people were in the other helicopter, which landed safely nearby at Mangalore after the incident before returning to Moorabbin.

“I extend my deepest condolences to all affected by this incident, who we are supporting through this difficult time,” he said in a statement.

The Australian Transport Safety Bureau is expected to release a preliminary report into investigators’ findings in about six to eight weeks.