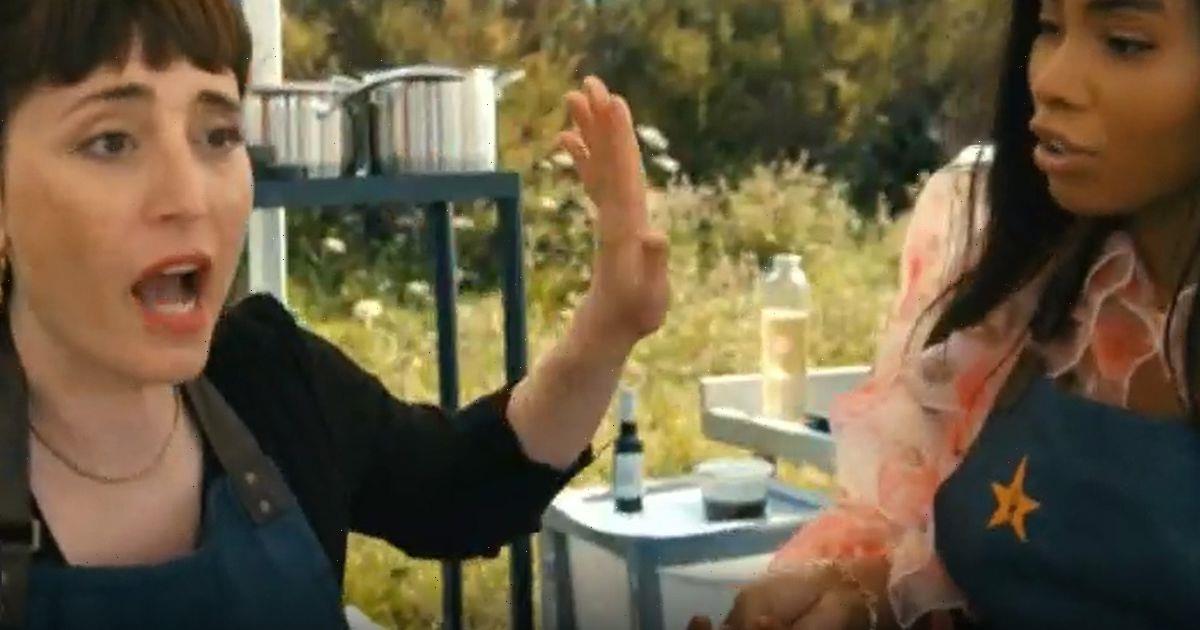 Michelin-starred chef Gordon is on the hunt to find Britain's next food star in his latest cooking show Future Food Stars, which premiered on Thursday night (March 31).

The Apprentice-style show sees 12 hand-picked food and drink entrepreneurs compete to impress Gordon in a bid to secure a huge £150k investment.

Each week, the hopeful entrepreneurs must take on relentless challenges in order to demonstrate they have what it takes to bag Gordon's time and cash.

However, things got heated in the first episode on the show, which saw the Food Stars cook to beach-goers on the coast of Cornwall.

A fiery argument broke out between teammates Valentina and Victoria as they prepared sample dishes from their menu.

It all started when number-cruncher Victoria complained about the price of the team's specialist vegan mushrooms dish, branding them "really expensive".

Victoria was supervising the team's finances to ensure they made enough profit in the task.

However, Valentina disagreed before Victoria told her not many customers would buy the dish, and that they should use regular msuhrooms instead.

She said: "Valentina, to be completely honest with you, how many people are gonna buy a vegan dish? Use the mushrooms that are less expensive. Come on, it's a no-brainer.

"Why are we choosing specialist mushrooms in a vegan dish?"

Valentina looked far from impressed with her teammates take on the issue, replying: "Because you have to please everyone, not just the vegans"

Cutting her off, Victoria said: "Can I make a decision. As you have put my responsible for finances…"

Victoria later said she put herself in the position, but Valentina told her she knew how to do food pricing as she runs her own restaurant.

Speaking about Valentina later, Victoria said: "Valentina's very strong on what she wants to do and if she's decided that she wants it and you disagree, you're enemy Number One."

When Victoria said she wasn't going to play nice, Valentina told her: "You're going to stop it now," adding: "This is not okay. I'm not even engaging with you."

Victoria fired back: "Well you're going to have to, because we're working in a team."

Furious Valentina then said: "I just want her [Victoria] to shut up!", but VIctoria walked over and replied: "I'm not going to shut up. You can't tell me to be quiet. I have to talk."

Valentina ordered her to "stay away", adding: "I don't want you any closer to my face. Move!".

Later on, Valentina said she was "furious", telling the camera Victoria hadn't weighed the mushrooms so didn't have any grounds to claim they were too expensive.

However, it was Valentina and Victoria's Green Team who won the task with a profit of £754.40.

Red Team were the losers, and it was Vincenzo who got the boot.

This is a live TV story and is constantly being updated.

Please refresh the page regularly to get the latest TV updates.

TV & Showbiz reporters are working to source the latest information, reaction, pictures and video related to this story.

Or like our Daily Star Showbiz Facebook page to get the day's biggest stories, and have your say on them.

Why not also subscribe to receive our regular Daily Star showbiz newsletters?

You can do this on this page by simply entering your email address above and hitting 'subscribe'.

Download the Daily Star app for flash alerts on the biggest stories of the day, so you don't miss out.

Why not also subscribe to receive our regular Daily Star news bulletins? You can do this on this page by simply entering your email address above and hitting 'subscribe'.