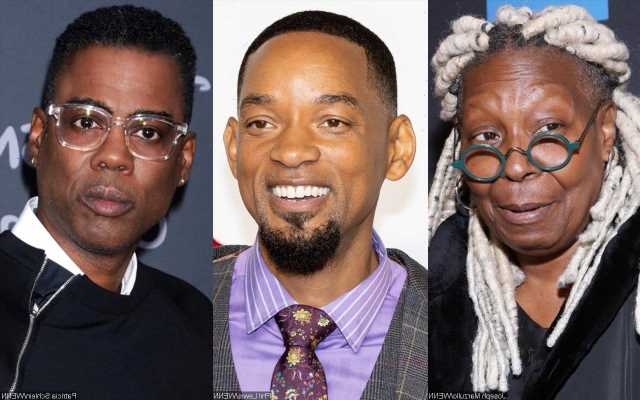 In addition to saying that the Academy won’t take the award from the Best Actor winner, the co-host of ‘The View’ believes that the ‘King Richard’ actor just ‘overreacted.’

AceShowbiz –Whoopi Goldberg has weighed in on the Oscars incident between Will Smith and Chris Rock. The Oscar winner, who hosted the ceremony four times, predicted that the Academy won’t take the “King Richard” actor’s award after he slapped the “Saturday Night Live” alum during livecast.

In the Monday, March 28 episode of “The View“, the 66-year-old co-host guessed that Will, who took home Best Actor award for his performance in “King Richard“, is going to keep his statue. “We’re not going to take that Oscar from him,” she said, “There will be consequences I’m sure, but I don’t think that’s what they’re going to do, particularly because Chris said, ‘Listen, I’m not pressing any charges.’ “

“I think he overreacted,” Whoopi said of Will, before pointing out that Chris took aim at Will’s wife during his hosting gig at the 2016 Academy Awards. “In 2016, Chris was the host of the Oscars that year, and it was funny. I would’ve been a little annoyed,” the hostess recalled, “But [this year] I think [Will] had one of those moments where it’s like, ‘G-D-it. Just stop. Just stop!’ “

Whoopi opined, “You’ve got all the pressure of hoping that you win and trying to keep your face. I get it.” The “Sister Act” star added, “Not everybody acts the way we’d like them to under pressure, some people just snap. He snapped.”

“I don’t know if they spoke, or if he apologized or not. All I know is, sometimes you get to a point and you behave badly,” Whoopi continued. She later praised Chris as saying, “I think it’s remarkable and wonderful that Chris Rock did not take it to that other place it could’ve gone.”

During the talk show, Joy Behar said that she believes “comedians are in danger everywhere.” She reasoned, “They want us to be edgy, they want us to go out there and say things that other people are just thinking, they want us to take a risk, and then they get mad. That’s what’s happening lately — people get mad…To actually hit somebody was shocking, frankly.”

Ana Navarro, meanwhile, pointed out that “hitting somebody is a crime.” She argued, “It was men behaving badly. I don’t think it’s equivalent, because Chris Rock is a comedian. It was a joke. It was a lame joke,” before stressing, “It was a joke in very poor taste… That being said, nothing, nothing, nada, condones violence in this form.”

Sunny Hostin said she “was embarrassed for Will” and “horrified for Chris” as the incident played out. “I thought Chris was the one that deserved an apology for taking the high road,” Sunny pointed out. “He was slapped in front of millions of people internationally and he took the high road in his response. I think that Will was immature, I think he was childish, and I think he was violent… That’s something that we tell our children not to do.”

Less than one day after the incident happened, Will issued a formal apology to Chris on social media. “Jokes at my expense are a part of the job, but a joke about [Jada Pinkett Smith]’s medical condition was too much for me to bear and I react emotionally,” he wrote. “I would like to publicly apologize to you, Chris. I was out of line and I was wrong.”