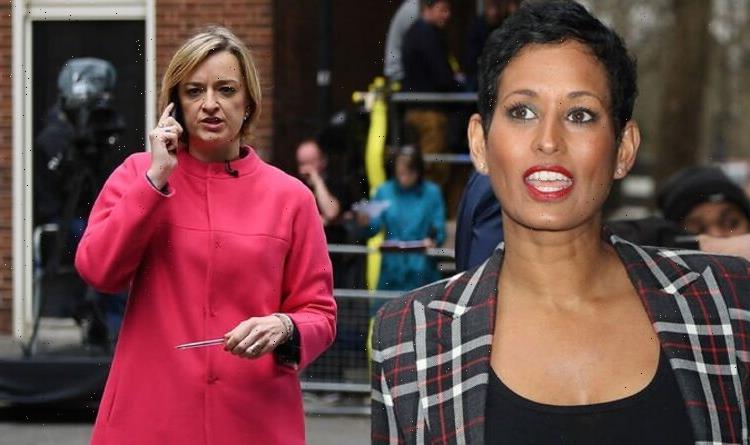 Laura Kuenssberg to step down as BBC political editor

Naga Munchetty has praised fellow journalist Laura Kuenssberg after she announced that she would be moving to the BBC Politics chair on Sunday mornings from September. Naga was quick to congratulate Laura on her exciting new career development.

This afternoon, Laura tweeted out to her 1.3 million followers: “I’m extremely happy to say that I’ll be in the BBC politics chair on Sunday mornings from September.

“It’s a genuine honour and real thrill to be working with an amazing team on the show, can’t wait to get started!”

Laura will be taking over BBC’s Sunday morning politics show as a permanent presenter.

The journalist has spent more than six years as BBC’s political editor.

Laura will replace Andrew Marr as the host of the political interviewing programme as part of the BBC’s reshuffle of its on-screen staff.

Taking over the role in September, Laura will be stepping down from her Political Editor job at the BBC, leaving the position wide open.

According to The Guardian, its former political editor Anushka Asthana and Sky News presenter Sophy Ridge are among those waiting to hear if they have been picked for the role.

She also beat out other journalism industry titans to the position formerly held by Marr for years, including long-term Radio 4 Today programme presenter Mishal Husain.

Many people took to Twitter to congratulate Laura under her announcement post, including a number of journalism industry colleagues.

POLL: Do you think Will Smith was right or wrong to slap Chris Rock? [POLL]

Laura’s news comes after many high-profile journalists have chosen to make a move away from the BBC.

Several presenters appeared to follow in Marr’s footsteps, after he moved to LBC’s parent company Global at the end of 2021.

Newsnight’s Emily Maitlis and outgoing North America editor Jon Sopel have also signed a deal with the company since then, leaving their respective roles at the BBC.

Speaking about their new project, Emily called it a “major new podcast”, while Jon remarked: “Opportunities like this just don’t come along very often.”