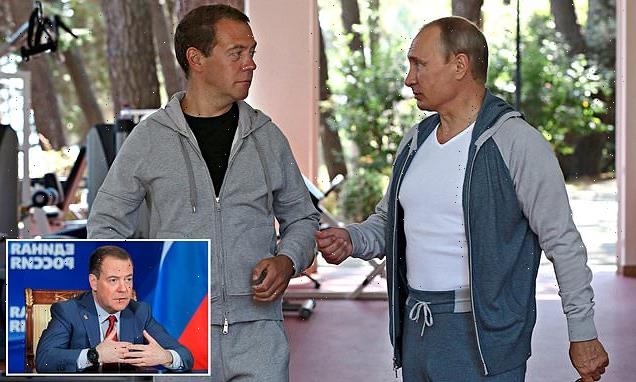 Russia’s ex-president Dmitry Medvedev has said the Ukraine crisis is worse for Russia than the Cold War was.

In an interview with state agency Sputnik News, the politician, who is now deputy head of security council, said during that period Russia wasn’t faced with sanctions on ‘industries, agriculture, and individuals’.

He also said Russia’s counterparts weren’t ‘trying to bring the situation to a boiling point’ then. 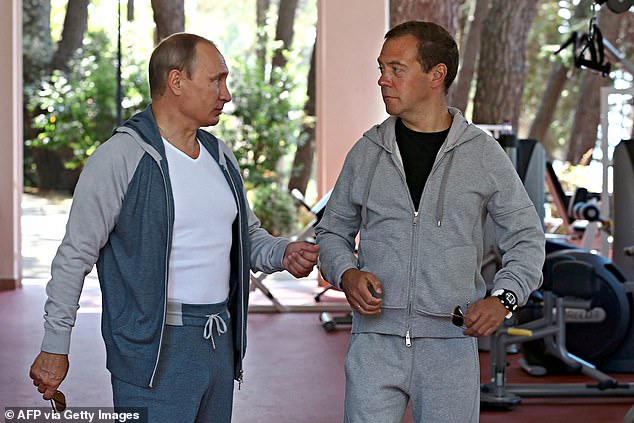 Medvedev (right) served as president from 2008 to 2012, in his election campaign promising to elect predecessor Vladimir Putin (left) as Prime Minister

In the interview Medvedev also claimed the ‘economic war on Russia’ will bring about ‘the destruction of the entire world economic order’.

He added: ‘They are seizing assets of financial institutions and even of the [Russian] Central Bank, and are even talking about foreclosing these assets, about nationalising them in other words. Well, look, this is a war without rules.’

Medvedev served as president from 2008 to 2012, in his election campaign promising to elect predecessor Vladimir Putin as Prime Minister.

It is by many believed Putin, who then became president again in 2012, was a de facto leader at the time, only putting Medvedev in power because he wasn’t constitutionally able to serve a third consecutive term.

Medvedev also told Sputnik that while ‘no one wants any war, much less a nuclear war, which is a threat to the very existence of human civilisation’, it’s ‘obvious’ that this a threat that ‘always exists’. 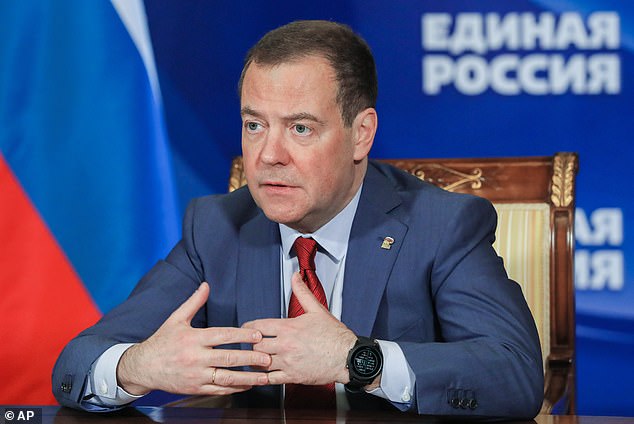 He added that he agrees with those who say that ‘the development of nuclear weapons has prevented a huge number of conflicts in the 20th and 21st centuries’.

In an interview with RIA news agency the ex-president also said there are several grounds under which Russia has the right to use nuclear weapons, including an attack on the country or encroachment on infrastructure as a result of which Russia’s nuclear deterrent forces would be paralysed.

But he added that negotiations – even in the most difficult situations such as those around Ukraine – are Moscow’s preferred path to proceed.

Despite remarking that the situation for Russia is worse and claiming ‘the destruction of the entire world economic order’ is on the horizon, Medvedev also said it is ‘foolish’ to believe that Western sanctions against Russian businesses could have any effect on the Moscow government.

He told RIA news agency in an interview that sanctions will only consolidate Russian society and won’t cause popular discontent with the authorities. 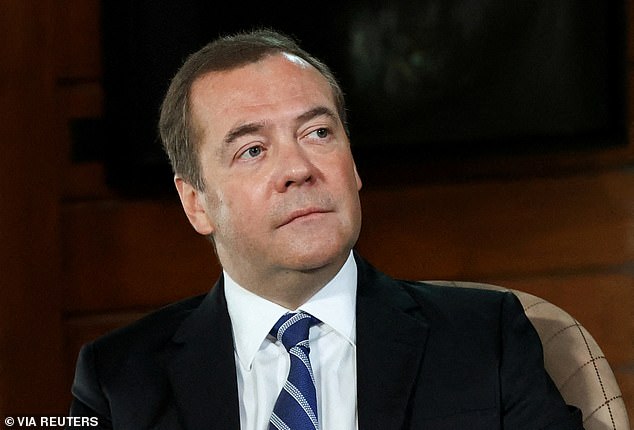 The West has imposed an array of sanctions on Russia following its invasion of Ukraine, but one month into the war, the Kremlin says it will continue the assault until it accomplishes its goals of Ukraine’s ‘demilitarisation and denazification’.

Some of the sanctions have specifically targeted billionaire businessmen believed to be close to President Vladimir Putin.

‘Let us ask ourselves: can any of these major businessmen have even the tiniest quantum of influence of the position of the country’s leadership?’ Medvedev said.

When asked about Russia’s place in the world, Medvedev told RIA news agency that it’s a ‘big, significant’ and ‘very good’ country.

He added its place ‘is destined for it by history and, if you like, by God…And Russia has its own future, its own positioning, its own pride, its own strength, its own opportunities, its own problems.’