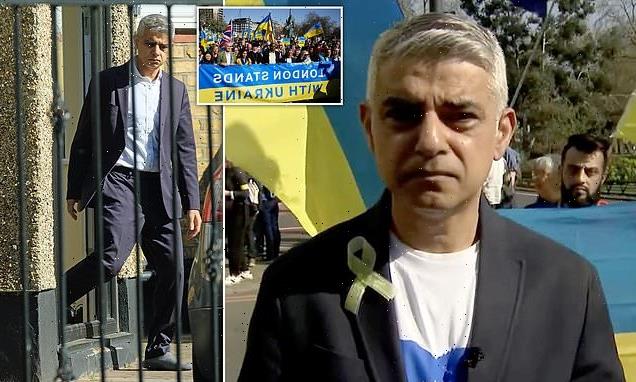 Refugees are welcome – but not at Sadiq Khan’s house ‘because there isn’t enough space’: Mayor announces he WON’T be taking in a family as he attends ‘London stands with Ukraine’ rally

London Mayor Sadiq Khan say he is ‘full of admiration’ for Britons who have stepped forward to house Ukrainian refugee families – but admitted he wouldn’t himself because of a ‘lack of space’.

The Mayor of London joined a huge crowd at Hyde Park for a march and vigil to send a unified message of support to the people of Ukraine this afternoon.

Speaking ahead of the demonstration, Mr Khan praised Londoners for ‘opening our arms’ to Ukraine, and said the UK should be doing ‘much more’ to aid Ukrainian refugees.

But when asked by a Sky News presenter if he would be welcoming a Ukrainian refugee to live with him, Mr Khan said he ‘personally won’t be’.

The Labour politician, who lives in Streatham, south London with his wife and two children, said the decision not to host was down to ‘a variety of reasons, those being protection, security and a lack of space.’

But Mr Khan said Londoners were ‘going above and beyond’ to help, not just donating money to charities but also by opening their homes to those arriving.

‘I’ve been incredibly proud of the actions of Londoners over the last few days and weeks, and what’s clear is that we’ve been sending a message that is loud and clear that refugees are welcome here,’ he added.

Grant Shapps, the transport secretary, is so far the only senior politician to commit to hosting a Ukrainian refugee family, after Boris Johnson ruled out welcoming Ukrainian to No10 on security grounds.

There has however been increased pressure from Tories and Labour to do more to help those fleeing indiscriminate Russian missile attacks.

Mr Khan continued: ‘In relation to this issue, the government has been appalling, we have been lobbying them for weeks now to do what other countries in mainland Europe have done and make it far far more easier for those people fleeing for their lives, refugees, to be able to come to London.

‘There is a disconnect between the generosity shown by Londoners and Brits across the country and the actions of our government – the complex visa forms, the delay, the red tape makes it really hard.

A sea protesters draped in the Ukrainian colours of yellow and blue then made their way towards Trafalgar Square.

Protestors waved Ukrainian flags, held anti-war placards and sported yellow and blue outfits as they huddled together in their thousands and marched on Trafalgar Square for the ‘London Stands With Ukraine’ rally. 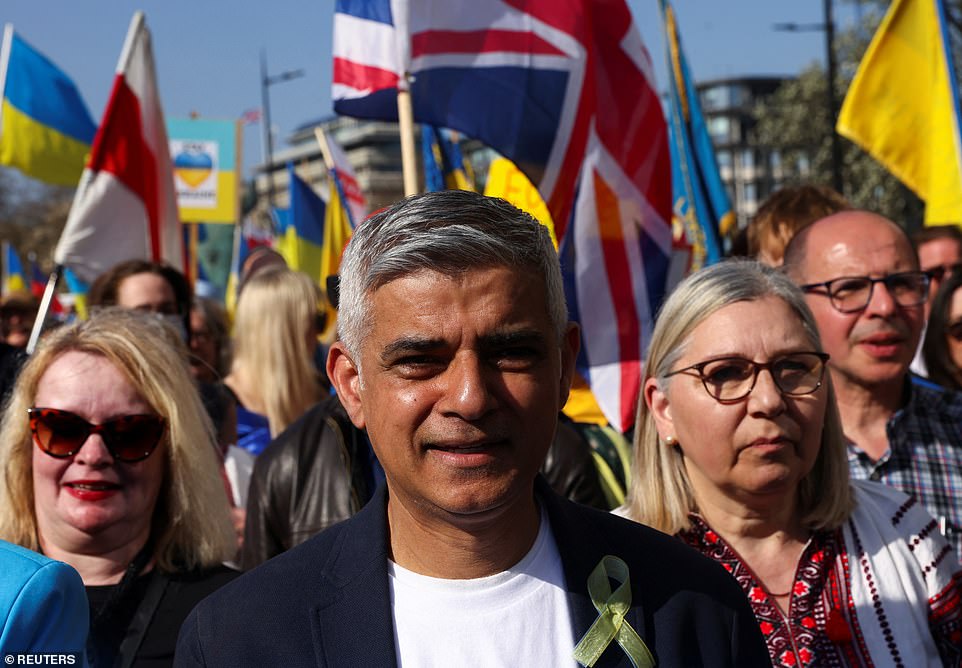 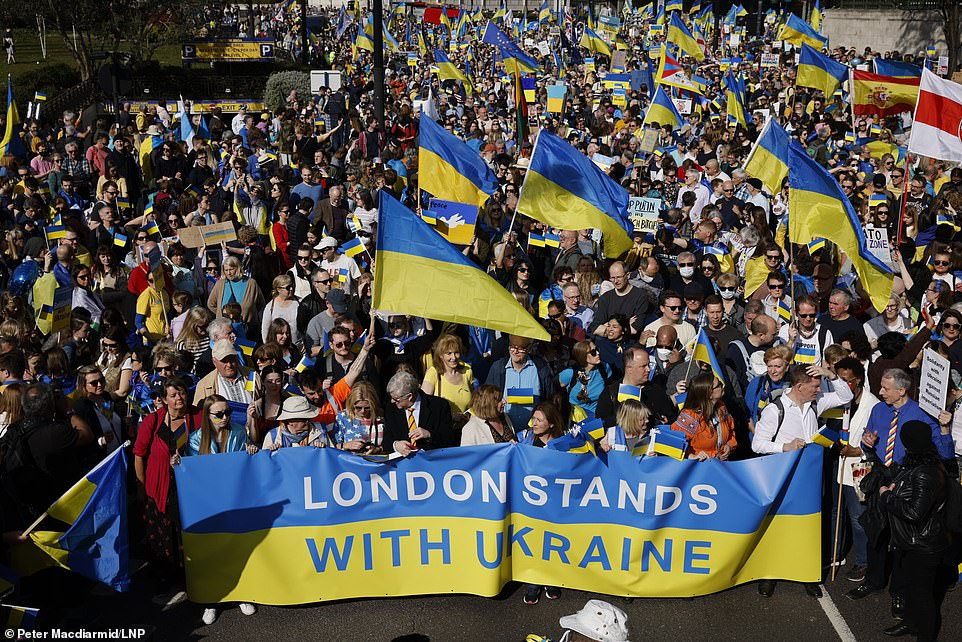 Protestors waved Ukrainian flags, held anti-war placards and sported yellow and blue outfits as they huddled together in their thousands and marched on Trafalgar Square for the ‘London Stands With Ukraine’ rally 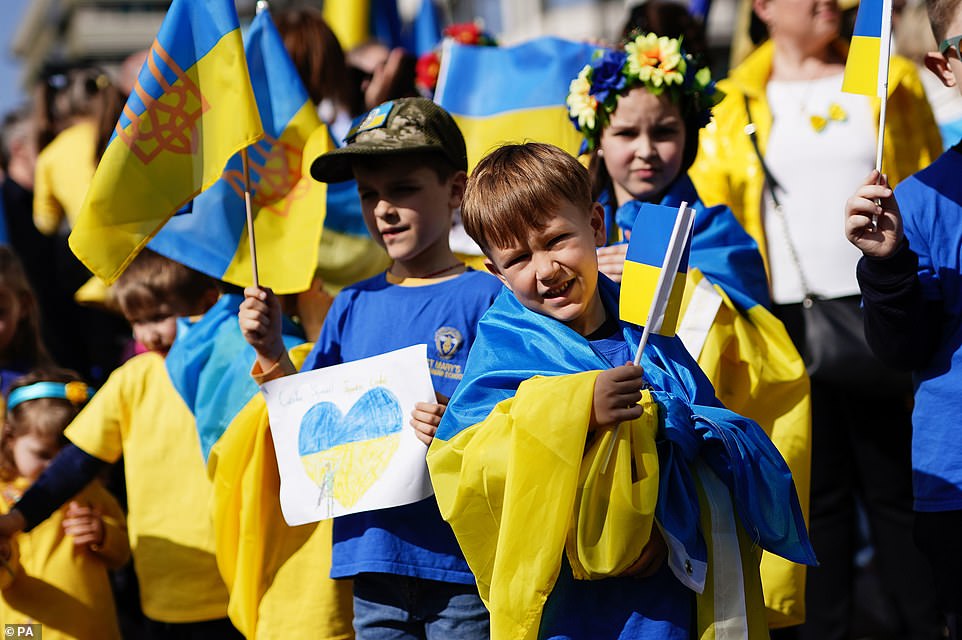 Activists joined with London Mayor Sadiq Khan for the march and vigil, spelling out a strong message of unity and support to the Ukrainian people from the capital. Pictured: Children sported yellow and blue outfits and waved flags 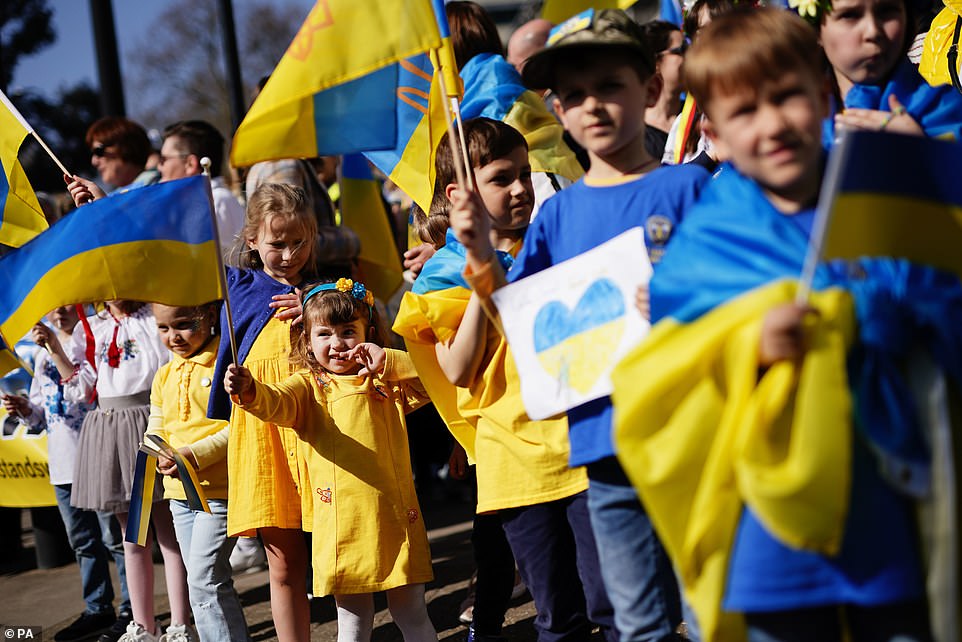 Trafalgar Square has been decorated in the colours of Ukraine, and British, Ukrainian and European politicans are all set to address the swelling crowds later on Saturday afternoon 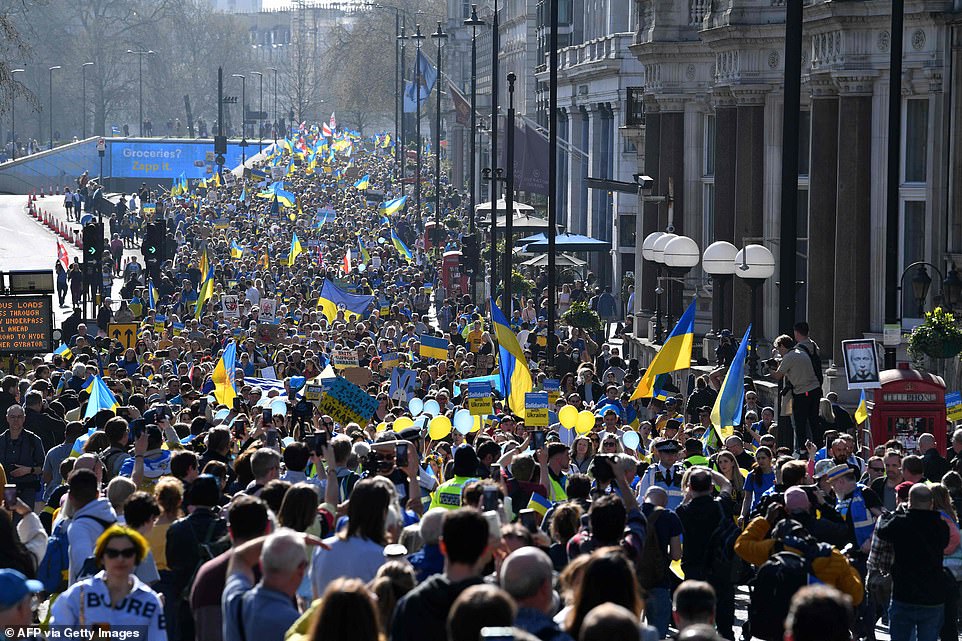 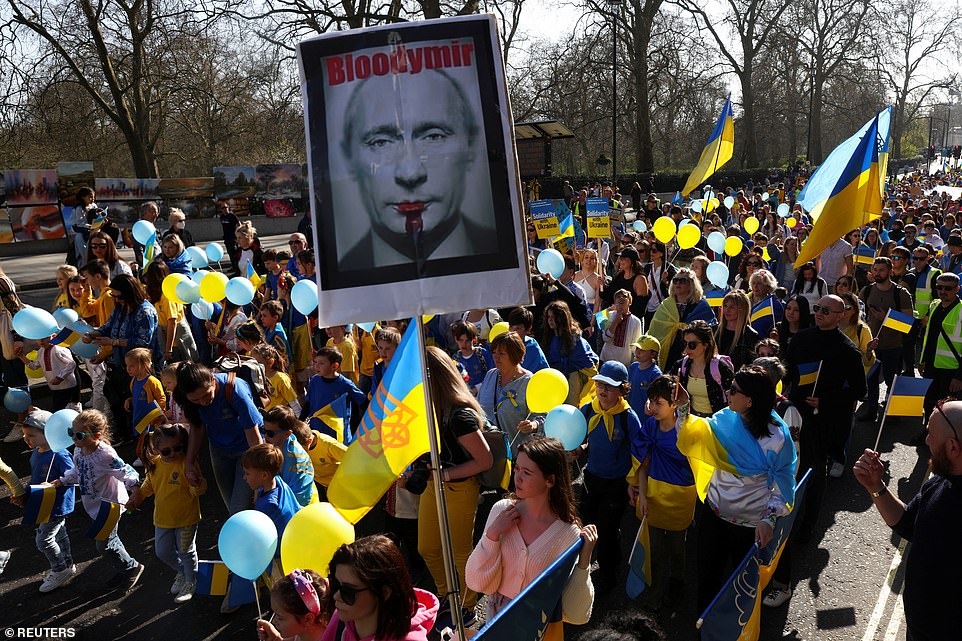 A placard depicting Russian President Vladimir Putin is seen during a demonstration in support of Ukraine amid Russia’s invasion of Ukraine, in central London

‘I’m in touch with the Ukrainian family who are coming to live with us in our home, and so I’m hearing about it direct on the ground. One of my kids is at uni, and as this is for a minimum six months we can use his room [for the family]. I haven’t quite worked out what to do when I comes back.’

‘There are specific challenges around security on housing people in No 10,’ his spokesman said.

‘Various ministers have been asked about this. Obviously it will come down to individual circumstances.’

‘I’m starting to have a conversation with my wife on that and I think many households – as you say, and I’m pleased you brought this up – are probably thinking about this across the country.’

‘I’m exploring what I can do. I know that there are others who have. Without going into my personal circumstances, there are a couple of things I need to sort out – but yes.’

‘I would love to help, without any kind of political consideration or grandstanding …  you will know we are a family of six here in Stalybridge, so we don’t have a lot of room and that might not be as attractive as other places might be.’

Activists joined with Mayor Khan for the march and vigil, spelling out a strong message of unity and support to the Ukrainian people from the capital.

Trafalgar Square has been decorated in the colours of Ukraine, and British, Ukrainian and European politicans are all set to address the swelling crowds later on Saturday afternoon.

Ukrainian refugees from the war-torn nation are expected to speak at the vigil, which is being held from between 3 and 5pm.

They joined in global unison with fellow anti-war demonstrations being held across the world, including Spain, the Netherlands, Ireland, Scotland, Lithuania and Greece.

The scenes come just days after Ukrainian President Volodymyr Zelensky called on European citizens to ‘come to your squares and make yourselves visible’ in a stirring address on the eve of a one-month anniversary of Russia’s invasion.

Mr Khan and Ukraine’s ambassador, Vadym Prystaiko, are among those providing speeches on Saturday. Messages of support are also expected from the Mayors of Brussels, Amsterdam and Athens.

Other speakers today will include MP David Lammy, Chair of the London Assembly Andrew Boff and the President of the Trades Union Congress Sue Fearns.

It comes as President Volodymyr Zelensky this week demanded global protests over the illegal invasion of his country, which has so far cost the lives of thousands of people and displaced more than three million Ukrainians.

Addressing politicians in a stirring speech in English, the Ukrainian premier warned the deadly war was ‘only the beginning’ of Russia’s assault on western democracy.

‘The war of Russia is not only the war against Ukraine. Its meaning is much wider,’ he warned.

‘Russia started the war against freedom. This is only the beginning for Russia on the Ukrainian land. Russia is trying to defeat the freedom of all people in Europe. Of all the people in the world.’

When Russia unleashed its invasion on February 24 in Europe’s biggest offensive since the Second World War, a swift toppling of Ukraine’s democratically elected government seemed likely.

But with Wednesday marking four full weeks of fighting, Russia is now bogged down in a grinding military campaign.

With its ground forces repeatedly slowed or stopped by hit-and-run Ukrainian units armed with Western-supplied weapons, Russian President Vladimir Putin’s troops are bombarding targets from afar, falling back on the tactics they used in reducing cities to ruins in Syria and Chechnya.

NATO estimated on Wednesday that 7,000 to 15,000 Russian soldiers have been killed in the four weeks of war, where ferocious fighting by the country’s fast-moving defenders has denied Moscow the lightning victory it sought. 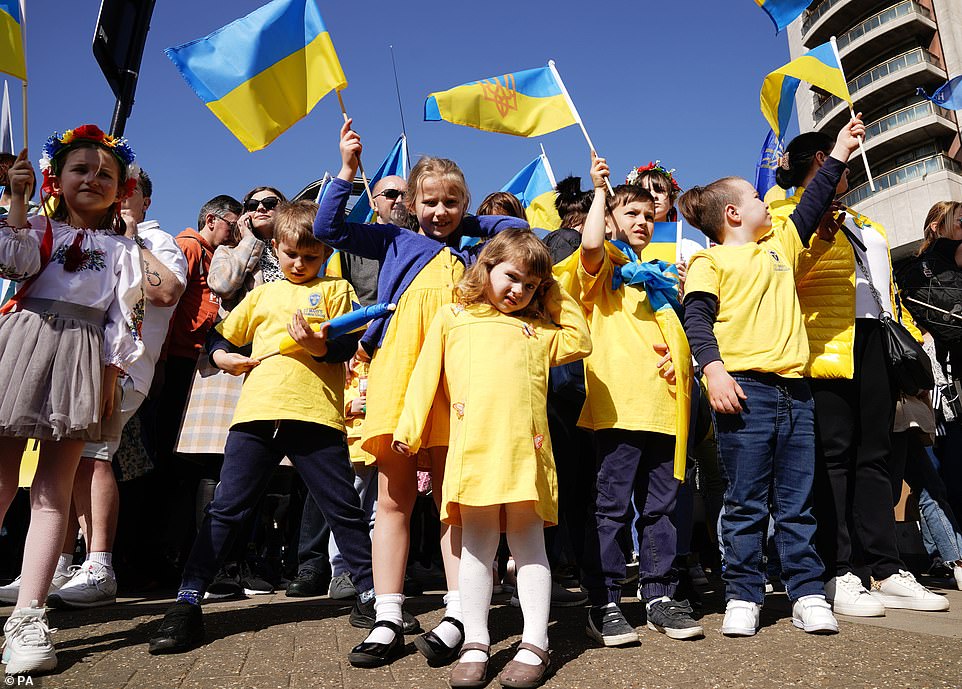 Mr Khan and Ukraine’s ambassador, Vadym Prystaiko, are among those providing speeches on Saturday. Messages of support are also expected from the Mayors of Brussels, Amsterdam and Athens 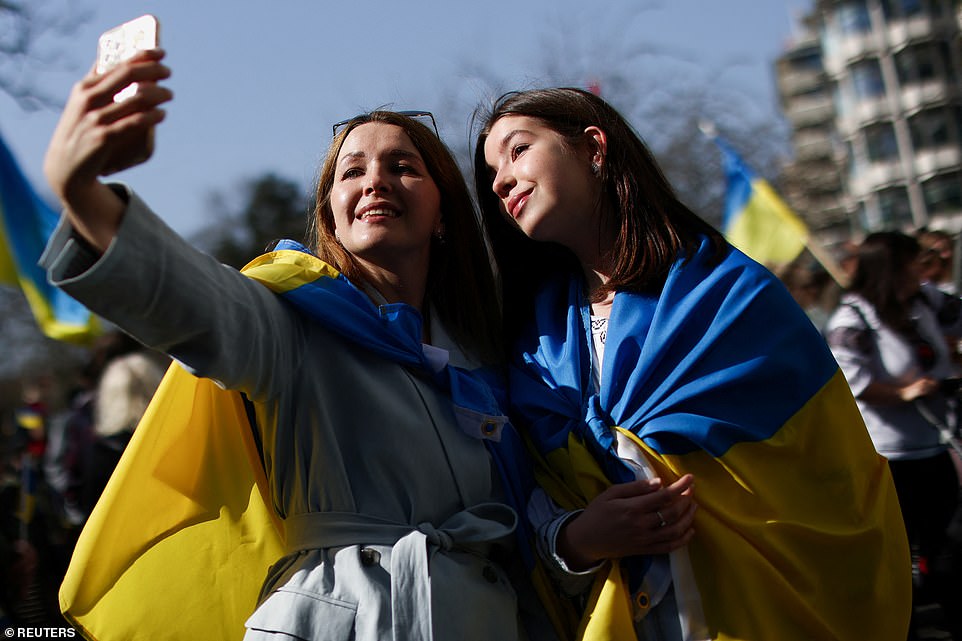 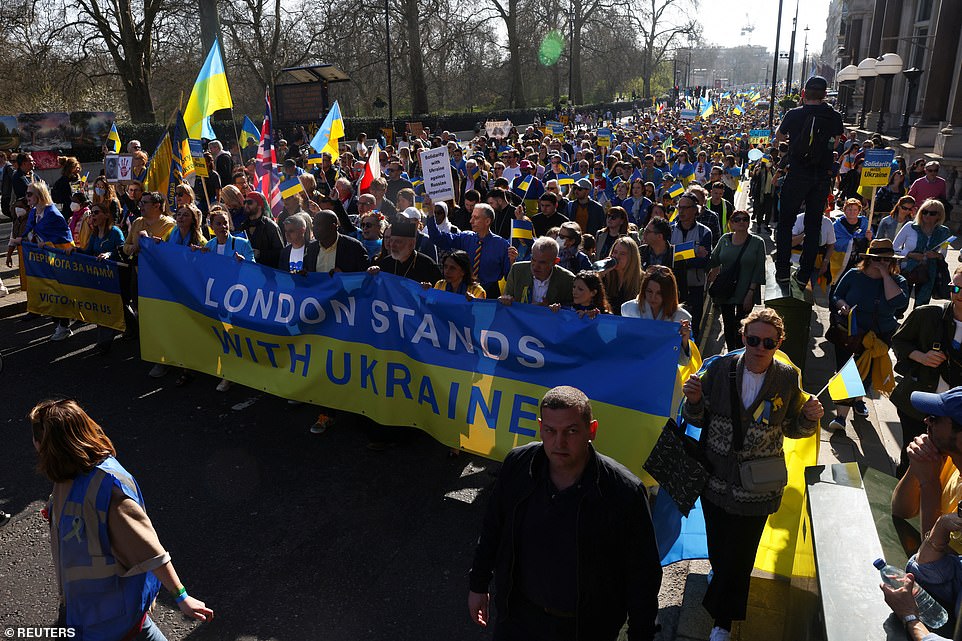 The London rally joined in global unison with fellow anti-war demonstrations being held across the world, including Spain, the Netherlands, Ireland, Scotland, Lithuania and Greece 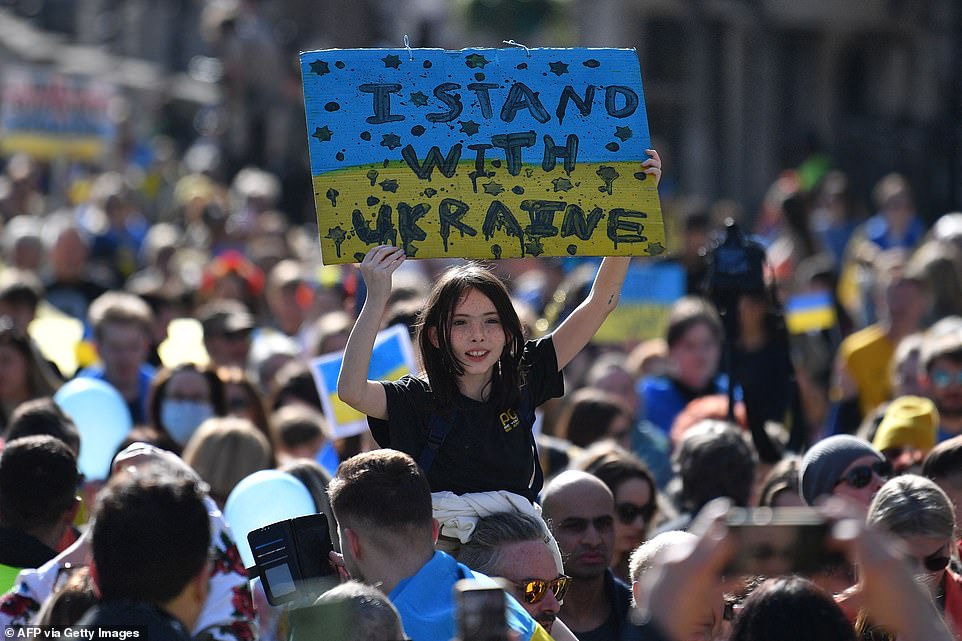 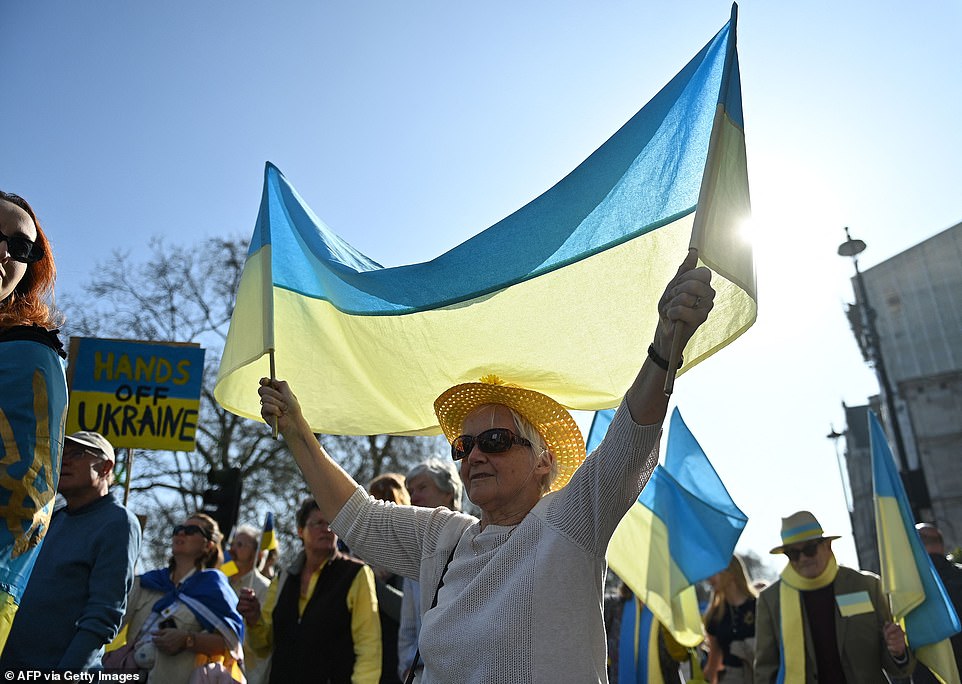 Mr Khan, who organised the march and vigil, is expected to announce over £1million in funding to support Ukrainian migrants, refugees and asylum seekers who have come to London.

In addition, the mayor will provide £50,000 in match-funded donations for the Here for Good Ukraine Advice Project.

In a statement ahead of the march, Sadiq Khan said: ‘I’m proud that today Londoners are uniting in their thousands today to send a message of support to the people of Ukraine. These innocent people have been through unimaginable pain and suffering over the last month, and by joining together today we are showing that we stand with them.

‘I’m also pleased to announce that London will be giving more than £1.1m to support migrants, refugees and people seeking asylum in the capital, including those coming from Ukraine. We have a proud history of providing sanctuary to those fleeing conflict, and this funding will ensure that support is there to help in their time of need.’

Dame Helen Mirren said: ‘It has been devastating to see this horrific ongoing attack against the people of Ukraine, and my thoughts are with them at this terrible time.

‘It’s important that we send a message of support so that Ukrainians know that they are not alone, and I’m proud that the people of London are standing together in their name this Saturday.’