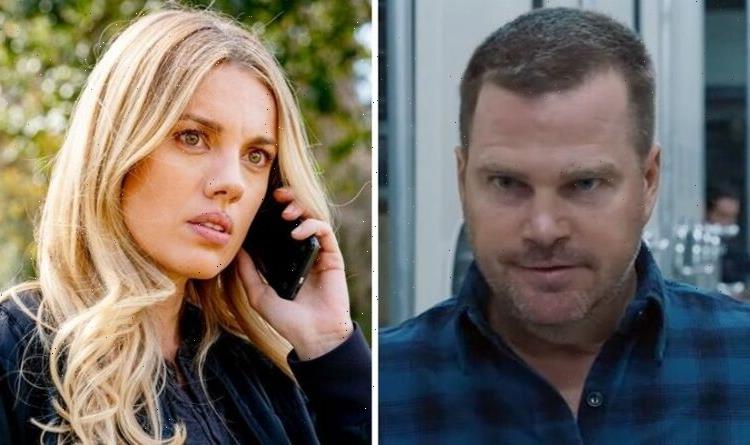 In the next back-to-back episodes of NCIS: Los Angeles’ 13th season, G Callen (played by Chris O’Donnell) finally determines it’s been Katya (Eve Barlow) who has been sabotaging him with eerily convincing deepfake technology. The latest preview for the two-part event on CBS has revealed the entire team could be in danger from the Russian spy’s sinister plan.

In the latest clip, the two agents appear to discuss a recent art heist which the team suspects was orchestrated by Katya.

The synopsis for episode 14, Pandora’s Box, reads: “NCIS investigates the robbery of a high-end arts storage by going undercover as potential buyers on the black market, to find who is behind the stolen items.”

However, Callen is unable to properly investigate thanks to Katya’s efforts to undermine the team’s jurisdiction.

Fatima tells him: “The reason the warrant request was pending was because of you. Apparently, you called the judge.”

“You mean my deepfake did,” Callen replies. “Alright, well, at least now we know it was Katya.”

Callen is all but certain Katya is the one behind his recent identity theft, as she also seems to be using the technology to target his girlfriend, Anna Kolcheck (Bar Paly).

Now she has started using the deepfakes to her own ends, Katya could keep going until the entire team is at our disposal.

Fatima warns: “As long as she’s in control of our deepfakes, the more sophisticated they’ll get. She’ll never stop.”

The quick-thinking team leader realises they could make Katya’s latest scheme work to their advantage, though it could mean undertaking one of their riskiest plays in NCIS history.

“Unless we make her,” Callen thinks. “If she hid it in that vault it had to have been personal. She wouldn’t have gone to this kind of trouble.”

“She probably found out that you had access to your safe deposit box,” Fatima suggests. “And she knew it would lead us here.”

Callen adds: “She couldn’t come get it herself, it’d be too risky.”

Fatima replies: “She knew she would need a warrant to get inside, so she poses as you, contacts the judge.”

The team could be preparing to lure Katya into NCIS headquarters to Callen’s own deposit box to spring a trap on the unsuspecting Russian spy.

As Katya potentially has full access to the NCIS base thanks to her collection of deepfakes, it would be the perfect hiding place for the stolen art.

Callen muses: “Buys herself a little time, she puts together a crew, they come steal it themselves and get out of here.”

Once Katya and her team have broken into HQ to retrieve the stolen art, it will fall to Callen to put together a task force of his own to stop her.

However, it remains to be seen if the NCIS has the firepower to handle the infiltration, or if they’re setting themselves up for a full-scale invasion.

NCIS Los Angeles season 13 continues Sundays on CBS in the USA. A UK release date is yet to be announced.