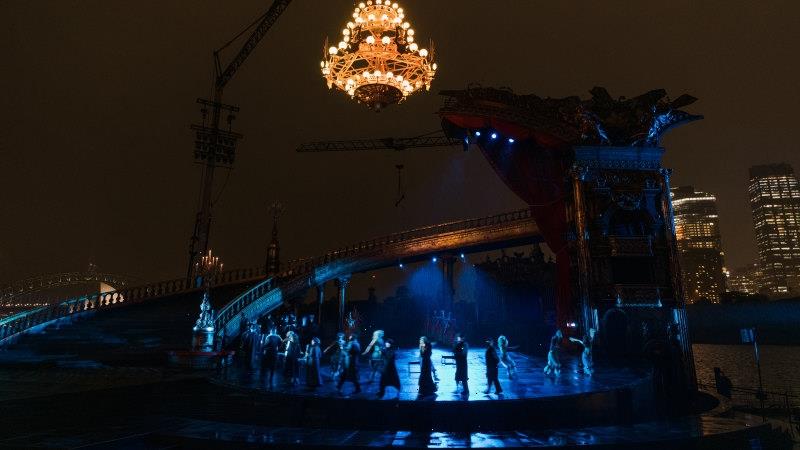 If there was ever an epic tale to sweep us momentarily away from the troubled present, The Phantom of the Opera, suspended against the backdrop of the world’s most beautiful harbour, is surely it.

Opera Australia’s fresh take on the longest-running show in musical history – it premiered 36 years ago in the West End – shrugs off any lingering unfashionable dagginess by grabbing and running with the gothic horror-romance story, earworm hits and high drama. 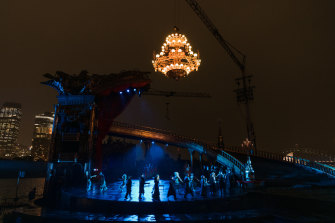 Sydney Harbour provides the backdrop for the first outdoor production of The Phantom Of The Opera.Credit:James Brickwood

Watching this fantastical, old-school stage spectacle outdoors with a backdrop of twinkling planes, bats soaring overhead and the reflections in the harbour of glowing skyscrapers, is simply glorious.

Georgina Hopson shines as Christine Daaé, bewitched and torn by the Phantom’s power and passion, her voice soaring in the damp night air, while Joshua Robson, who must seduce us as much as Christine, brings lusty fury and sinewy heartbreak to the role of the Phantom. Alternately menacing, swashbuckling, anguished and fragile, his path from sinister Svengali to vulnerable and defeated is tingling. 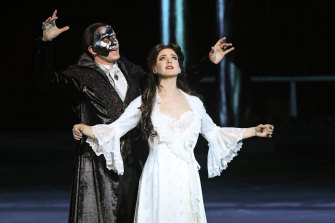 Joshua Robson as The Phantom and Georgina Hopson as Christine Daaé.Credit:Prudence Upton

Callum Francis as Raoul is a gallant and endearing hero while Naomi Johns as prima donna Carlotta is sparkling in her self-centred jealousy. Paul Tabone’s comic umbrage as Ubaldo Piangi bubbles beautifully and Kelsi Boyden (Meg Giry) carries her desire to be the Phantom’s object of fascination with an enigmatic knowing. The comedy is wittily interweaved among the malevolent and murderous plot slices.

And then there is Andrew Lloyd Webber’s orchestration, still familiar even if you’ve never seen the show or even tried to avoid it. Hearing the Phantom’s Music of the Night, as it transfixes Christine after she is led to his lair beneath the opera house, is as unsettling as it is seductive. From All I Ask of You to Angel of Music and the title song, it’s a big fat joy to be swept along by melody, story and high emotion.

This is the first ever fully staged outdoor production of The Phantom of the Opera and, some minor sound issues aside on this opening night, it is more than up to the challenge with its gobsmacking over-water stage framed by a gilded and intricately carved semi-proscenium arch, a majestic staircase sweeping into the stars and, of course, that vast chandelier swinging, sparking and (very gently) crashing before us.

Gabriela Tylesova’s costumes are an elaborate delight, from the Contessa’s lushly hyperbolic gowns to the ballet dancers’ jewel-toned and gossamer outfits and the masquerade party’s bevy of glittering bears, feathered couturiers and pirate-like noblewomen. When the Phantom’s boat glides magically beneath the set’s theatre boxes, it provokes spontaneous “woos” from the audience.

This production manages to respect the work’s iconic bones, elevate its hook-laden score and transport a semi-damp, wide-eyed audience into a spectacle of exquisite song and murder, passion and drama.

“Hear it, feel it, secretly possess you”, by golly, yes. Grab a raincoat and go.