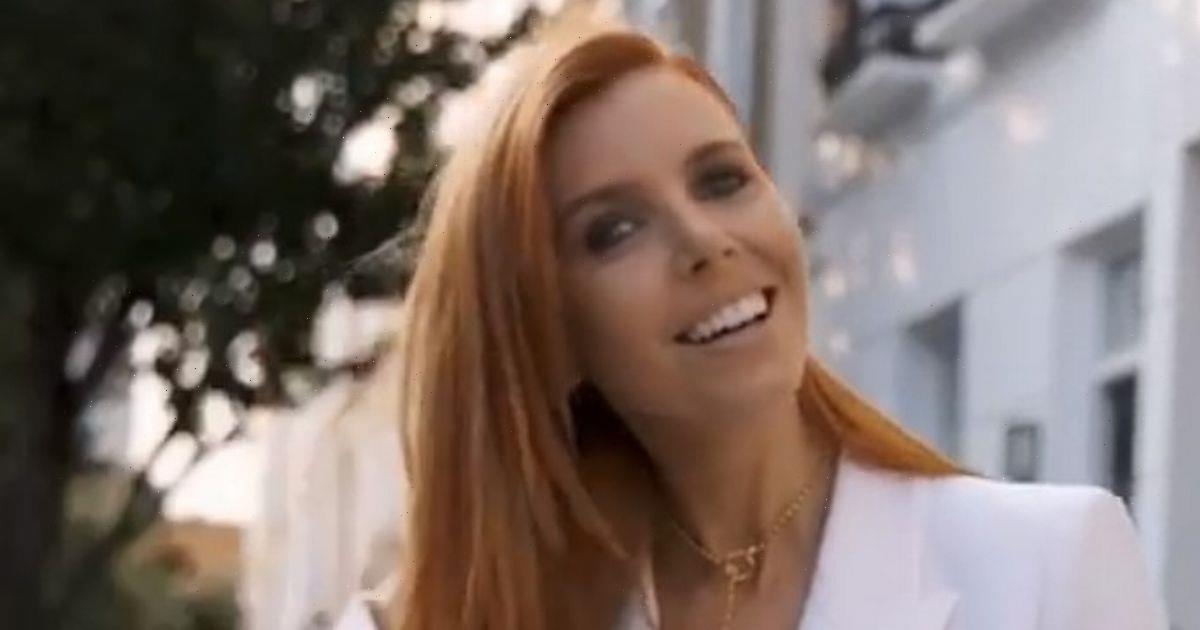 Stacey Dooley debuted her gorgeous new hairstyle earlier this week and it’s fair to say she couldn’t wait to share the results with her loyal legion of fans online.

On Monday (21 March), the 35-year-old documentary maker took to social media as she revealed how she had freshened up her look by “chopping it all off”.

The BBC star showed off her fiery auburn locks after ditching her long tresses as the former Strictly Come Dancing winner posed up a storm in her bedroom.

She slumped against her white leather sofas as she showed off her new do wearing a white crop top which she tucked into a pair of dark denim wide leg jeans to show off her vibrant new look.

Stacey accessorised the casual chic ensemble with a simple gold bracelet and matching anklet which complimented the golden sunset tones in her freshly dyed hair.

The star also showcased her perfectly manicured acrylic nails which she styled with a simple black polish that she matched with her pedicure.

She went on to share some of the behind-the-scenes snaps from her makeover as Stacey ditched her long locks for her new edgy bob.

The starlet revealed her new shade was part of her collaboration with hair stylist company Clairol as she captioned the memorable snap: “Me and @clairol_uk_ire have been BUSY.

“We freshened up my colour (obvs using my shade 8WR golden auburn). And then chopped it all off. I’m SOOOOOO delighted with it!”

And her loving boyfriend Kevin Clifton – who she won the sixteenth series of the popular BBC One dance competition with – was one of the first people to comment on her new look.

He gushed: “I LOVE IT” alongside a heart eyes emoji, as Ashley Roberts chimed in saying she was “obsessed” with her new style.

It comes after Stacey revealed some special rituals that regularly boosts her mental health – and they include shopping, escapism and dancing in her kitchen.

During a recent interview with BBC hosts Dan Walker and Sally Nugent, the documentary star spoke candidly about how she maintains her mental health.

She explained: “I really indulge in escapism. I think that’s massively important.

“Sometimes there’s a tendency to think ‘Oh you know, do I make serious documentaries, or do I write serious books’.

“Actually we were just saying before I came on, dancing about the kitchen, music, nonsense, shopping, all of that jazz, you need it.”

In recent months, Stacey released her new mental health book, titled Are You Really OK?, which looks at mental health in young people.