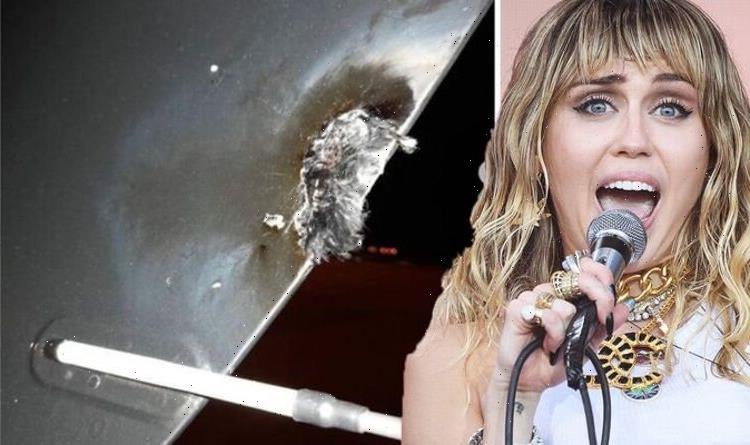 Miley Cyrus shares footage of her plane being struck by lightning

Wrecking Ball hitmaker Miley Cyrus “nearly died” after her plane was forced to make an emergency lightening after it was struck by lightning on Tuesday, according to her older sister, who was travelling with her. The Hannah Montana starlet, 29, was flying with her entourage and sister Brandi Cyrus from Bogota, Columbia to the Paraguayan capital city of Asuncion, where she was due to perform as part of her Attention Tour, when the bad weather struck.

However, the star ended up cancelling her performance following the terrifying incident.

Brandi has now spoken about how the group “almost died”.

Addressing her one million Instagram followers, Brandi said: “I’m going to try not to be dramatic but we almost died.”

She went on to drink a glass of champagne while close friend Val Pina shouted “bottoms up”, before Brandi emphasised again that they “literally almost died”.

She went on: “We just landed in I don’t even know where, 200 miles away from where we’re supposed to land and because lightning struck the plane so bottoms up!”

In a later story, Brandi also wrote: “Just wanted to let everyone know that we are safe and sound!

“We spent all day and night travelling so taking the day to recharge and relax.

“Getting caught in the storm was very scary, but we are all so thankful that the pilots and flight crew handled everything perfectly and got us safely on the ground!” she ended her story.

Brandi’s update comes after her sister Miley shared a terrifying video of the plane making an emergency landing, alongside footage of a dramatic flash of lightning at the window.

Miley took to Twitter and shared the moment her plane was struck mid-flight.

A lightning flash could be seen, which caused the plane to shake.

Sharing a brief video of the incident, passengers could be heard gasping in shock.

Miley also shared a photo of the plane following the aftermath of the incident and the damage caused.

In view of her 46.5 million followers, Miley took the opportunity to reassure her fans she is doing fine.

She penned: “To my fans and everyone worried after hearing about my flight to Asunción. Our plane was caught in a major unexpected storm and struck by lightning.

“My crew, band, friends and family who were all traveling with me are safe after an emergency landing.”

One person declared: “Oh my God!”

In a follow-up tweet, she wrote: “We were unfortunately unable to fly into Paraguay. [Heartbreak emoji] I LOVE YOU.”

Following the incident, Miley explained her scheduled show in the South American region had been cancelled.