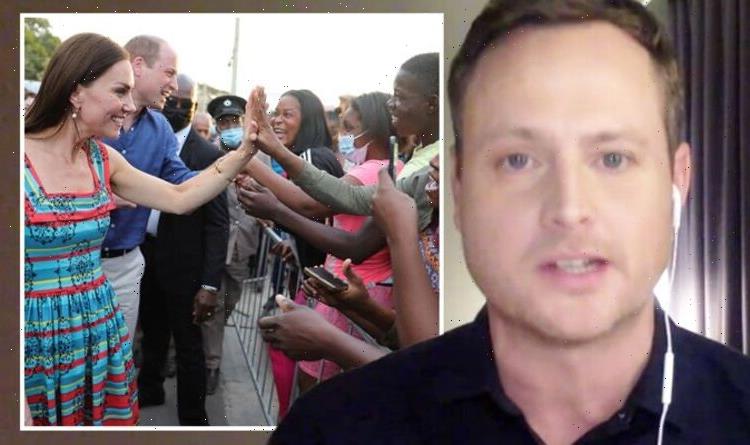 The Duke and Duchess of Cambridge’s tour of the Caribbean has been met with protests in Jamaica, with demonstrators demanding reparations for slavery and its prime minister Andrew Holness already putting plans in place to remove The Queen as head of state. However, Kate and William were still met by hundreds of adoring fans once touching down in Jamaica, with royal expert Russell Myers insisting to Lorraine Kelly they received a “hero’s welcome” amid the ongoing demonstrations.

However, the royal couple have come under fire on social media after a series of snaps from their trip were widely shared.

One such photo showed the Duchess of Cambridge greeting young children through a wire fence in Trench Town.

Another showed the two posing with a Bob Marley statue at the Trench Town Culture Yard Museum.

Given the circumstances and protests surrounding the visit, the photos have since been branded “tone-deaf” and “embarrassing”.

Author Malorie Blackman, for instance, garnered thousands of reactions on Twitter after sharing the aforementioned photo of Kate and locals through the wire fence.

She tweeted alongside: “Do Prince William and Kate employ even one person of colour in their PR depts and run the optics of such images below by them first?”

However, hitting back at the online backlash, Russell insisted the mood is far from negative in the country.

Reporting from Jamaica and referring to the picture in question, he told Lorraine: “I was standing probably just feet away from the couple when they were meeting the locals in Trench Town.

“This was on a football field where William had just been moments before being cheered on by a crowd of hundreds playing football with England footballer Raheem Sterling.

“And I feel very personally about this because when people are commenting on social media and using very tightly cropped images of something like that… with comment comes great responsibility.

“And to see so-called mainstream media platforms sharing something like this, it’s quite distressing and totally unfair.”

The Daily Mirror’s Royal Editor insisted: “You have to take it with context.”

He claimed: “The people of Trench Town really took them into their hearts, they drew huge, huge crowds and they got a hero’s welcome.”

However, he did refer to the protests going on, admitting they still garnered plenty of support.

“Of course, you have to compare that to the protests which are going on,” he continued before warning: “But it’s all about context,

“And it’s particularly dangerous when you’re sharing images like that on social media, I feel.”

While in Jamaica, Prince William has addressed the UK’s history of slavery and expressed his “profound sorrow”.

The Duke added it “should never have happened” and it will “forever stain our history”.

His comments came at a dinner hosted by the Governor-General of Jamaica.

Prince William also commended the spirit of the island that “makes it so special”.

Lorraine airs weekdays at 9am on ITV.