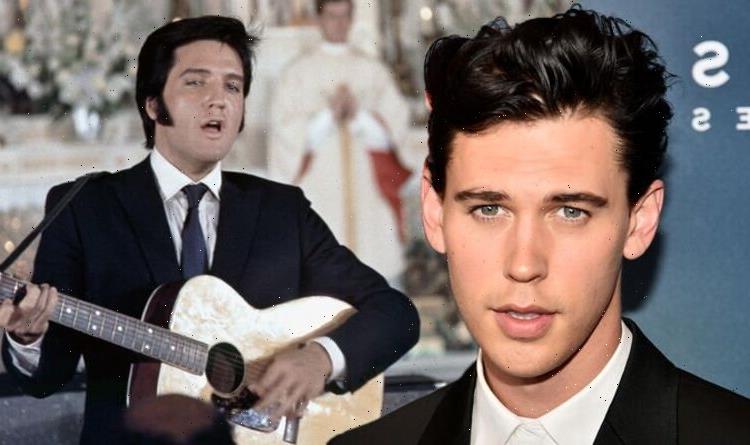 Elvis Presley will once again be immortalised in film form later this year when Luhrmann’s Elvis hits cinemas. Austin Butler plays the King and will guide viewers through the star’s life from relative unknown to the biggest musician on the planet.

During the filming of some scenes in Elvis’ early life, however, Butler stumbled upon an important part of the King’s journey that is often overlooked.

Butler recently spoke about Elvis and how the film is shaping up. During the interview, he was asked about the spiritual “yearning” of Elvis.

The King was a Christian for his entire life, and in his later years looked into other methods of spirituality, as well – such as Kahlil Gibran and Hermann Hesse.

Butler explained how important gospel music was to Elvis in his formative years. He confessed: “You know, I think it was an incredible gift us getting to go down to Nashville and record with some of the most amazing gospel singers I’ve ever heard.”

Butler recalled attending a place of worship while working and thinking about Elvis. He said: “I remember walking into this little chapel, with all these period microphones, and they’re stamping their feet. I stood in the centre and tears poured down my face and chills down my spine.”

Butler called it a “glorious experience” that was hard not to have in your “marrow”.

He went on to add that this profound experience showed him just how much importance Elvis put on religious music.

In fact, Butler explained how this way of experiencing and celebrating music inspired Elvis give off so much expression during his performances.

He said: “It was experiences like that that really showed me how much gospel-influenced Elvis on a musical level, on a spiritual level, on the way he moved, and the freedom of his body.”

It sounds like Butler really became one with Elvis’ memory during filming. He later confessed he had “huge shoes to fill,” but he worked hard to make his voice sound as close to Elvis’ as possible.

Elvis’ songs will be performed by Butler during the first chunks of the star’s movie. When the film moves into Elvis’ later life, their two voices will be blended together to make something that sounds close to both of them.

However, this mindset left him scared over whether he would actually be able to pull it off.

Butler remembered: “What that does is also instils this fear that I won’t be able to achieve that, so that burned the fire inside me to work and work.”

He gleefully added: “I think maybe a year before we started shooting it was six-to-seven days a week of voice coaching and working with the right experts and getting my register in the right place.” (Via The AU Review)