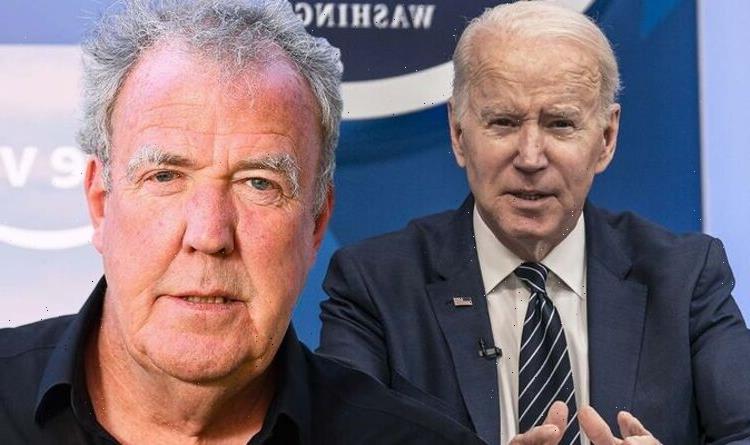 Jeremy Clarkson asks why council should be serving vegan food

Jeremy Clarkson, 61, has spoken out on the devastating war in Ukraine and the deluge of information being distributed about it. The TV presenter also issued a scathing attack on US President Joe Biden as he theorised on the conflict potentially extending to involve a NATO member.

Jeremy claimed that the response to a potential Russian attack would come from Biden and that the US leader was unable to “control his own bowels”.

The TV star wrote in his column for The Sun: “Plus, when they’re asked what would happen if Russia dropped a bomb on a Nato country, we know they can only guess at what the response would be, because the decision would come from Joe Biden.”

“This is a man who can’t even control his own bowels. We are, therefore, left with so many questions.

“What will happen if Putin loses? Would he retreat and pretend it had all gone according to plan? Or would he go nuclear?”

Jeremy went on to wonder what would happen if Putin lost – suggesting places like Latvia, Georgia or Poland would be “next”.

The former Top Gear host recently travelled to Russia for the next instalment of The Grand Tour.

Fans of the Clarkson’s Farm star theorised he paid a subtle tribute to Ukraine.

Jeremy had taken to Instagram to confirm to his 4.6 million followers that he had just crossed over the Russian border.

The post featured a picture of a plane wing against a backdrop of a blue skyline and yellow-tinted clouds.

In the caption, he wrote simply: “Over the Russian border this afternoon.”

But eagle-eyed fans believed that the snap resembled the Ukrainian flag, and interpreted it as a show of support from the presenter.

Instagram user @kazimkatranbayiri asked: “Is that meant to be a Ukrainian flag?”

Other online users were happy to find out a new episode of The Grand Tour was in the works.

Fans of the former Top Gear host simply urged him to stay safe.

“Good to see there will be a new Grand Tour episode”, hrh27003 commented.

However, the filming locations had not yet been officially confirmed.

Some fans had surmised that Jeremy and his co-presenters – James May and Richard Hammond – had been in Norway for the new special.