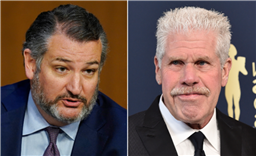 Ron Perlman sent a video message to Ted Cruz on Twitter in which the “Hellboy” actor slammed the Texas senator for his questions at the Supreme Court confirmation hearings of Ketanji Brown Jackson. On March 22, the second day of Jackson’s confirmation hearings to replace Justice Stephen Breyer on the Supreme Court, Cruz questioned Jackson on “critical race theory.” The senator asked Jackson about her role as a board member of the Georgetown Day School, where books such as Ibram X. Kendi’s “Stamped (For Kids)” and “Antiracist Baby” are taught.

Cruz used the book “Antiracist Baby” to question Jackson on whether or not she believes “babies are racist.” Pages from the book, depicting drawings of children in diapers, were positioned on a board behind Cruz.

Cruz also questioned Jackson on why she listed “social justice” as part of the Georgetown Day School’s mission, to which she answered that it was in keeping with the tradition of the school’s history of civil rights. Jackson explained the school was founded at the height of racial segregation in 1945 Washington, D.C. and added, “The idea of equality, justice, is at the core of the Georgetown Day School mission.”

Perlman was one of many people following the Supreme Court confirmation hearing who condemned Cruz’s questioning. The actor told Cruz to “go fuck yourself.”

“Hi Ted, Ron here,” Perlman said in the video. “Listen, I know how tempting it is to appeal to the real lowest form of humanity here in the United States, the bottom feeders, people who pride themselves on hatred and un-education and inability to read and inability to understand the difference between true patriotism and the bullshit you’re selling.

“I know how tempting it is to play to those people,” Perlman continued. “Because at least you have a base, but Jesus Christ Ted, for somebody with a really, really small dick, you get to be a bigger prick every fucking day. Go fuck yourself.”

Perlman sent a second video message to Arkansas senator Tom Cotton, who also received criticism for his questions to Jackson at the confirmation hearing. The actor called Cotton “a fucking white slaver piece of shit.”